Showing posts from October, 2008
Show all
October 27, 2008
//तमसो मा ज्योतिर्गमय // Shubh and Blissful Diwali To All on behalf of Hindu Samhati.
2 comments
Read more
October 27, 2008
Why no outrage over persecuted Hindus? By Richard L. Benkin Chicago, IL, United States, — There have been several attempts at genocide since the middle of the last century. European Nazis murdered 6 million Jews in the 1940s. In the1960s Fulani-led Nigerians slaughtered around 1 million ethnic Ibos who formed the Republic of Biafra. Three decades later, majority Hutus murdered almost 1 million Tutsis in Rwanda, and Serbs did the same to about 10,000 ethnic Albanians in Kosovo. Ethnic Arabs are still killing non-Arab Sudanese; so far over half a million. These crimes grabbed the world's attention – albeit too late and only after the bodies were piled too high to ignore. The United Nations issued proclamations and sent aid through its human rights and refugee organizations. Amnesty International, Human Rights Watch and others loudly condemned the perpetrators, documenting the atrocities and raising money for their aid programs. Several international celebrities took on highly visib
1 comment
Read more

WHY HINDUS ARE ANGRY IN KARNATAKA ?

October 24, 2008
What made Hindus angry in Karnataka http://www.ultracurrents.co.cc/ Francois Gautier [expressbuzz] I was born in a Catholic family. My uncle was a priest, a wonderful man of warmth and compassion and I spent most my early years in Catholic boarding schools. When I was young I wanted to become a missionary and to ‘convert’ pagans in Asia. What I was taught by priests was that Hindus worship false gods and they needed to be brought back to the True Word by Jesus Christ. Then of course, I came to India and discovered that actually Hindus, far from being the heathens, as had been portrayed in Europe, not only believed God’s diversity, the wonderful concept of avatar, but had given refuge to all persecuted minorities of the world, whether the Syrian Christians, the Parsis, the Jews (India is the only country in the world where Jews were not persecuted), the Armenians, or today the Tibetans. I am also aghast at the one-sided coverage by the Indian media of the Christian- Hindu problem:
1 comment
Read more 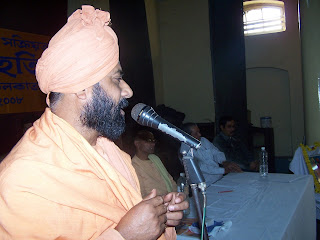 October 10, 2008
The leading Hindu monk of Murshidabad district Swami Pradiptanandaji Maharaj has received a threatening letter from the Murshidabad unit of HUJI and SIMI. With filthy language they have threatened Swamiji to stop his activity. Otherwise he will be killed. They also ordered in this letter, to all Durgapuja committees of Beldanga town, where Swamiji's Ashram is situated, to stop Durgapuja next year as the sound of these Pujas vitiate their body and soul and disturb their Namaz. If they don't obey the order then all the pandals will see bloodbath. District administration took the letter seriously and increased security arrangements in the Ashram. But at the same time it has restricted Swamiji's movement. Swamiji, popularly known as Kartick Maharaj, is a monk of Bharat Sevashram Sangha and he is the President of Beldanga Ashram. He runs 'seva projects' in Murshidabad district. In one of his centers at Chanak near Baharampur in Murshidabad district, 400 tribal girls get
2 comments
Read more

October 10, 2008
Clash breaks out at South Dinajpur pandal Statesman News ServiceBALURGHAT, Oct. 6: People belonging to two communities clashed at a Durga puja pandal at Dewoor, under Kumarganj police station in South Dinajpur district this morning, forcing police to fire in the air, burst tear gas shells and make a baton-charge to bring the situation under control.The South Dinajpur district magistrate and the superintendent of police were among some 20 persons hurt in during the commotion. The police arrested 26 people including four women over the incident. Section 144 of the CrPC has been promulgated in the area and two platoons of BSF have been deployed to help the police keep the situation under control.The incident caused tension in other areas too, with the residents of Baul, which is close to Dewoor, blocking the Balurghat - Malda state highway for three hours after the incident. Police resorted to a baton-charge to clear the roadblock. In retaliation, the agitators attacked the police and da
Post a Comment
Read more

DR. SUJIT DHAR IS NO MORE

October 10, 2008
Dr Sujit Dhar, Member of Central Advisory Council of Vishwa Hindu Parishad, passes away on October 5, 2008. Born on November 5, 1934 in Calcutta, Dr Sujit Dhar had a brilliant academic career all through his student life. A merit scholar in the undergraduate medical course in the Calcutta Medical College, from where he graduated in 1957, he topped the merit list in the postgraduate examination of the Calcutta University in the subject of his specialization Tuberculosis and Chest Diseases. He has to his credit 12 original scientific papers published in leading medical journals. For a long spell of 10 years (1964 – 73), he was the Chief of the Editorial Department of the Journal of the Indian Medical Association. Since 1974, he is practicing in Calcutta as a Consulted Physician and Cardiologist. In his early boyhood he was attracted to RSS movement and as an ardent worker of the organization, shouldered various guidance of the Late Eknath Ranade from 1949 and it was at his behe
1 comment
Read more

October 04, 2008
In last State Committee meeting of Hindu Samhati, it is decided that all units of HS will organise Ideological book Stalls in their respective areas. Ideology oriented books should be collected from various publishers. HS central office will help the workers to collect the books on credit. These stalls will help to propagate our cause.
Post a Comment
Read more
More posts