Showing posts from August, 2014
Show all

August 27, 2014
People of Sandeshkhali were yet to recover from the nightmare of 27th May, 2014, when notorious criminal, racketeer, local TMC leader and Panchayat Upa-Pradhan, Shahjahan Sheikh and his gang, attacked local villagers at Rampur Gayen Para Halder Bheri area under Sandeshkhali P.S of North 24 Parganas District without any provocation and randomly fired on them resulting severe bullet injury to 26 Hindus. Exactly within 2 months from that attack, the Hindus at that area have, again, found themselves at the receiving end of attack of Shahjahan Sheikh. It is reported that today morning , local Hindu youths – Amay Bhuia (Gora), Anup Mandal & Paresh Mandal were called at Sarberia school ground at around 11’o clock. Once they reached the place, Shahjahan Sheikh and his men pounced on them and started to beat them black & blue. Their main target was Amay Bhuia who has been building a group of local Hindu youth to resist the attack of Shahjahan Sheikh. Amay Bhuia, somehow, managed t
Post a Comment
Read more 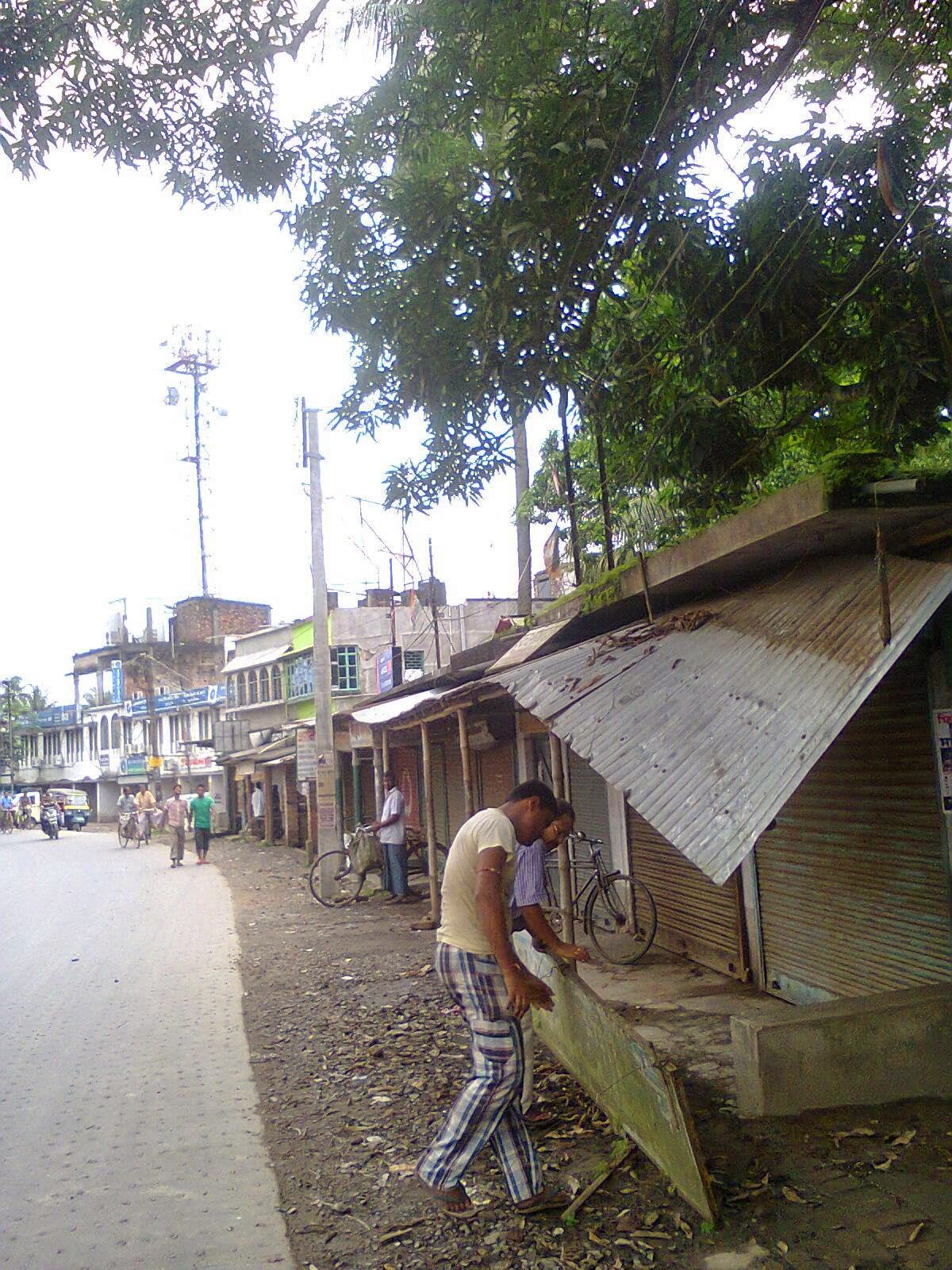 Katiahat village under Baduria police station in the sub-division of Basirhat is just like another village of West Bengal. Hindus have been organizing Durga Puja in Katiahat market for last 20 years. This year, one Muslim built his small gumti-shop on van at the designated place for Puja. Few days ago the market committee approached him and requested him to move his shop from that place as pandal was to be built at that place. On last Friday, that Muslim shop owner went to offer prayer at local masjid and came out with severe chest pain. He was admitted to hospital where he died on Saturday. Local Muslims smelt a conspiracy by Hindus in his death and attacked Katiahat market on Saturday. Shops owned by Hindus were looted and ransacked. Finally, police, along with RAF were deployed to bring the situation under control. The market is still closed.   Hapless Hindus at Katiahat failed to build pandal for the traditional Durga Puja. Moreover, their shops being looted
1 comment
Read more 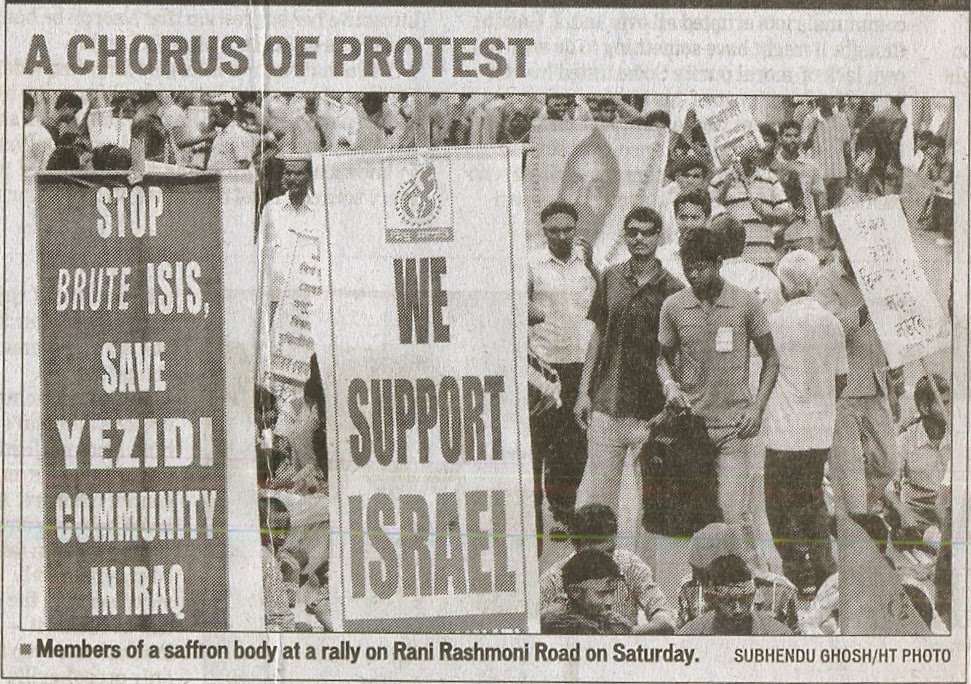 The event organized by Hindu Samhati at Kolkata on 16 th August, 2014 to observe the ‘Great Calcutta Killing” of 1946 and celebrate the birth centenary of Gopal Chandra Mukhopadhyay,   who, along with his team, built a formidable resistance against the Islamic atrocities and ensured the safety of Hindus in the turbulence days of 1946-47, has created huge uproar in the media both across and abroad the country.  Sri Tapan Ghosh , President, Hindu Samhati, while speaking at the rally, categorically supported the fight of Israel against Hamas. He justified the action of Israel as their fight for existence. The city of Kolkata, which has been the hub for Muslim appeasement politics, has witnessed several anti-Israel rallies in the last few days. This time, it was other way round. International Media Links -  http://www.timesofisrael.com/20000-march-in-kolkata-in-show-of-support-for-israel/ http://www.i24news.tv/en/mobile#content/40592 http://www.directmatin.fr/monde/
3 comments
Read more 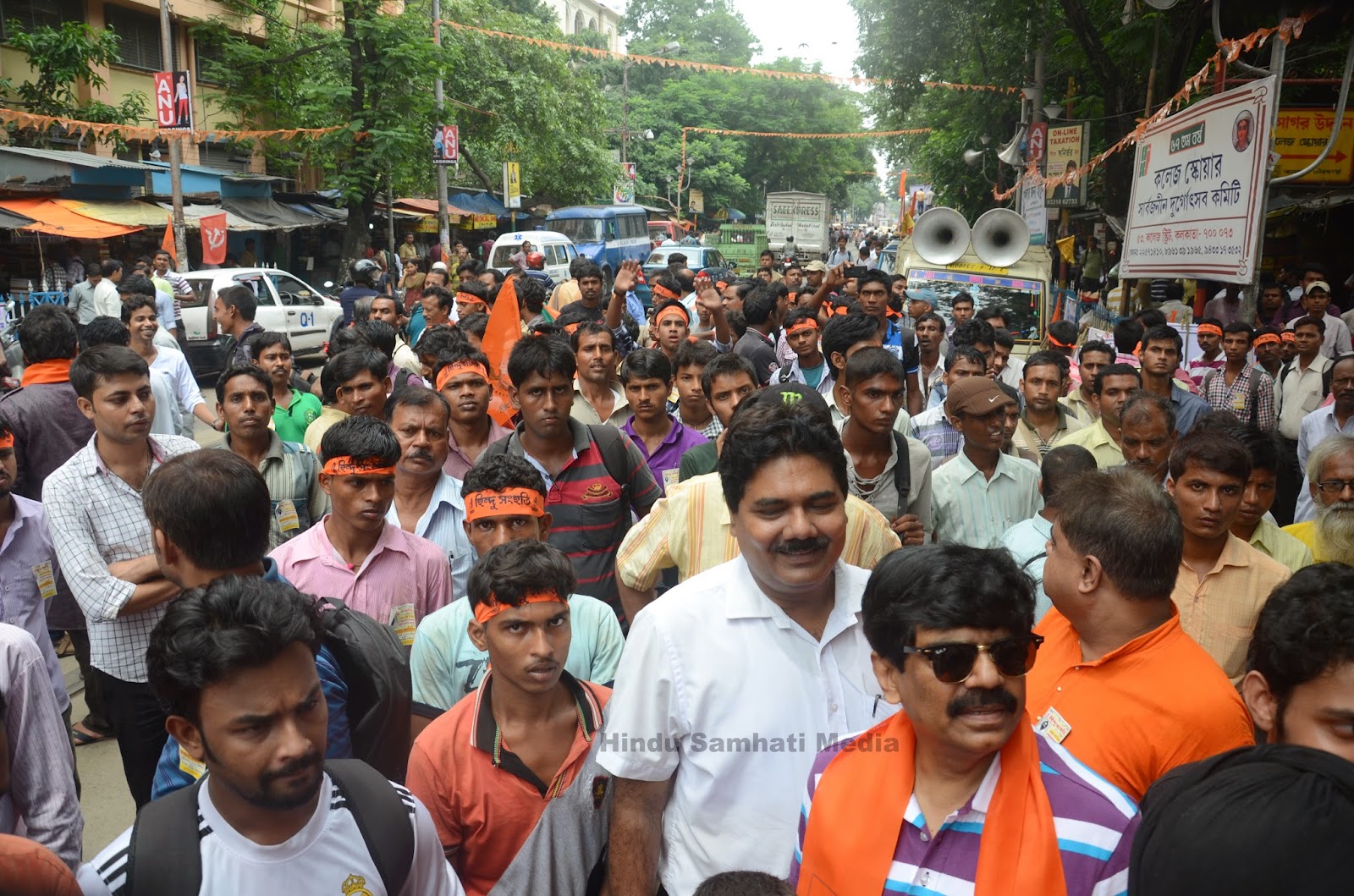 A few glimpses of Hindu Samhati rally organized on 16th August, 2014 to observe the "Great Calcutta Killing" in 1946 and commemorate the Birth Centenary of saviour of Hindus, Gopal Chandra Mukhopadhyay, in turbulent days of 1946-47. The rally was led by Hindu Samhati President Sri Tapan Ghosh along with Sardar Tajinderpal Singh Bagga, President of Bhagat Singh Kranti Sena, Delhi. Other dignitaries who were present in the rally were renowned social activist Sri Asitava Bhowmik, Sri Shantanu Mukhopadhyay, grandson of Gopal Mukhopadhyay. The rally started from College Square at 1 PM and after covering different streets of Kolkata, reached Rani Rasmoni Road (Esplanade) where participants were addressed by Sri Ghosh and Sardar Bagga. People from different parts of West Bengal joined the rally. The significant participation of women became a hallmark of the rally.  Sardar Bagga, in his speech, said he was fortunate enough to come to the land of Netaji, Shyamapr
Post a Comment
Read more

Message from the Hindu Samhati President

August 15, 2014
Friends, again Kolkata Police came under pressure of anti-hindu lobby and started from this evening nasty effort to disrupt our grand rally scheduled tomorrow to observe the birth centenary of savior of Kolkata in 1946, Gopal Chandra Mukhopadhyay. Just a while ago, at 9 PM, a phone call came to me from Kolkata Police DC Head Quarter office. The staff tried to convey me that the permission for our program tomorrow has been withheld. I politely told him that at this moment we are left no option to cancel the event by anyway, because hundreds of our supporters from North Bengal either already arrived or in train and the dignitaries from Delhi and other parts of country have already reached Kolkata. More importantly, we can’t communicate with our supporters all over West Bengal at this last moment. Every time we, being a non political Hindu organization, have to face this music of minority appeasing political establishment and spineless police administration. We are now accust
Post a Comment
Read more 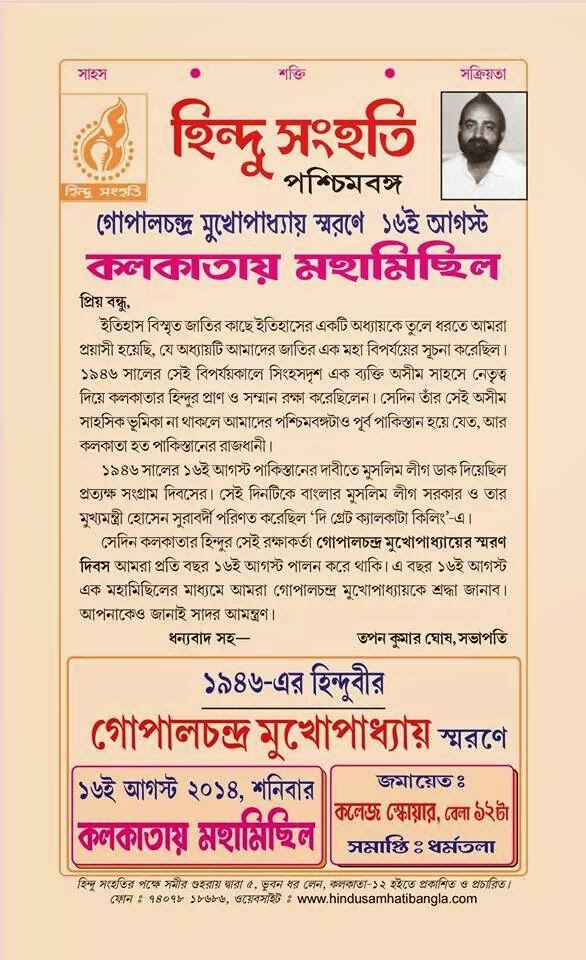 On 16th August 2014, the city of Kolkata is all set to witness the biggest ever rally of Hindus against ever increasing jihadi threat when activists of Hindu Samhati, led by the founder & President Sri Tapan Ghosh, will march through different roads of Kolkata to commemorate the anniversary  infamous ‘Great Calcutta Killings’ in 1946. This year also hold a special importance as this is happened to be the birth centenary year of Gopal Mukhopadhyay who, along with his team, built a formidable resistance against the Islamic atrocities and ensured the safety of Hindus in the turbulence days of 1946-47. The rally will also have the gracious presence of Sri Tajinder Pal Singh Bagga, President of Bhagat Singh Kranti Sena (Delhi), renowned social activist Sri Asitava Bhowmik, Sri Shantanu Mukhopadhyay, grandson of Late Gopal Mukhopadhyay and many other dignitaries from different spheres of society. The rally shall start at 12’o clock from College Square. We request you to join
Post a Comment
Read more

Nearing the Day of Grand Rally in memory of Gopal Ch Mukherjee, the Hero who saved Calcutta in 1946 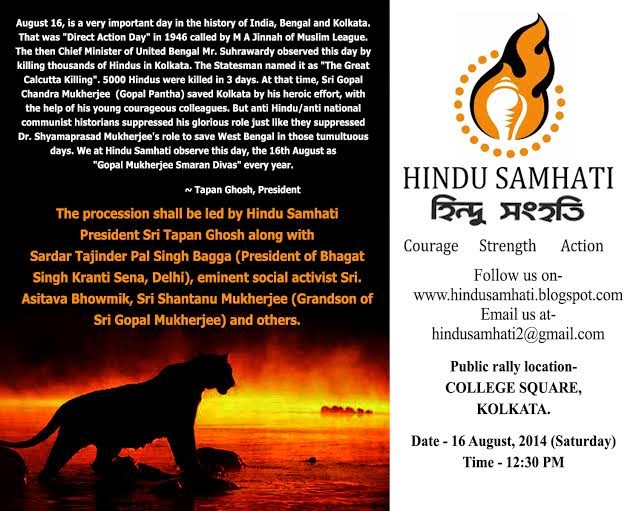 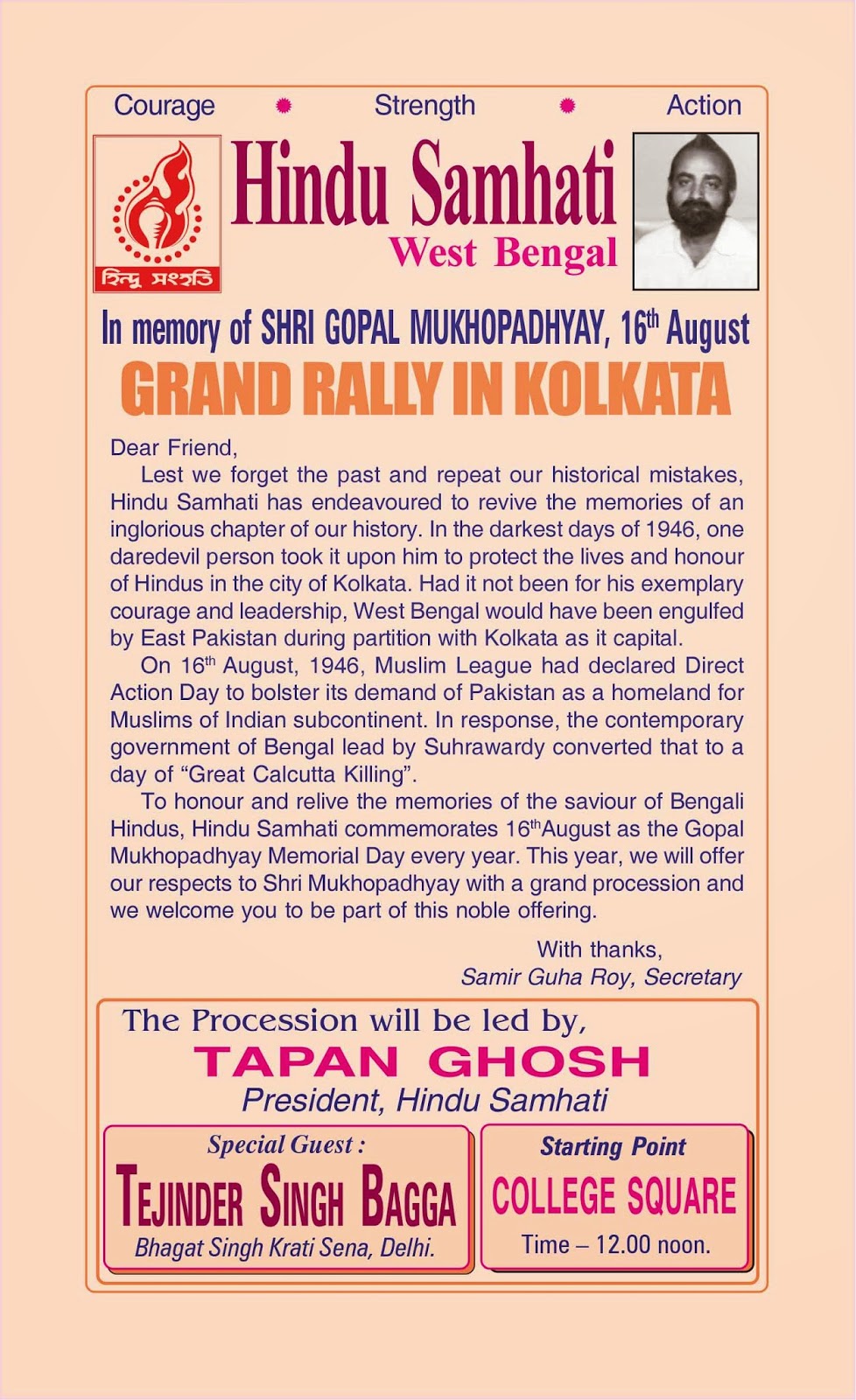 You are welcome join the rally and be a part of this historic event.
Post a Comment
Read more 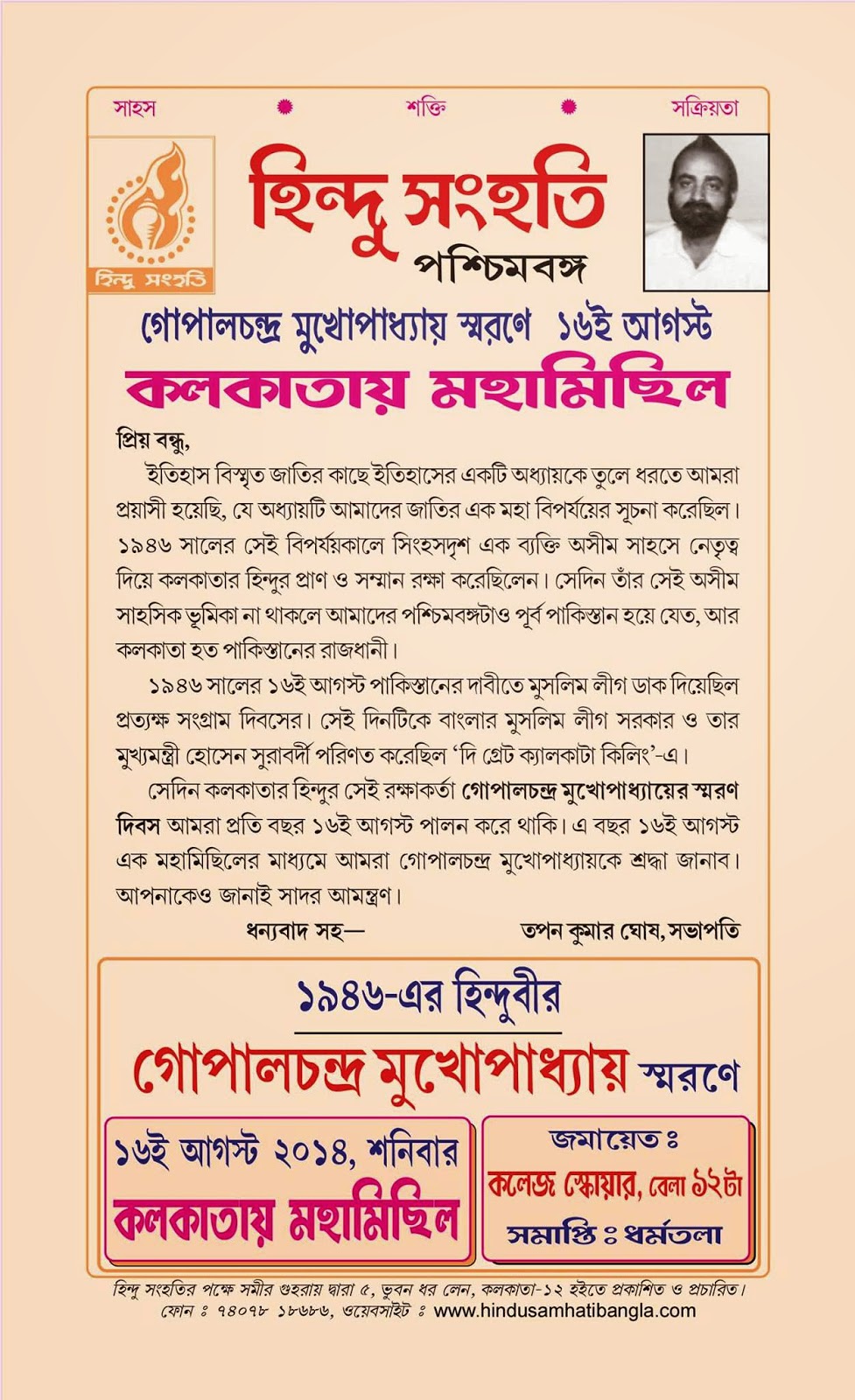 Dear Friend, Lest we forget the past and repeat our historical mistakes, Hindu Samhati has endeavoured to revive the memories of an inglorious chapter of our history. In the darkest days of 1946, one daredevil person took it upon him to protect the lives and honour of Hindus in the city of Kolkata. Had it not been for his exemplary courage and leadership, West Bengal would have been engulfed by East Pakistan during partition with Kolkata as it capital. On 16 th  August, 1946, Muslim League had declared Direct Action Day to bolster its demand of Pakistan as a homeland for Muslims of Indian subcontinent. In response, the contemporary government of Bengal lead by Suhrawardy converted that to a day of “Great Calcutta Killing”. To honour and relive the memories of the saviour of Bengali Hindus, Hindu Samhati commemorates 16 th  August as the Gopal Mukhopadhyay Memorial Day every year. This year, we will offer our respects to Shri Mukhopadhyay with a grand procession and we
Post a Comment
Read more 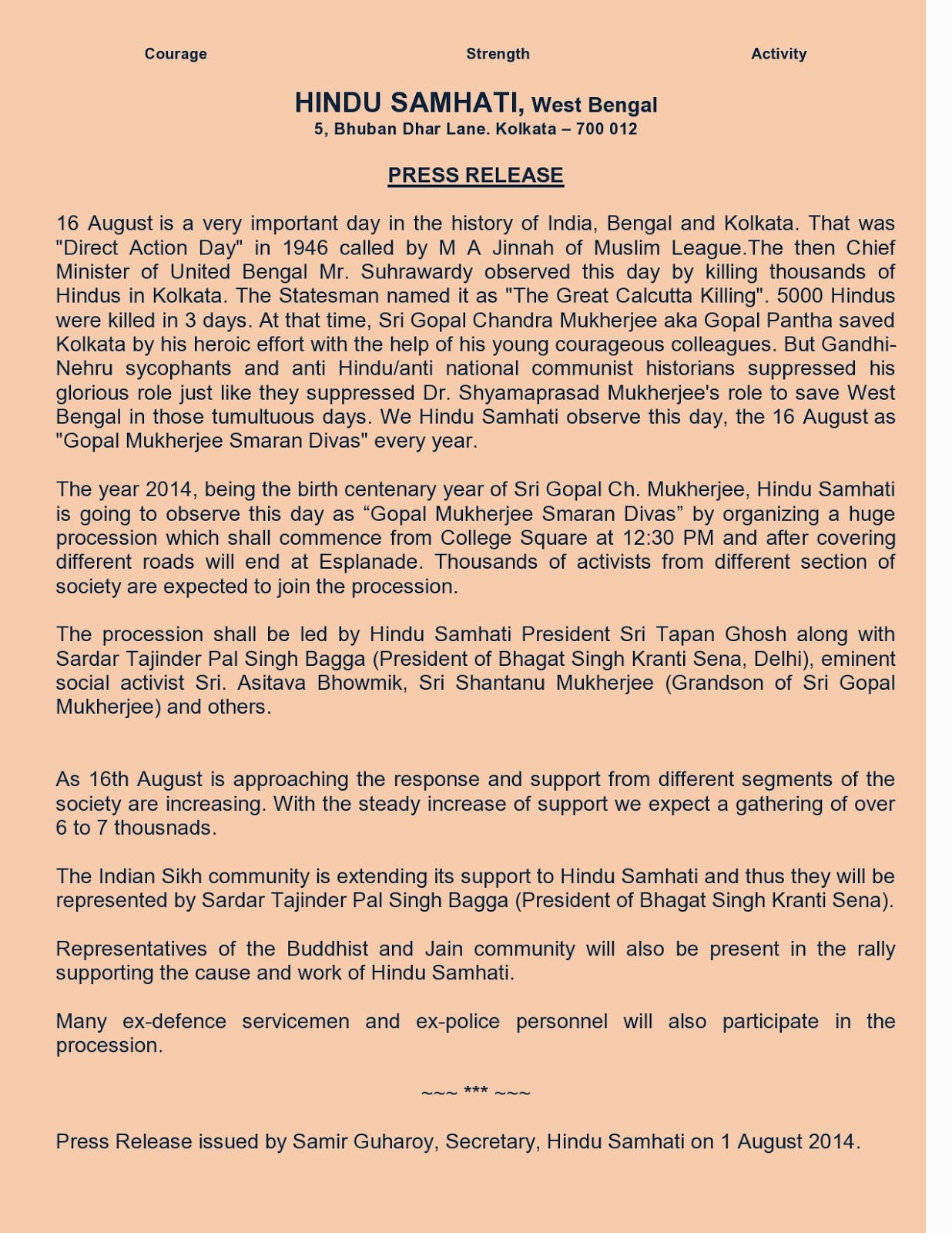 16 August is a very important day in the history of India, Bengal and Kolkata. That was "Direct Action Day" in 1946 called by M A Jinnah of Muslim League.The then Chief Minister of United Bengal Mr. Suhrawardy observed this day by killing thousands of Hindus in Kolkata. The Statesman named it as "The Great Calcutta Killing". 5000 Hindus were killed in 3 days. At that time, Sri Gopal Chandra Mukherjee aka Gopal Pantha saved Kolkata by his heroic effort with the help of his young courageous colleagues. But Gandhi-Nehru sycophants and anti Hindu/anti national communist historians suppressed his glorious role just like they suppressed Dr. Shyamaprasad Mukherjee's role to save West Bengal in those tumultuous days. We Hindu Samhati observe this day, the 16 August as "Gopal Mukherjee Smaran Divas" every year.  The year 2014, being the birth centenary year of Sri Gopal Ch. Mukherjee, Hindu Samhati is going to observe this day as “Gopal Mukherjee Sma
Post a Comment
Read more
More posts