Showing posts from November, 2013
Show all

Hindu Shrine attacked in Gagrabari, S 24 Parganas; police arrests the victim along with the aggressors

November 30, 2013
If you thought Tarapith was the only place which came under jihadi attack today, think again. Be it popular Hindu religious places like Tarapith in the district of Birbhum or the remote village of Gagrabari under Kanthalberia panchayat in South 24 Parganas district, Hindus are often at the receiving end Relentless attacks in West Bengal. There used to be a Hindu temple consecrated to Sheetala Mata deity in Gagrabari village of Basanti police station. As the property of the temple was being encroached upon by local Muslims, apprehensive Hindus put a fence around the area. On 27th November, a Muslim named Hamid Poddar trespassed into the area of the temple and started making haystacks along with his sons and other members of his community.  Hindus vehemently opposed their actions and asked them to leave the premises at once but Hamid Poddar and his sons Monirul Sardar and Nazir Sardar not only refused to leave quietly but attacked the Hindu protesters accompanied by Nabir Ali Sarda
Post a Comment
Read more

Tarapith – no more in safe custody

November 30, 2013
As per reports to the news desk of Hindu Samhati, serious clashes broke out between Hindus and Muslims at Tarapith in Birbhum, renowned Hindu pilgrimage across the globe, on 27 th November. Reportedly, the scuffle initiated once a few Muslim youths living in neighboring Fulir Gaon tried to disrupt the traditional Kartick Puja held behind the Tarapith temple at this time every year.   To stave off any further deterioration, organizers of the Puja along with others built up a firm resistance. However, it turned to be abortive ultimately as the Muslim youths retreated to their own village of Fakirpara but they came back soon and with more street fighters. The hotspot calmed down due to the efforts of local police and to prevent any such development again, a large contingent of police personnel was deployed.  Mutual distrust and simmering tension prevail the environs.   Hindu Samhati regularly monitors and reports violations against Hindus in West Bengal. We also work with both gov
1 comment
Read more

Communal hostility over fishery in Sandeshkhali, woman assaulted but saved by heroic efforts of husband

November 30, 2013
Achintya Bhowmik and his wife Sujata Bhowmik own a fishery conjointly in the village of Bermojur Hatkhola under the jurisdiction of Sandeshkhali police station in the district of South 24 Paraganas and the couple is known as amiable in the environs. However, both their amiability and economic strength became eyesore to a few local gangsters and with the end to seize the entire property from the couple, the same felons attacked the fishery at 2 am on November 5, 2013. It has been learnt, culprits including Hasanur Ghazi (son of Kousar Ghazi), Motalef Ghazi (son of Jubbar Ghazi), Rezaul Ghazai (son of Rezzaq Ghazi), Habibullla Sheikh (son of Kasem Sheikh), Salauddin Ghazi (son of Yakub Ghazi living in Bermojur Madrasapur) entered the tract silently first and asked Achintya to come out from the makeshift room used by the couple to guard the piscary.  Terming them as petty businessman, Sujata asked them to collect fish and go away. But Hasanur was not in a mood to be cowed and hence, he
Post a Comment
Read more

November 19, 2013
www.americanthinker.com  ========================= Bangladesh is on the road to becoming another Afghanistan, fulfilling the clearly stated desires of jihadists and fundamentalists, according to Bangladeshis who have fled the ir homeland. ------------------------------------------------- Imams describe women as filth and demand that they cover themselves. They accuse exploited female garment workers of prostitution when they are forced to work late into the night to earn a living. Schoolchildren have to dress in Islamic garb, even if they are not Muslims. Workers are discriminated against if they are other than Muslim. Land grabs by Muslims of property owned by minorities occur all the time -- with impunity. Atheist bloggers are beaten and even killed for "insulting Islam," and all this under the supposedly secular Awami League administration. The Hindu empire once stretched from Afghanistan to Indonesia, before the Muslim invasions whittled it down. According to
2 comments
Read more

Nisha Hari goes missing with Mohammed Imran without knowledge of her parents in Hatiara, Kolkata

November 13, 2013
Nisha Hari is 16 years’ old daughter of Jitendra Hari and a student of Ananda Sundari Vidyalaya at Deshbandhunagar in Baguiati. She is a resident of Dakshin Math Subhaspalli in Hatiara under the jurisdiction of New Town police station in North 24 Parganas and is known as a modest girl in the vicinity. She went to the school on 8 th   October and had not returned to her home. The worried family was aghast over the absence of their daughter but left no stone unturned searching for her in all directions but no success has been attained. It has been learnt after lots of inquiries that Nisha has purportedly eloped with Mohammed Imran who is middle-aged and also the father of two children. Imran is the son of Mohammed Islam and living in Hatiara Ghuni and is a cab driver by profession. Local people consider Imran to be highly proficient in enticing girls and exploiting them thereafter. It appears that Nisha is his latest victim.  Albeit Nisha’s father went to the police station of Baguiati
Post a Comment
Read more

November 13, 2013
Kaberi Kundu, 16-year old student of Saratkumar High School and living in Ward number 11 of Dokantala Shantipur under the jurisdiction of police station of Shantipur in the district of Nadia went missing on 24 th October and she has not returned to her residence yet. It has come to knowledge, Kaberi went to private tuition at 7 am on the same day and was kidnapped midway by Shoaib Ali. Shoaib is of 30 years old; he is the son of late Shamser Ali and lives in Ward number 12 within Durgatala Shantipur under the jurisdiction of same police station. Kaberi’s father and relatives lodged a general diary number 1293 on 24 th October but searching for her went on for the next three days. Once complicity of Shoaib Ali in the case was confirmed, the aghast family filed a First Information Report against him in the Shantipur police station on October 27 – First Information Report number 646/13 dated 27.10.2013. Kaberi’s father received phone calls on both 28 th and 29 th October from a pers
Post a Comment
Read more 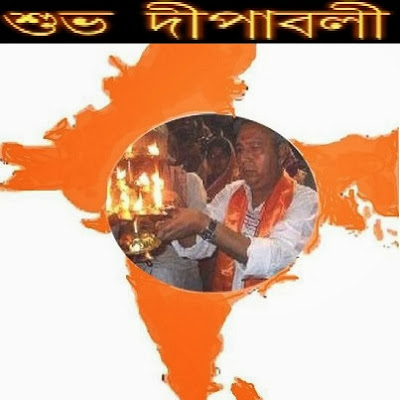 "Every Hindu Must Take an Oath on This Sacred Occasion to Fight Against The Asuras (Jehadi Demons) of Today." ..   Tapan Ghosh ... , President of Hindu Samhati       --FULL MESSAGE BELOW-- SHUBHA DEEPAWALI !!! On the auspicious occasion of Deepawali, celebrating the home coming of Sri Ram and the slaying of the demon Narakasura by Sri Krishna, I convey my best wishes to all on behalf of Hindu Samhati. On this hallowed occasion marking the TRIUMPH of Sacred over Evil, I have but one Prayer. I pray that all Hindus whose forefathers have been driven out of their homes by the Islamic aggressors from Afghanistan to Bangladesh, Kashmir to Assam or from any other part of Akhand Bharat, observe this day by taking a vow. Let us solemnly resolve that one day they will return to their ancestral home after defeating the Jihadi Ravanas of Kali Yuga - just like Sri Ram eliminated Ravan of Treta Yug and just like Sri Krishna eliminated the demon Narakasura of Dwapar Y
1 comment
Read more
More posts