Showing posts from November, 2014
Show all 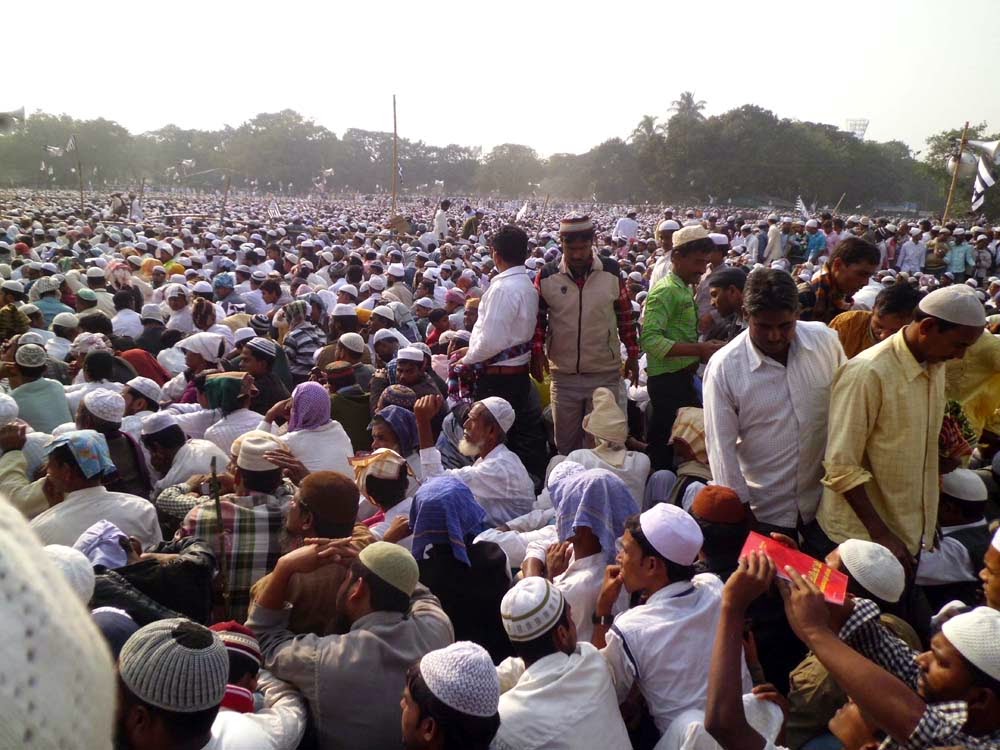 It was supposed to be a peaceful protest by Jamiat Ulama-e-hind. According to their posters and the speeches made by them previously, their main three agendas were - 1. Securing the bright future of Madrasas. 2. The way Holy Quran & Hadis has been maligned, (we don’t know who did that & where)      to protest against that. 3. National integrity & unity (They did not mention which nation!!). Just read their posters and hear what they say. One need not to be a Political master mind to see through their game plan& real agenda. The only thing these so called “Peaceful” “Secular” Protestor’s were interested in was showing of their strength, man power, political domination & monetary capacity. And they were ‘successful’! Although it is hard to a get an unbiased account of attendant’s; it is no less than 50,000. Maulana Siidiqulla said that “India is our country. This is our birth place. We will not let it become a Hindu country”. But in Sahid Minar Ground it w
1 comment
Read more 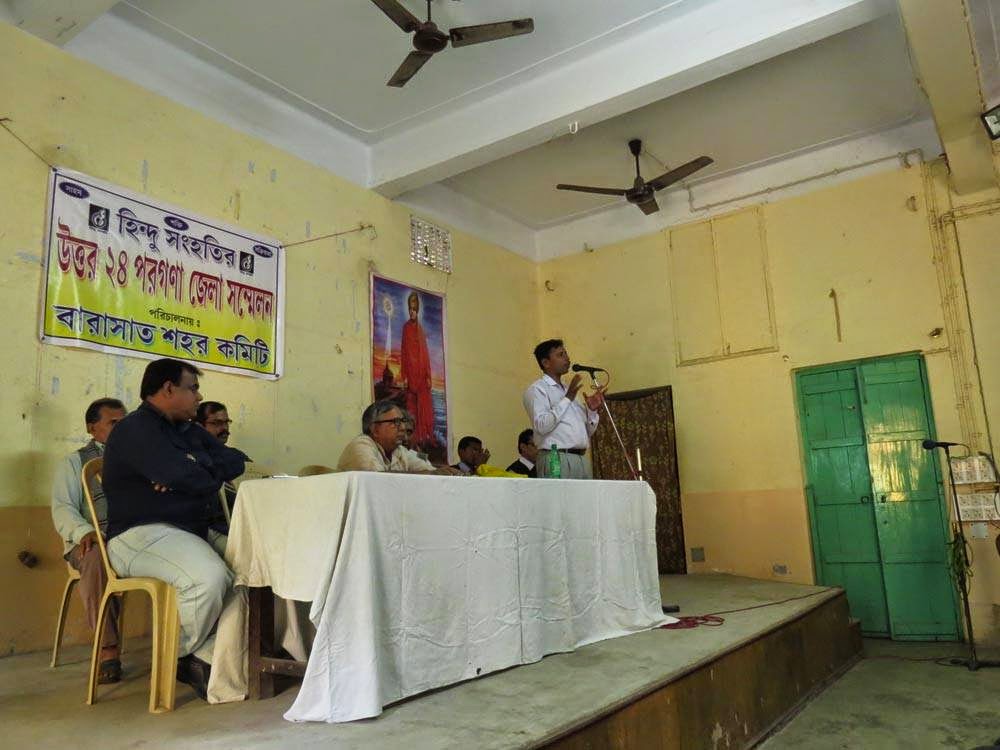 District Conference of Hindu Samhati's North 24 Parganas unit held at Subhas Institute, Barasat on 26th November, Hindu samhati President Sri Tapan Ghosh attended the conference.  Adv. Sri Brojen Roy, Sri Narayan Chandra Ghosh, Sri Chanchal Debnath, Sri Santa Prasad Goldar, Sri  Avijit Mishra and Sri Devdutta Majee were among the other  dignitaries . The woman in the picture is Smt. Tapati Das/Mukherji from Malatipur under Basirhat PS, extremely tortured by the local Muslim thugs. Her husband is missing. She narrated her painful story. Hearing her story you will be compelled to think that situation of the Hindus of the villages of Basirhat is no better than of Bangladesh. Sri Ghosh said that Hindu Samhati shall intervene and will try to help her.
Post a Comment
Read more 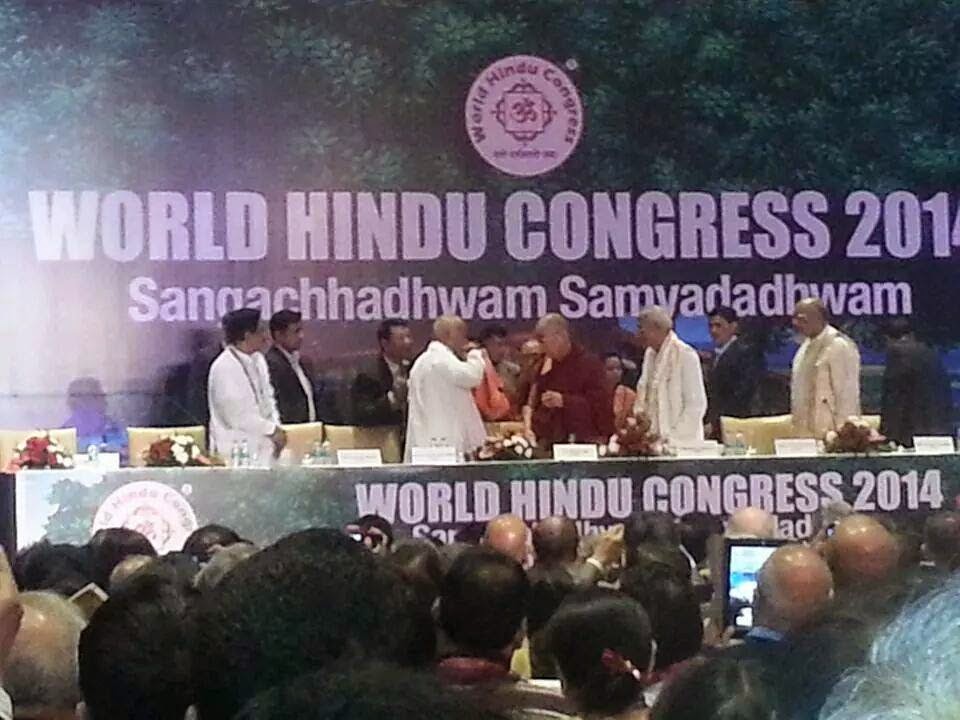 Hindu Samhati President, Sri Tapan Ghosh  reached Delhi on 20th November to attend World Hindu Congress which held on 21,22,23 November  at Ashok Hotel   . VHP of America nominated him as part of their delegation team for this Conference.  1800 delegates from 50 countries attending this great convention. His Holiness Dalai Lama inaugurated the Congress. He, Shri Ashok Singhal, Shri Mohanrao Bhagwat and C.V. Wigneswaram, Chief Minister of Northern Province of Sri Lanka delivered speech. Book "Prabodhan" edited by Prof. Saradindu Mukherji was released by HH Dalai Lama.  In those three days, Sri Ghosh met many of his friends and former colleagues. Dr. Koenraad Elst and Francis Gotier among them. He also met with his friends from Bangladesh, USA and other countries. He Met many Bengalis from many places. Sri Tapan Ghosh was happened to be the only Bengali speaking  delegate from West Bengal.
1 comment
Read more

Save Hindu Land In Bengal : Become A Member Of Hindu Samhati 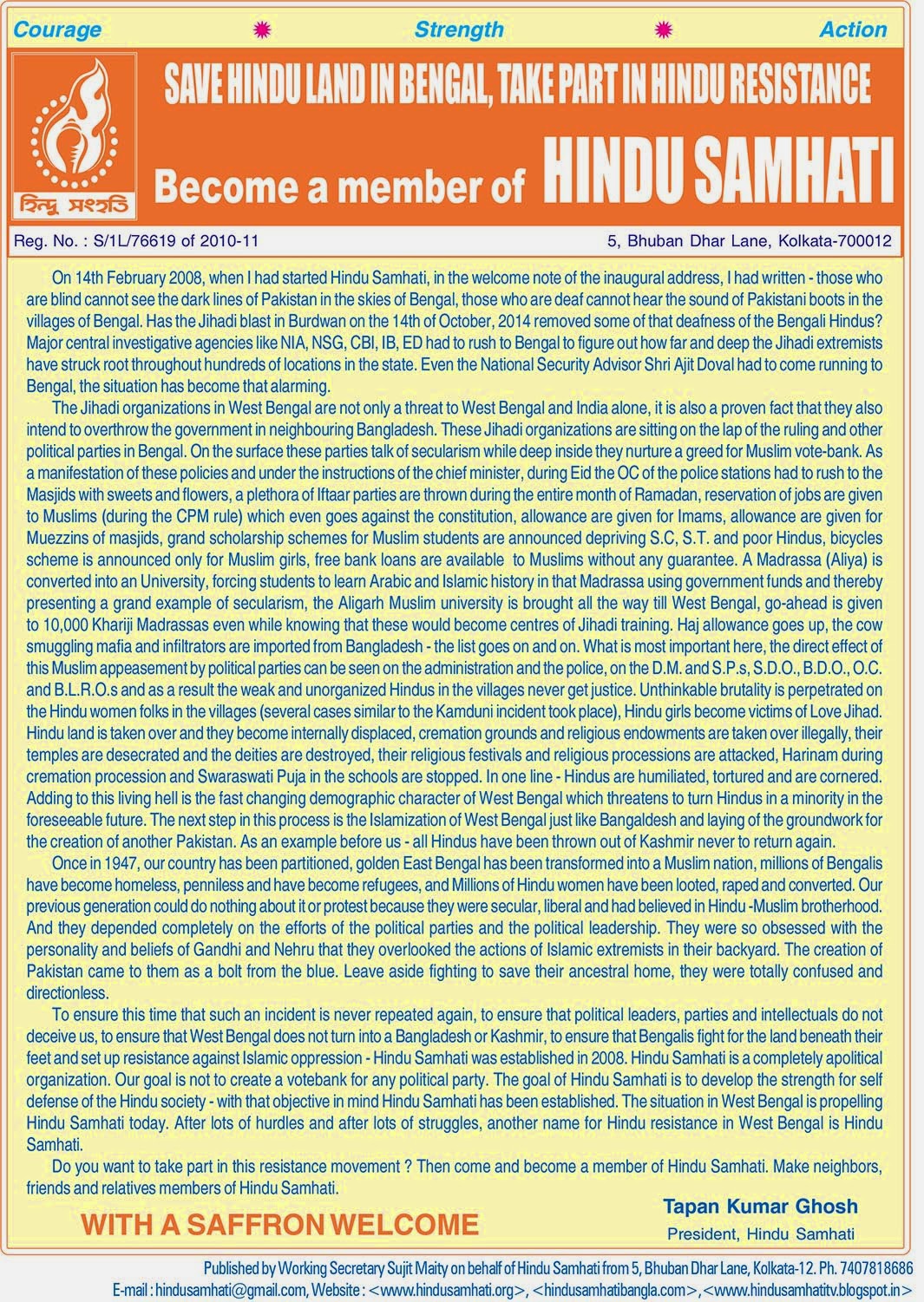 SERIOUS CONSPIRACY IS BEING HATCHED IN MALDA : Tapan Ghosh

November 19, 2014
Malda police (PS - Englishbazar) arrested our Hindu Samhati worker Dipankar Rajak  yesterday evening.Today he has been produced in Malda court with several non-bailable serious charges. Bail not granted, and he has been sent to Police custody for 5 days by judge.  Case no - 936/14. dt. 29/10.14. U/S 302/364/201/36 IPC. Reportedly Dipankar has been implicated in the serious communal riot in Kaliachak-Baishnabnagar-Malda in the last week of October.   http://indianexpress.com/ article/india/india-others/ curfew-in-parts-of-malda-as- murders-trigger-communal- tension/  Dipankar's house at Satangapara (under Baishnabnagar PS) is 20 kms away from the place Khasimari where 3 Muslims have been killed allegedly by the Gowalas of the area. Muslim - Gowala bloody conflict in this area has a long history.  http://soumyadesarkar. blogspot.in/2010/12/three- persons-killed-in-kaliachak. html I highly suspect that a heinous conspiracy is being hatched either by North Bengal Police or
Post a Comment
Read more

November 15, 2014
http://indianexpress.com/article/india/india-others/even-after-deaths-26-more-tubectomies-were-done-in-one-hour-at-another-camp/ One of my facebook friends Kaushal Dalmia is insisting me to promote Modiji's Swachh Bharat Mission on my FB page. I responded him as below : Surely you can take this Swachh Bharat Abhiyan as your mission. That is praiseworthy. That does not mean that everyone should take that work as their mission. AT THIS MOMENT, I wish to travel to the villages of Chhattisgarh and tell the tribal villagers that a deep conspiracy is going on by all political parties including BJP (not Modi)  to reduce the veer ST population to make Hindus weak and minority. And this conspiracy is funded by Arab money thru ISI. And many ministers, MLAs, MPs and leaders of BJP fell into this trap knowingly or unknowingly. My heart goes with the hapless innocent simple tribals of Chhattisgarh and Jharkhand. BUT, since I've already made my priority to work for the Hindu Defence in
Post a Comment
Read more 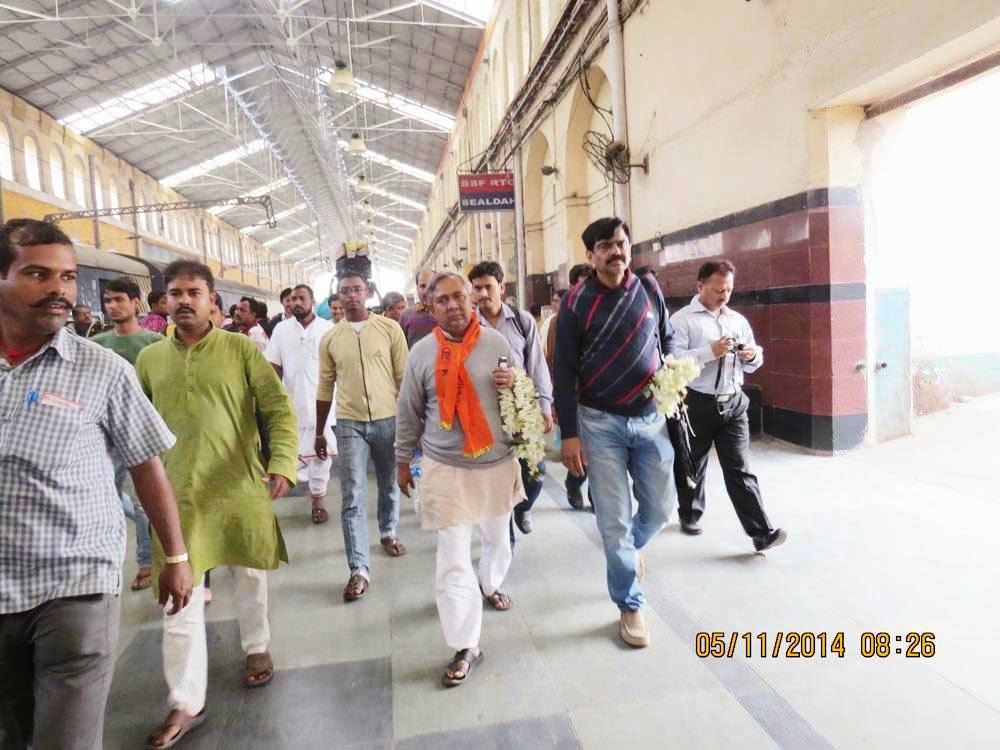 On 3 rd   November, Shri Tapan Kumar Ghosh, President of Hindu Samhati, was arrested from a private household while attending a personal meeting in Chanchal area of Malda district along with his two aides, Sri Asitava Bhowmik & Sri Sujit Maity. He was visiting the area to address organizational matters as planned sometime back. Sri Ghosh was detained overnight in Chanchal police station before being released the next morning. He was escorted by six vans of state police personnel and his supporters were stopped midway from meeting him. The entire process was shrouded in secrecy and the detainees were not even provided with basic amenities like food or water for the entire day. It became apparent that the destination was not Malda as the convoy changed route towards Siliguri. While Mr Ghosh was initially informed that he will be handed over to the Siliguri Commissionerate, the commissioner of police in Siliguri, Mr Jag Mohan denied having received any such information when
Post a Comment
Read more
More posts