Showing posts from September, 2013
Show all

September 30, 2013
Basanti in South 24 Paraganas district is seething with communal tensions and apprehension that violent altercations may take place between Hindus and Muslims is getting higher. To get the reality it is crucial to delve into a few pertinent facts. Sometime back, local Hindus wanted to construct a permanent structure to the Harisabha temple in Basanti market and had started to raise the requisite funds to cover the cost of construction. Even if lion’s share is being managed by Nemai Saha, president of Harisabha Temple Committee, there is the need of more. The Temple Committee, hence, decided to lease a portion of its property worth 2 bighas located few yards away from the temple. The Committee members also decided to lease a bank of the pond within the land and as per the Committee’s resolution, 12 shops of Hindus only would take place in the bank. The construction of 12 shops is going to end soon. On the opposite side of the pond, especially beside the PWD or Basanti to Bharatgarh ma
Post a Comment
Read more

September 24, 2013
Sexual abuse and assault of women has become a regular affair in the Indian state of West Bengal. While people’s anguishes against the government for not doing enough to protect women are rising steadily, the government prefers to retain a strange silence. The actions of the government as well as ground reports suggests that in a majority of cases, the attackers belong to Muslim community whereas the victims are Hindus, leading to deepening resentment among the victims who allege that government inaction is only to secure minority votes. One of many such victims is 16 year old Sujata Mal, daughter of Biswanath Mal, resident of Maheshpur village in Jangipara police station, Radhanagar panchayet under Hoogly district. Sujata was a bright student of Dw arhatta Rajeswari Girls '  High School  in Class IX. Both her parents were manual labourers and in spite of impoverished conditions, they struggled hard to provide her daughter with the best quality education they could afford. But wh
Post a Comment
Read more

September 24, 2013
Bithi (name changed) is 23 year old wife of Purna Ghosh (name changed) and resident of Dhapdhapi village under Baruipur police station in 24 Parganas (South)) district. On 1 st   August she was raped and murdered by a gang of criminals while returning with her girl child Mrittika (name changed) to her residence at   8 pm . During the incident, three of the criminals encircled her all of a sudden and grabbed both mother and daughter in a flash. They were then taken to Dakshin (South) Barasat area where Bithi was raped while an assailant named Salauddin poured acid on her face.   Later on, the same culprit Salauddin took Bithi to Baruipur Sub-divisional Hospital and phoned Tarak, brother of Bithi who lives in Dakshin (South) Durgapur and informed him of the development. Hearing the news Tarak along with other family members rushed to the hospital to find Bithi lying dead in a pool of blood. When questioned by police, Tarak confirmed that Salauddin was the main conspirator behind the ev
Post a Comment
Read more 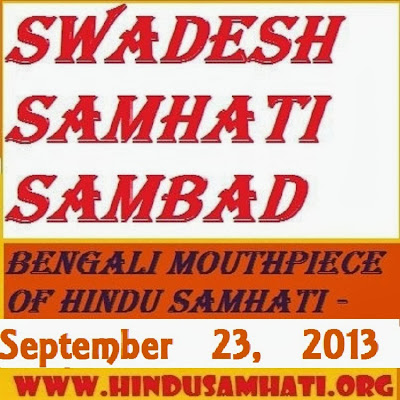 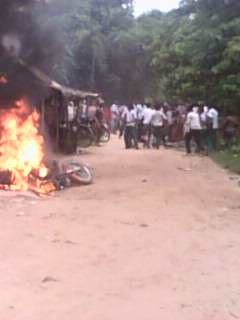 Bedrabad Baisnabnagar High School is located under the jurisdiction of Kaliachak police station in Malda district of West Bengal. On 9 th   September a group of students attacked its headmaster Mr Obaidur Rahman (age 50) for reportedly abusing and attempting to molest Ms Aparna Singha (age 35) who is also a teacher of the same school. The event started on 4 th September when Ms Singha was asked to visit the headmaster’s chamber. During the interaction, she alleged that Mr Rahman abused her verbally in sexually explicit languages and then attempted to molest her while she pleaded to be left alone. Although she could not leave initially, the headmaster relented eventually and allowed her to leave. After this, she rushed to the teacher’s room and informed her female colleagues of the torment. She was asked to remain silent for the time being.   But her colleagues’ best efforts to suppress the incident failed and reports of Aparna’s attempted molestation spread across the neighborhoo
Post a Comment
Read more

September 11, 2013
The jubilant march of activists and supporters of Trinamool Congress on August 25, 2013 after successfully forming the Panchayat board at Bhagabatipur under the jurisdiction of Chanditala police station in Hoogly district turned into havoc for villagers living in Kanaidanga. The village comprises a sizable number of Hindu Barga Kshatriya families who belong to the scheduled castes and are known to be CPM supporters in the neighborhood. It has been learnt that initially there was no plan to enter the village of Kanaidanga . The decision was taken later on by Haji Rabiul Mollah (Kanu) who is enjoying high status of a strongman in TMC these days. The march was being led by Mohan Bag and Srikanta Bag while Haji was in the forefront. Once the procession entered Kanaidanga, crackers were burst and it appeared as if the vitriolic participants were all set to carry on mayhem. Within a couple of minutes, the residence of Panchkari Bag was targeted and both his wife and niece were report
Post a Comment
Read more

September 10, 2013
Protesters thrashed mercilessly Kumargunj under the jurisdiction of P.S. Tamluk, Block: Tamluk, District: Midnapur (East) experienced a brawl between two religious communities leading to a violent clash around 5 pm on September 9, 2013. It has come to knowledge, the problem started when a few Muslim youths asked a Hindu trader of Kumarganj market to either close down or relocate his shop to somewhere else to make their own club there. Dipankar Das, owner of the shop and also a supporter of Trinamool Congress, denied the offer flatly ensuing a heated argument. Dipankar was also joined by a few people soon and he decided not to give up. Finding it hard to deal with Dipankar, Muslim youths went back to their area only to return with more rowdies. While the fracas was in full swing, someone struck Dipakar with a rod. He fell on the ground and fled. But others supporting him then were not spared. They were beaten black and blue with all kinds of blunt instruments. Four in the crow
Post a Comment
Read more
September 03, 2013
Villages in Sandeshkhali PS under communal attack;  united resistance by victims prompts police action In the morning of 31st August, a mob consisting of Muslim miscreants attacked and destroyed several shops and severely beaten the shop owners in Sarberia area of Sandeshkhali police station in North 24 Parganas district. Mr Bhombol Pramanik and his son Bapi Pramanik from Charabidya village were severely injured in these attacks. When police failed to control the situation, RAF has been deployed. But RAF too were attacked by the Muslims. 4 RAF personnel were injured and one police vehicle was fully damaged. Over a thousand strong mob roamed the adjoining areas of Sarberia, Rajbari and Agarati while communally provocative announcements blared loudly from the loudspeaker’s Rajbari Purbapara mosque.  Those on the receiving end of the attack felt terrorized in a manner reminiscent of attacks in Deganga where properties belonging to the Hindus were attacked and looted by Muslims
Post a Comment
Read more
More posts