Showing posts from May, 2010
Show all

May 16, 2010
From 14th April Communal Riot started in Panchthupi village and surrounding area of the village under Burwan Police Station of Kandi sub division of Murshidabad district. This Panchthupi village is a very big village consisting of 18 paras (localities). The clash started when some Muslim boys spat on the Hindu devotees of Shiva on the day of Charak Puja. These devotees were drinking water from a tube well. The devotees protested resulting in clashes between two groups. Some people from both sides were injured. The administration intervened. With the initiative of the Officer in Charge of Barwan P.S. and District Magistrate a Peace Committee was formed taking representatives from both communities. But, on 16th April, suddenly about 300 – 400 Muslims attacked the Hindus. Many Hindu houses and shops were looted and destroyed. Hindu houses were bomb charged indiscriminately. Naru Gopal Mukherjee’s house in Achoa Para and one ex elected Pradhan of Dakshin Para were damaged i
Post a Comment
Read more 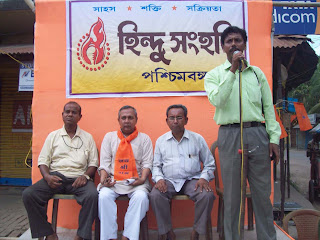 Hindu Samhati Holds Protest March at Haringhata Police Station Deputation to Police to Protect Hindus from Islamist Extremists PROTEST AGAINST THE ATTACK ON HARINGHATA HINDU FESTIVAL BY MUSLIM MISCREANTS A peaceful protest march organized by Hindu Samhati, at the Haringhata Police Station in Nadia district, passed off peacefully on May 5, 2010. Tensions had been simmering in this area over repeated assaults by Muslim miscreants on Hindus attending the Pagol Thakurer Mela , a local Hindu festival. The procession of approximately 500 people walked 7 km. on a hot day, from Paglatala to Haringhata Police Station. The procession started at 1.30 pm and reached the venue at 3 pm, where it culminated into a protest meeting. Speakers were Tapan Ghosh, Advocate B.N. Roy, Advocate Tushar Kanti Tikader, Susen Biswas and Brahmacharini Smriti Devi. Strong slogans were raised from the procession and the meeting against the Muslim culprits and against police inaction. Thereafter a delegation
2 comments
Read more 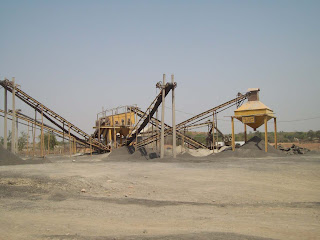 Empty Stone Crusher Abandoned Quarry Tribal women returning to village Tribal leader Rabin Soren (center) They are the sons of the soil in this Birbhum district of West Bengal. They are Hindu tribal people. They have lived in this region since time immemorial. They used to live here in peace with the forest as their neighbour. They are not ambitious. They are not greedy. Their need is meager. They are hardworking. Their only assets are the neighbouring forests and their hard labour. Here the land is rocky and the yield is very little. And they were satisfied with it. They owned this rocky land. This rocky land turned a curse for them. Of course 2 additional factors contributed in this curse: (1) their innocence and (2) growing demand of stone and stone chips for our urban civilization. Especially the roads and real estate industry. So the greedy men came from the cities and towns and converted the rocks and the land into quarries. They set up Stone Crushers for making stone chip
1 comment
Read more
More posts