Showing posts from August, 2012
Show all

Hindus in Moulopota, Deganga persecuted at every moment 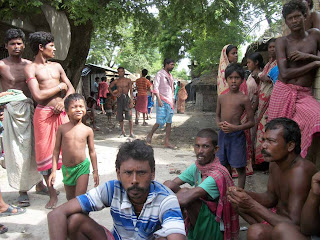 Hindu Samhati fighting lone battle to save Hindus desperately With each day it passes the condition of Hindus in village: Moulopota, P.S. Deganga, District: 24 Paraganas (North) is worsening and surely, had not Hindu Samhati been there by now Hindus there would have been turned into serfs of Islamists, assaulters on Hindus but enjoying edges due to whole-souled backing of police and political spectrum.   Hindus in Moulopota are defiant and are ready to struggle come what may. Hindu Samhati happens to be the strongest mainstay of theirs but there is the need of more Hindus to join and make the struggle victorious.  To Know More Please Read: http://deganga2010.blogspot.in/2012/08/hindus-in-moulopota-deganga-being.html
Post a Comment
Read more

August 31, 2012
The political class has let down India By Gautam Sen Is the future of the Indian Republic in doubt? Surveying published opinion and gauging political postures, one gets ambiguous answers. Many retired senior administrative, intelligence and defence officials write dispiritingly of India's immediate prospects, which should cause worry. It also points to their lack of confidence in the political masters they once served.  The political masters can be divided into three categories and views that can be reasonably imputed to them judged accordingly. The first is the overwhelming swathe of political representatives who currently dominate political life in States and, increasingly, the Centre. The second are a smaller group of influential senior political leaders, chairing parliamentary committees, etc., and have an impact on party stances. The final and most significant are the politicians who are senior ministers, led by the prime minister, a coterie privy to state secre
Post a Comment
Read more

Hindus in Assam have to wage relentless struggles for survival

August 30, 2012
End of constitutionalism invokes bloody conflict Can the ongoing conflicts between Hindus (not Bodos only) and Islamists in Assam , hailing from Bangladesh , end anyhow? This is the burning question of the day with no solution close at hand. Both governments at Assam and Delhi are in a fix and the sole reason being – obstinacy of Islamists to shelve their nefarious designs in Assam and (more striking) defiance of Hindus (led by Bodos) in this regard. Islamists thought, this time too, citing their predominance in the last seven centuries (acquired by brutality, deception and ingrained hatred against Hindus) in the Indian subcontinent, they would win the game of procuring vast parts of Assam in a jiffy. However, the violent defiance of Hindus – especially Bodos – has trounced the entire design. And what has come to the fore beyond doubt – thanks to inhuman negligence of both State and Central Governments (successively) as regards volatile situations in Assam (despite ship
Post a Comment
Read more

August 30, 2012
S.K. Sinha Sparks from Assam started dangerous fires in Mumbai and some other places last week. Mercifully, these did not last long. But they have the potential to start a gigantic fire engulfing the entire nation. This is a chilling reminder of the Partition holocaust, one of the greatest human tragedies in history. Muhammed Ali Jinnah announced that his party would observe August 16, 1946, as Direct Action Day. He declared, “Today we bid good-bye to constitutional methods. Today we have forged a pistol and are in a position to use it. We mean every word of it.” Bengal was the only province in the country where the Muslim League was in power. Direct Action was launched in Calcutta . Suhrawardy, the Muslim League chief minister, released his goons, as per plan. There was a massacre of non-Muslims on the first two days. It was surprising that the British governor did not exercise his special powers to dismiss the Muslim League ministry and impose Governor’s Rule. He re
Post a Comment
Read more

August 29, 2012
Hindus must come forward to save Matribhumi How will India’s relation with Bangladesh fare in the coming days? The issue is of exceeding great importance since the possible change of guard in that country will (definitely) affect Indian political scenario majorly. As reports are coming in, support for the reigning government under Sheikh Hasina is dwindling fast there and if it remains unhindered, Begum Khaleda Zia, known highly for her (also of her supporting parties) anti-India diatribes fro decades, will replace the existing Prime Minister, adding salt to the gaping wound of India. If India is to be saved, Hindus have to come forward in strength. India belongs to Hindus, their Sanatana Dharma from time immemorial. That’s why, Hindus must be inculcated the true Kshatriya spirit to save the motherland.  Gone are the days when Hindus in India used to enjoy complete security under a civil administration – they have got to fight now to retain the same. To Know More Pleas
Post a Comment
Read more

Hospital for Muslims only in Bengal!

August 28, 2012
Islamic appeasement creates new record What a shame!! What couldn’t be envisaged by the greatest sycophant of Islamists till the other day back is going to happen now – a saga never heard in post-1947 India to date but hell-bent to unleash its hellacious influence on posterity. Trinamool Congress-led Bengal Government, under the aegis of its supremo Mamata (known more as Mamtaj Bano or Begum these days for her desperate efforts to institute a weird breed of communal harmony under an Islamic hijab), reigning Chief Minister, is desperate to set up an exceptional medical college and also super specialty hospital for treating people of minority community (none save Islamists) in the state. It has been learnt that the requisite land, worth 22 acres, has already been purchased –located at Bhangar, District: 24 Paraganas (South). To Know More Please Read: http://southbengalherald.blogspot.in/2012/08/hospital-for-muslims-only-in-bengal.html
1 comment
Read more

State of Bengal desires to make Hospital for Minorities

August 28, 2012
Controversies rising ugly heads about reservation in treatment Bengal government is all set to develop an especial medical college and also super specialty hospital for the treatment of people belonging to the minority community in the state. Land has also been bought at Bhangar, District: 24 Paraganas (South), to make this a reality. However, controversies regarding whether it is possible to dedicate a medical institution to any particular religious community have started to grow up.   Beds in hospital will be reserved based on religious identity – even if Medical Council of India (MCI) have started to raise objections in this context, Bengal government remains firm over its decision. To have permission from the Planning Commission regarding the very proposal, Minorities Development and Finance Corporation of State Government has already sought the DPR (Detailed Project Report) from the Public works Department.       Medical Council of India has already stated in cle
Post a Comment
Read more 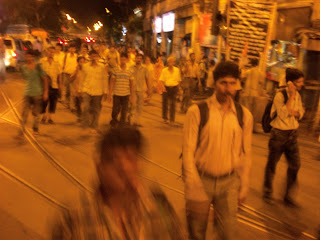 Islamists enjoying free rein to destabilize anything Today Kolkata perceived another development, getting increasingly common in this metropolis these days. It’s the fiery protest of Islamists at Rajabzar, known both as a well-known and infamous Muslim ghetto, located in North-Central Kolkata, boasting of the presence of 11 wondrous mosques in its vicinity in unison. Islamists were witnessed to organize a brawny, flaming road blockade to voice their protests against current killing of Muslims in both Myanmar and Assam.   Thanks to the sudden blockade, traffic situation in central Kolkata, mainly Sealdah, College Street along with Mahatma Gandhi Road and surroundings went out of gear. Police was found to watch the vitriolic posture of the demonstrators helplessly; their sole duty being safeguarding all protesters and if necessary, sacrificing themselves while pacifying the malefactors having potency to get berserk at any time. The worst prey of Islamic seculars were pede
Post a Comment
Read more
More posts