Resolve to be valorous as Gopal Pantha (Mukherjee)

Hindu Samhati, in accordance with decisions taken in its monthly meeting on July 8, 2012, is all set to organize “Gopal Mukherjee Day” on August 16, 2012 , the first such event in the post-1947 period in Bengal, and all these are being done to inculcate the lost Kshatriya spirit in Hindus and also to make people, nonplussed thanks to recurrent onslaughts of pseudo-seculars and Marxists, comprehend the brutal reality prevailing the Direct Action Day, Kolkata – 1946.

Gopal Mukherjee (best known as Gopal Pantha) remained the greatest obstacle before murderous Islamic population and henchmen of Jinnah and his cohorts in their struggle to have Kolkata and keep it under yoke of Islamic rule.

The colossal struggle of Gopal and Hindu youths, inspired by his desperate struggle, turned the wheel of fortune to the other side and hence, Kolkata (2 nd largest city after London in then British Empire) was won by Hindus (after a vigorous battle) inflicting a great defeat on Islamists.

It’s, therefore, the time to remember such a valiant warrior once more especially when Hindus’ days in contemporary Bengal are numbered due to mounting Islamic fundamentalism.

At times stacks of articles on the same subject do appear and people get bored stiff as usual; even if the aim of all these is to make people more conscious. Lots of articles on Direct Action Day,Calcutta, 16 th August 1946, have been published already but the majority of these, if not more, speaks of the same theory. It is to make an appraisal of then administration, role of Hindu and Muslim leadership, what went wrong on the whole and also to malign the Hindus, termed by Marxists as the real troublemakers.

Thanks to all these, people accountable for calling Muslim League’s heinous conspiracy to destroy Hindus en bloc a halt were never heeded. They have become unsung heroes of Indian history, especially at its juncture and owing to despondencies of Bengali Hindus, they do not come out in any tête-à-tête too. This gloom must be ended and it can be done through paying homage to Gopal Pantha alias Gopal Mukherjee, savior of Hindus and also one of the most valiant Bengali Hindus in those days.

Here is a short bio of Gopal Pantha, called mostly as a notorious goon of North Calcutta and leader of a strong army of 800 young men, 33 years old during the said Calcutta carnage. He was born to a Hindu family of butchers, well-known in the vicinity for running a prosperous slaughter-house of goats. Gopal was also conducting the same business during the juncture of the Indian subcontinent. Now one may enquire meaning of the word “Pantha”. In colloquial Bengali language it is meant for a goat. But the sense of responsibility made him switch his target from goats to Islamic crooks roaming in the streets of Calcutta at random.

What happened on Direct Action Day, Calcutta, 16 th August 1946, was no less than any shock to him. Even if Hindus were apprehending something bad, the mammoth meeting, projected as peaceful and amiable in the preceding days, under the aegis of Muslim League (party controlling Bengal Government then), turned out to be a gigantic assemblage of Muslim criminals having sole ambition to annihilate Hindus en masse. Pogrom (better than the word “riot’) started the instant meeting of Muslim League in the heartland of Calcutta ended. And it was nothing other than a bloodbath of Hindus. When the situation went out of control, thanks to Muslim League’s warlords and effete police and administration, Hindus and Sikhs started repelling.

The situation is best described in the chronicles of Gopal Pantha himself. He stated in BBC "50 years of India’s independence" without any qualms and with conviction, “ I heard that two goalas (milkmen) had been killed in Beliaghata and riots have started in Boubazar ...;it was a very critical time for the country; the country had to be saved. If we become a part of Pakistan, we will be oppressed so I called all my boys and said, this is the time we have to retaliate, and you have to answer brutality with brutality ... We were fighting those who attacked us ... We fought and killed them. So if we heard one murder has taken place, we committed ten more ... the ratio should be one to ten, that was the order to my boys.” It is worthwhile to mention that arms and ammunition were easily available in Calcutta, most prominent military bastion of Allied Forces in South East Asia, those days.

How courageous was Gopal? Two anecdotes are enough to depict it. One of these is related toaged Ghulam Rasool, top leader of the Muslim National Guard (terrorist Muslim organisation, connected to Jinnah's Muslim League and liable for most of the Hindu genocide in Bengal) inCalcutta. He, once during those tumultuous days, asked Gopal Pantha to put an end to all bloodshed. He stated with folded hands, “Bahuth khoon bahchuka...hamari tharaf se bhi aur aapki taraf se bhi. Ab is qatl-e-aam ko rokna hoga. Hum aur khoon kharabe ke liye taiyaar nahee hain. Hum ceasefire ke liye taiyaar hain." In short, Muslim strong-armers were overwhelmed by the virility of Hindus, especially Gopal, and were pleading for a ceasefire only.

Again, as per S. K. Bhattacharjee, a sub-inspector in the Lalbazar police headquarters, he was very ferocious. A time came when Mahtama Gandhi came to Calcutta and tried to convince Gopal along with other Hindu warriors to surrender their arms. But Gopal Pantha was a harder personality for Gandhiji even and remained defiant. In his own words, "I will not lay down even a nail if it has been used for defending Hindu honour."

Why aren't there Gopal Panthas these days? It can only be if Hindu youths conform to the policies of Gopal Pantha and get engaged with physical culture (Shakti Aradhana) instead of wasting time, energy and LIFE. 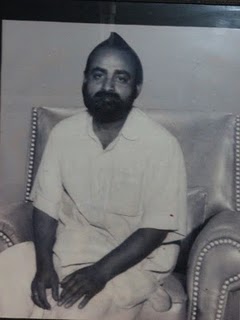 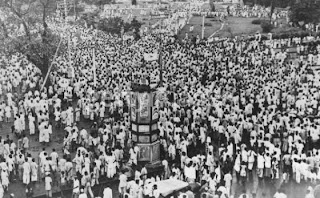 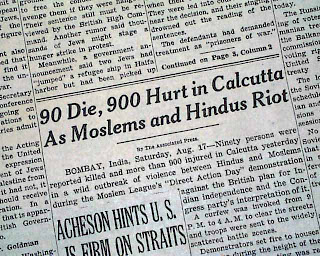