Showing posts from June, 2008
Show all

June 28, 2008
In a happy turn of events on the 27th of June, 2008, Sri Tapan Kumar Ghosh and others who were incarcerated in the Diamond Harbour Jail for the Gangasagar incident, were freed on bail. At the hearing at Kakdwip Court yesterday all the accused (falsely) persons for the Gangasagar incident of June 12th were freed on personal bail bonds of Rs.1000/- each. As expected, the West Bengal Police could not substantiate any of the 'heavy duty' charges they had levelled against Sri Tapan Kumar Ghosh and others; and were roundly reprimanded by the judge. The accused who were freed on bail are: Sri Tapan Kumar Ghosh Sri Sundar Gopal Das Sri Amal Bose Sri Prasenjit Sardar Sri Jagannath Ash Sri Pintu Das Sri Samir Mondal Sri Dulal Sardar Sri Kamal Sardar Sri Mukunda Kolay Sri Ram Naskar Sri Prasenjit Haoladar Sri Bappa Samanta Sri Swapan Mondal Sri Gaur Das
3 comments
Read more

June 27, 2008
Dear friends, The extreme privations of prison life notwithstanding, all the 15 workers of Hindu Samhati, who are with me in the Diamond Harbour Jail, are in high spirits. In the incident of the 12th June night 20 of our workers were injured, eight of them seriously. There was also a lady among those who were seriously injured. Both the police and the administration were complete failures in quelling the absolute rampage that went on at the Hindu Samhati campsite, from 7pm in the evening till 1 am at night. Not only that, the police team - many of whom were seriously injured - took shelter inside the camp to save their lives. If the brave young workers of HS had not fought the bloodthirsty Muslim mob back with a desperate courage, one shudders to think what would have happened. The 8 ladies participating in the camp would surely have been violated and then another Godhra would have been enacted in Gangasagar. What happened and what could have happened - this event can be viewed from nu
1 comment
Read more 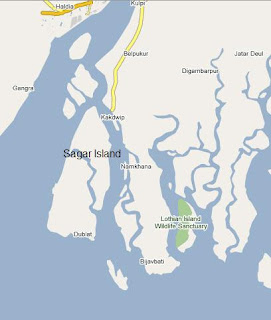 Sagar island at the Gangasagar – the confluence of the Ganga and the Bay of Bengal – is one of the holiest pilgrimages of India, where millions of Hindus from all over India and the world gather during the ‘Makar Sankranti’ (Winter Solstice) for the ‘punya snan’ or holy bath every year. As per the holy Hindu scriptures, this pilgrimage centre was established more than 2000 years ago by Maharishi Kapil (popularly known as Kapil Muni) the chief proponent of 'Samkhya Darshan' or the Samkhya school of thought within Hindu or Indian theology. This remote island gained popular notice in ancient India when Maharishi Kapil set up his ashram in this distant corner to keep away from the attendant distractions of city or village life and meditate upon the novel theories he was propounding. Hindu Samhati had planned a 3 day training camp and workshop upon the current socio-political scenario of Eastern India in the serene and peaceful ambience of this island. The camp was scheduled to
1 comment
Read more

June 13, 2008
FRIENDS OF HINDU SAMHATI Registered in: New York, USA. Contact: hindusamhati@gmail.com June 13, 2008 The Friends of Hindu Samhati, USA unequivocally condemns today's gruesome attack on the Hindu Samhati training camp at Ganga Sagar (West Bengal) by a murderous mob of local Muslims, at least 6000-7000 strong, starting Thursday (June 12, 2008). Ganga Sagar is a very reknowned Hindu Tirtha Kshetra (Place of Pilgrimage) where the sacred Ganga River has a confluence with the Bay of Bengal. Ganga Sagar is located on the western edge of the Sunderban Delta on Sagar Island. At the edge of Sagar town - adjacent to the beach - is the ancient temple dedicated to Kapil Muni, the sage responsible for initiating the chain of events that ultimately resulted in Mother Ganga descending to the earth from heaven and giving mankind an opportunity to wash away its sins in her pure water. The earliest mention of this sacred place is found in the Mahabharata where a learned sage explains to Bhishma t
5 comments
Read more
More posts