The exhibition has been put up in the fair ground of the annual gathering of the members of the Matua community who converge from all over India in festivities at Thakurnagar to honour the cherished memory of their Leader and Guru the great social reformer Sri Sri Harichand Thakur. The exhibition was inaugurated on 1st April 2008 by Shri Keshav Rao Dikshit senior Pracharak of the Rashtriya Swayamsevak Sangh. Shri Tathagata Roy – Member BJP National Executive, Shri Ratneshwar Sarkar – General Secretary, All India Refugee Front and Shri Tapan Kumar Ghosh – Convenor, Hindu Samhati and the chief organizer of the exhibition spoke on the occasion. Shri P.Veeru Chaudhary, national coordinator of FACT was also present on the occasion.

The exhibition 'pandal' was tastefully decorated with panels depicting graphically the atrocities committed on the Hindus/Buddhists and others by Islamic fundamentalists and terrorists in Bangladesh. With striking captions the selected photographs bring out the condition of extreme insecurity that Hindu women/children/places of worship etc suffer from in Bangladesh, especially after the radicalization of its polity. Over-fifty thousand people have visited the exhibition already, the members of the Matua community who gather for this annual fair could well-relate to the exhibition because they have themselves been victims of displacement and these very atrocities (especially in the massive Hindu exodus of the years 1947-48, 1951, 1964, 1971 and 1992 from the erstwhile East Pakistan and later Bangladesh, due to unspeakable Islamic atrocities). As a matter of fact, in the anti Hindu pogrom in Bangladesh in 2001 (upon which theme this exhibition is based), many of the victims were actually across-the-border relatives and extended family members of the Matua's of West Bengal.

The response has been overwhelming – in six days about 50000 viewers visited the exhibition, with hundreds seeking to establish contact with the organizers. A stall of Nationalist/Hindu literature has also been put up containing informative booklets on the condition of Hindus in WB/India, on the dubiousness of secularism, duplicity of intellectuals, betrayal of Hindus by politicians. Its to be noted that the district where the exhibition is being held is one of those heavily affected by Islamic infiltration from across the border.

The uniqueness of this show is that for the first time an exhibition of international standing, highlighting the plight of persecuted Hindus, has been successfully organised in a district of West Bengal and has received massive and unstinted support from the local people. It is a timely reminder to all those who have been afflicted with the complacent secular malady of co-existence, that when Islamic fundamentalists get in power, they ring the death-knell of that very co-existence, tolerance and harmony. A legendary western historian had commented on societies dying not so much by aggression but by suicide – Hindu Samhati's exhibition starkly raises this question before the Hindus of India in general and of West Bengal in particular – whether they would prefer looking away and thus follow the suicidal path to extermination or would they turn around, consolidate, resist and survive?

That the Hindu Samhati and its disciplined and committed volunteers have indefatigably and single-handedly worked towards organizing this exhibition, raising with great difficulty resources on their own, mobilizing people, laying the exhibition speaks volume of their single-minded dedication to the cause.

Since most of our 'secular' Hindu-baiting media is purposely ignoring the event and 'secular' minority-appeasing politicians are taking umbrage at it being organised successfully, this is an appeal to all like-minded individuals/organizations/groups to give wide publicity to the event & support the issue and the efforts of the Hindu Samhati. It is imperative that a consolidated action be initiated towards protecting the eastern region of Bharat from further disintegration/division and onslaught of 'islamofacsism'. Hindu Samhati's efforts in organising this exhibition is definitely a major step towards that consolidation.

Here are the pix of our Exhibition and the Matua festival: 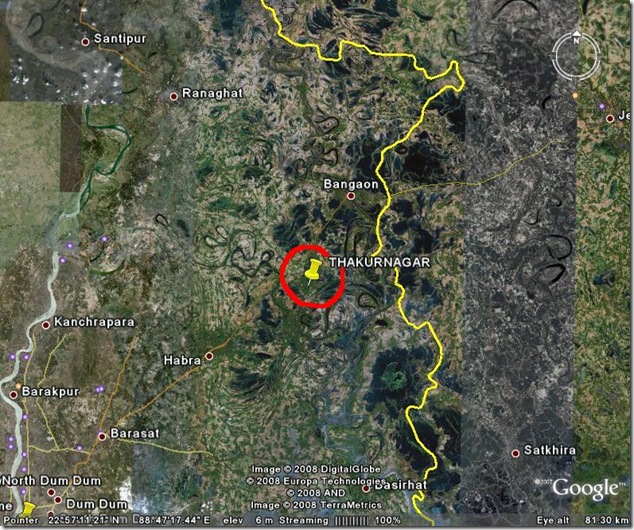 This is the location (follow the place mark within the red circle) and the yellow line to the right is the Bangladesh border. 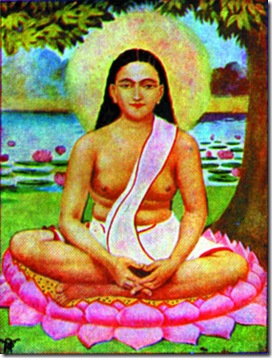 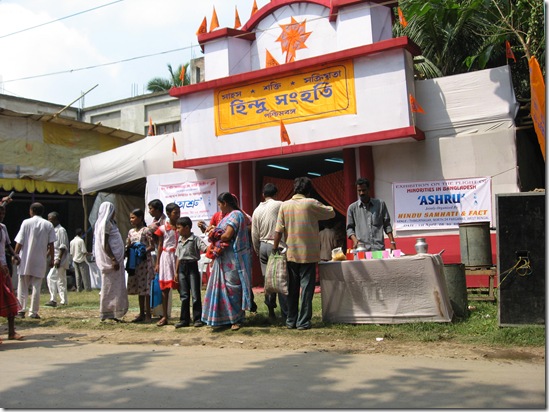 The Exhibition venue at Thakurnagar 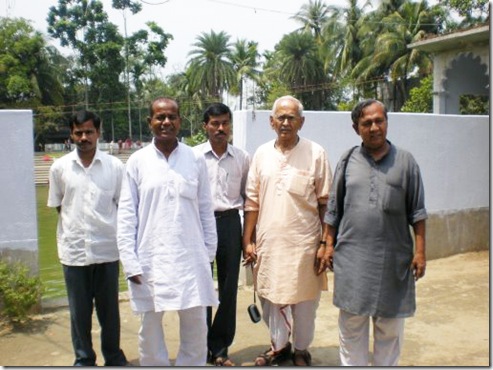 From right: Sri Tapan Kumar Ghosh, Sri Keshav Rao Dikshit and others before the venue. 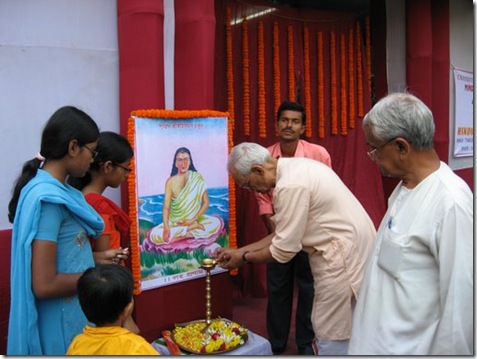 Sri Keshav Rao Dikshit inaugurating the exhibition by lighting the lamp before the picture of Sri Sri Harichand Thakur. 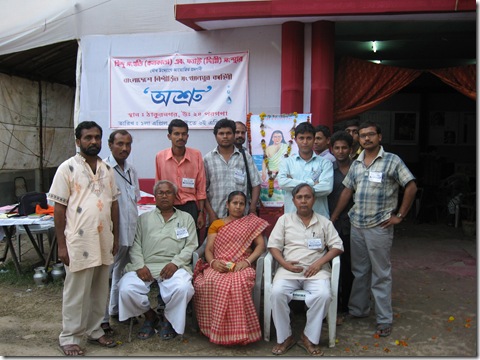 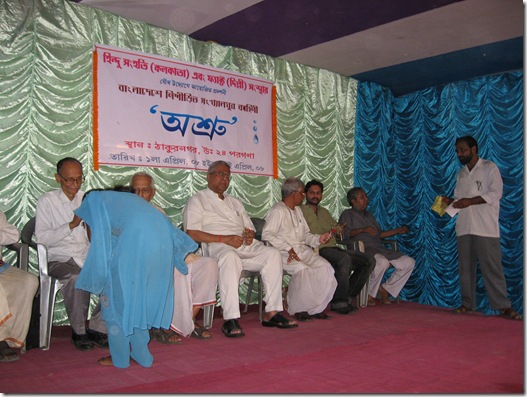 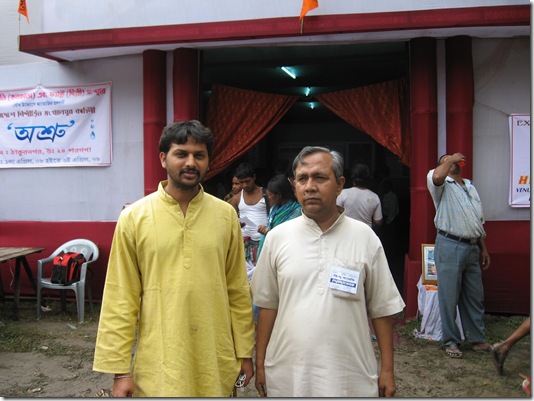 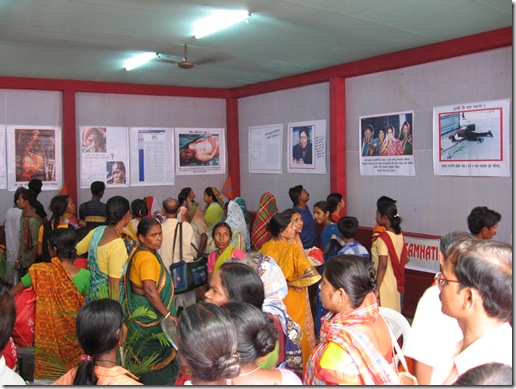 Crowds at the exhibiton 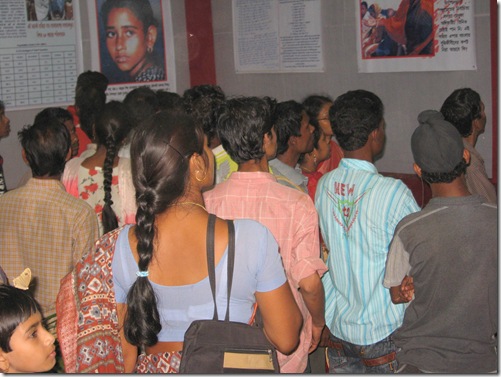 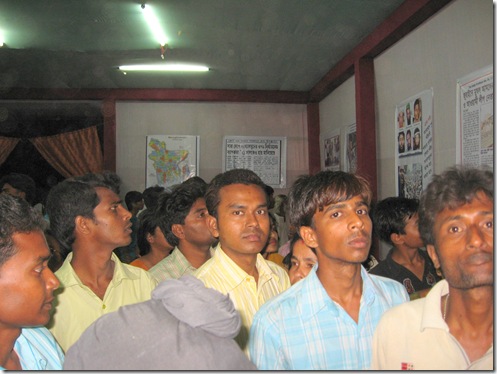 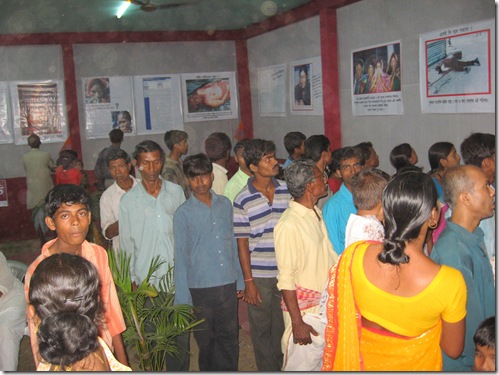 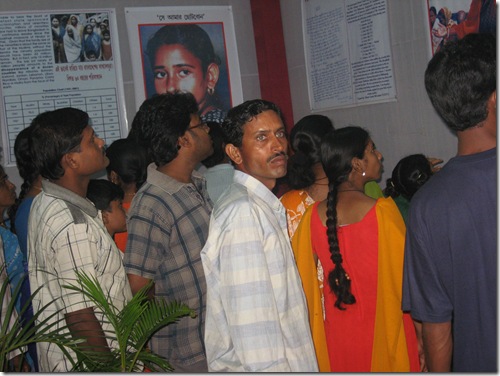 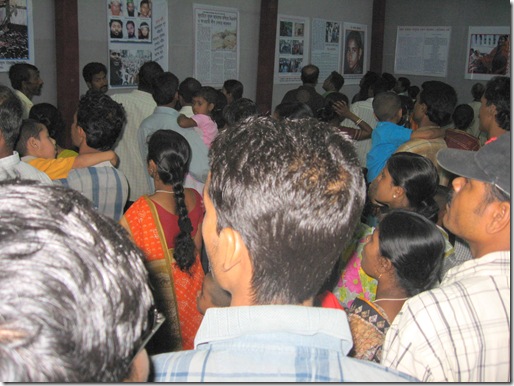 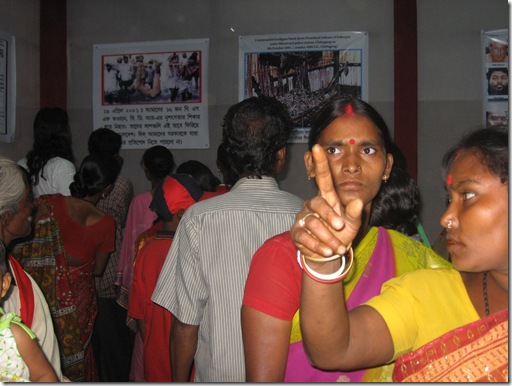 Does it rekindle some unpleasant memories? [About 90% of the Matua's in West Bengal are refugees from East Pakistan/Bangladesh, victims of successive waves of expulsion through the last six decades.] 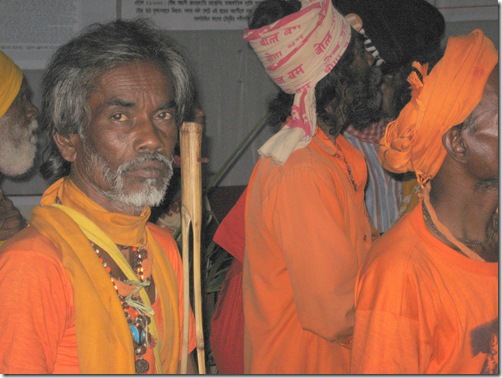 Local Sadhus at the Exhibition 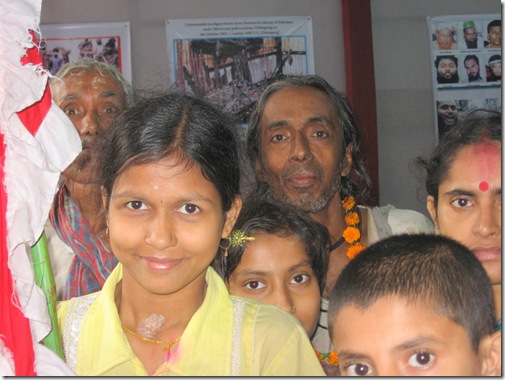 Young and old, at the exhibition. 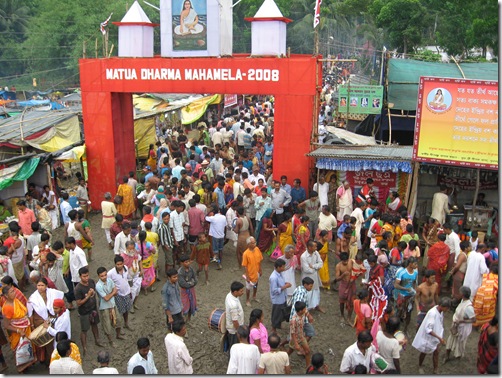 The main gateway to the festival grounds. 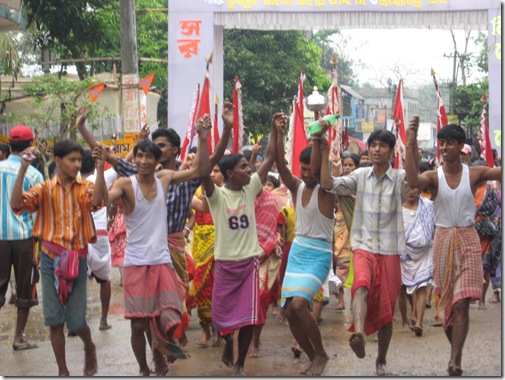 And they came on foot... 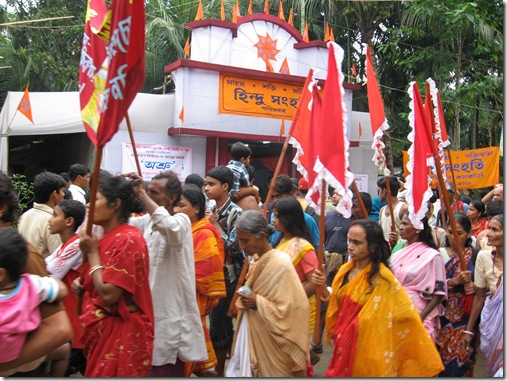 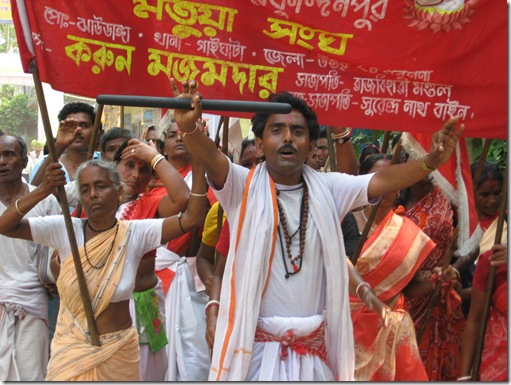 And praising 'HIS' name. 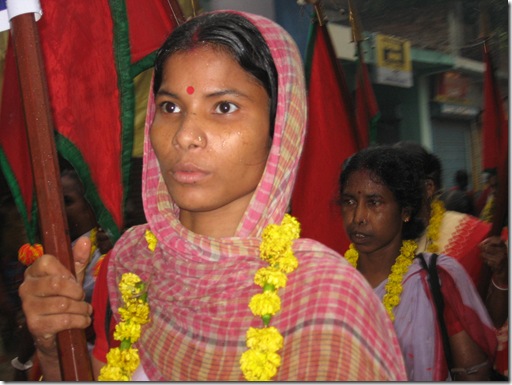 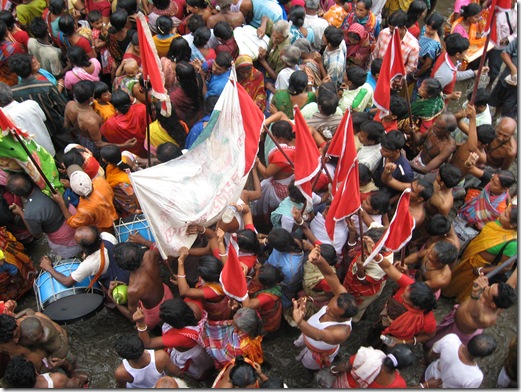 The multitude before the Temple. 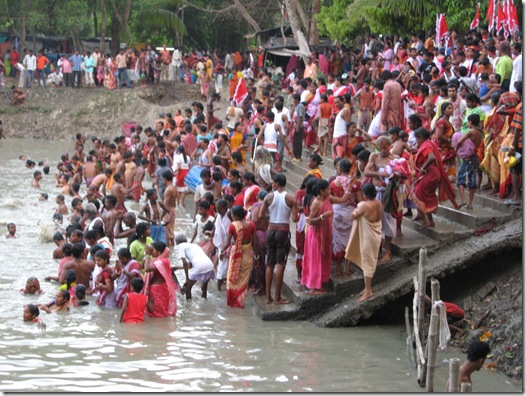 The Mahabaruni Snan (Holy bath) at the 'Kamna Sagar' lake. 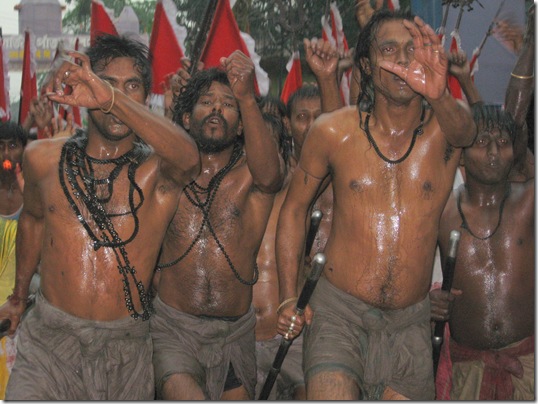 Pilgrims returning from the Holy bath. 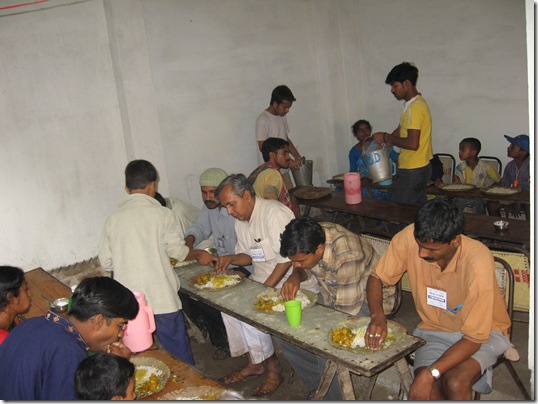 The 'Langar' or the communal dining place. 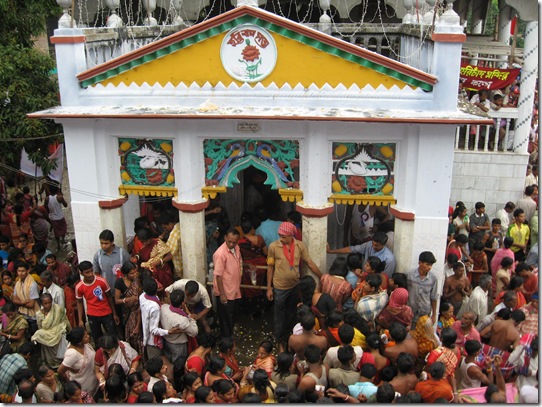 The main Temple at Thakurnagar.

Hindu Samhati and FACT (New Delhi) heartily thanks all their organisers, members, volunteers and the local people and pilgrims at Thakurnagar, whose ceaseless efforts and enthusiastic participation made this exhibition a resounding success. We also extend our heartiest regards to the online community of our readers - may you receive as much satisfaction in viewing this exhibition report as we got in organising it.

If you want to view the full photo gallery of the festival and exhibition, click the link below:

http://debashishbramha.blogspot.com/ said…
Good job dear, atleast some people are working for the cause of Hindus.
April 15, 2008 at 10:12 AM