"Deganga and the Hindu Protest" - Interview by Upananda Brahmachari 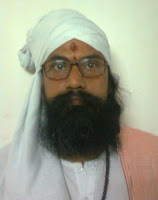 The following comminque was written by Upananda Brahmachari while he was jail for participating in the Barasat Hindu Samhati Rally, protesting the anti-Hindu pogrom in Deganga in early-September, 2010.

This is my third imprisonment in my organizational life. First & second time I went to Alipore Central Jail & Diamond Harbor for the cause of passive Hindutva under the banner of B.M.S. & R.S.S. respectively (for labor problem in the first instant and for demand of speeding up the hanging of Afzal Guru, the attacker upon the Indian parliament).

But, this time in Dum Dum Central Jail, I came with my 7 fellow colleagues (including Sri Chittaranjan Dey, General Secretary of Hindu Samhati, Sri Amitava Adhikary, Dist. President of North 24 Parganas and Sri Goutam Naskar, prominent Hindu Samhati co-coordinator) for the cause of active Hindutva and obviously for the cause of restoration of Hindu dignity severely damaged in West Bengal.

To Read the Full Interview, Please Click the Following Links: