Like other years, Kolkata in this year too, witnessed reverence to the divine self-sacrifice of Dr. Shyama Prasad Mookerjee, on June 23. However, there has been a significant difference in this year. To observe Dr. Mookerjee’sMartyr's Day (Balidan Divas) austerely a program was organized by Dr.Mookerjee Smarak Samity at Keoratala Burning Ghat, Kolkata in the morning.

It was graced by the ardent participation of Sri Subrata Bakshi, senior minister in the reigning Government in , and Begum Farzana Alam, Deputy Mayor of Kolkata Municipal Corporation. Both were witnessed to pay floral tributes and garland statue of Bharatkeshari Shyama Prasad.

Several other dignitaries also embellished the occasion and these included Dilip Maharaj of Bharat Sevashram Sangha, Tapan Ghosh, Amitava Ghosh, Mihir Saha. The speakers, through their speeches, highlighted the profound contribution of Dr. Mookerjee, well-known educationist, political leader and above all a great patriot who sacrificed himself for Bharat Mata in 1953.

Quite a few such programs took place in different parts of Kolkata as well.Dr. Shyama Prasad Mookerjee Smarak Samity organized a convention in his memory at Student’s Hall, Kolkata, in the evening. Noted speakers there while heeding the glorious dedication, contribution and gallant struggles of Dr. Mookerjee depicted how the same problems (leading to his death) are afflicting present India also. 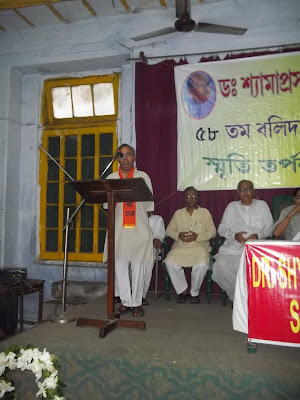 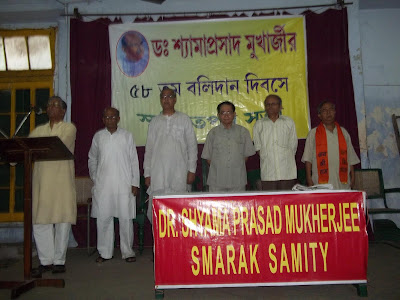