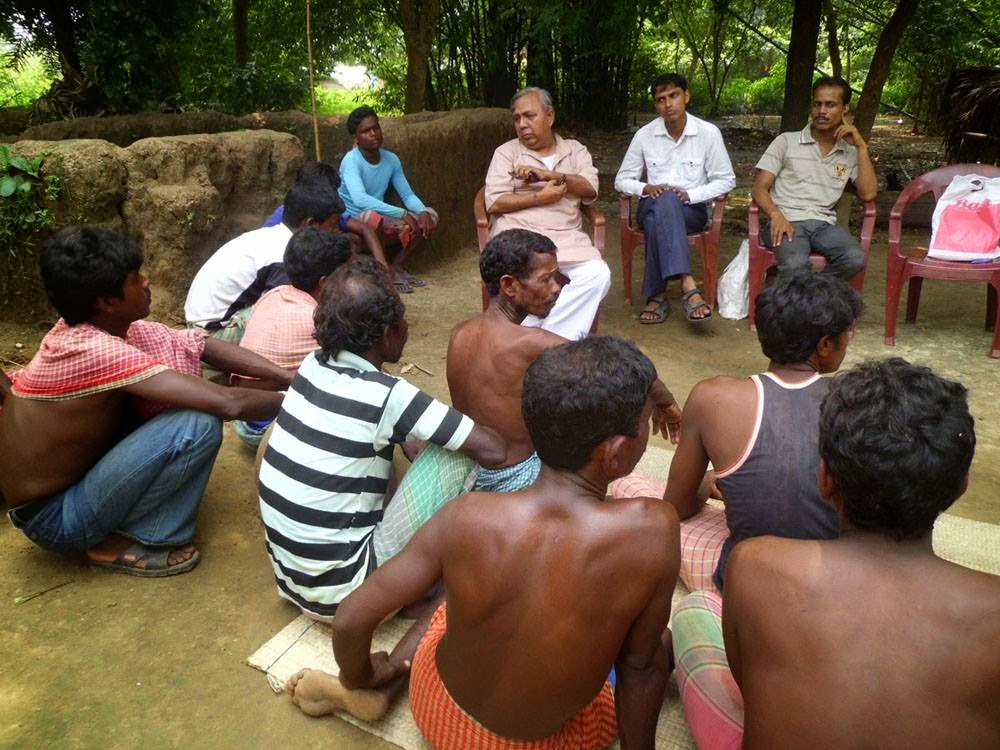 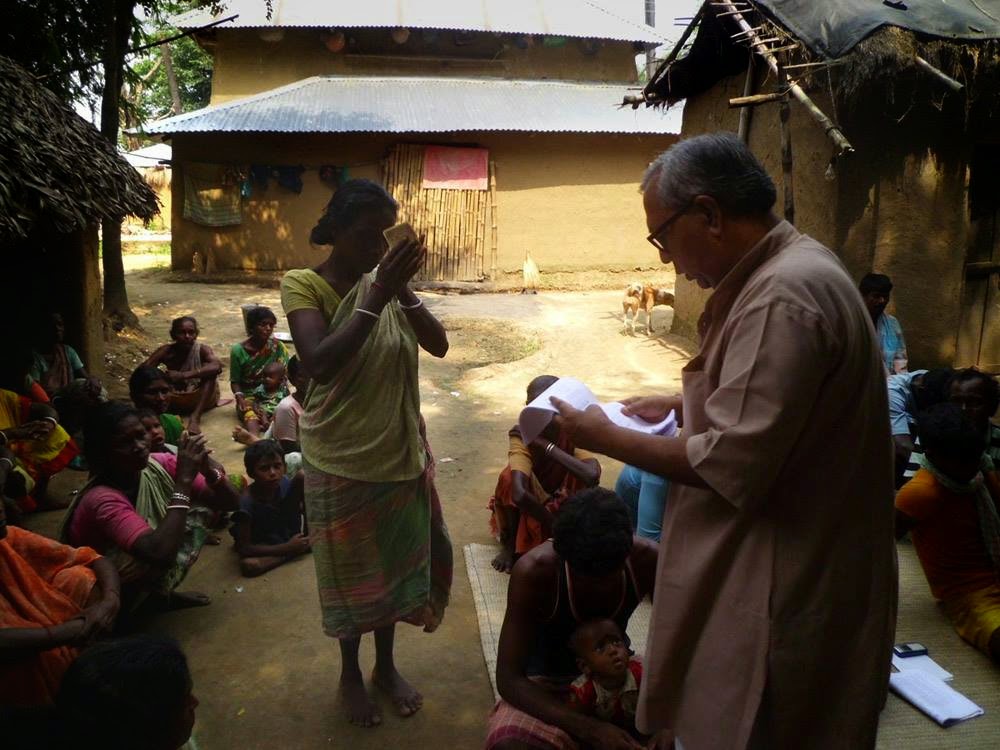 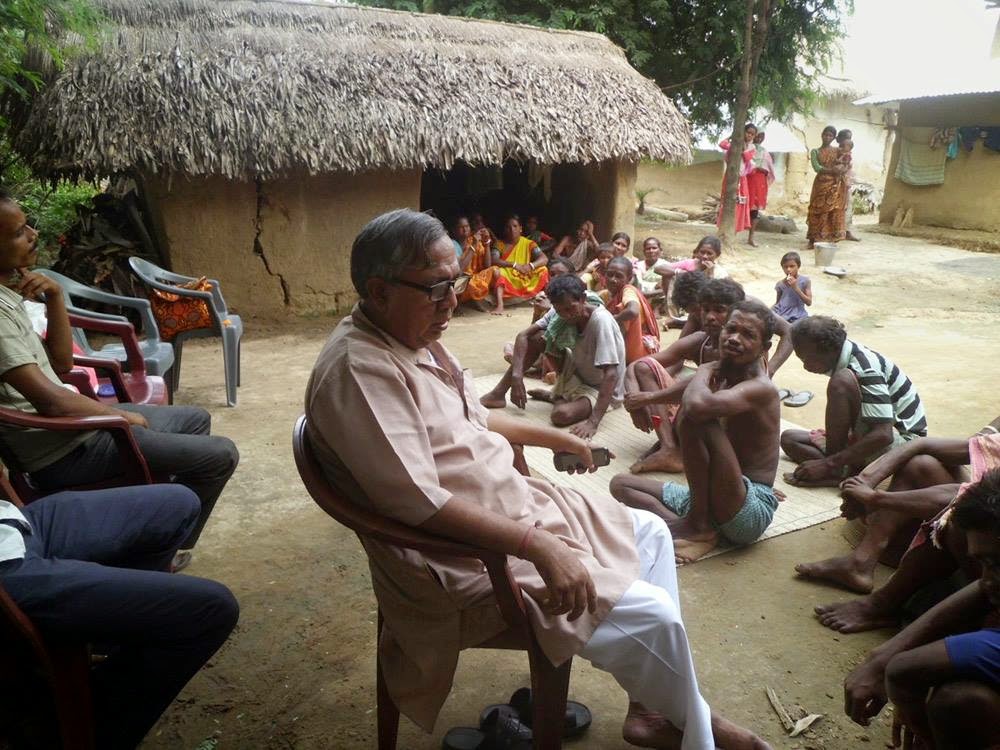 First, a quick recap. From day one, he was confident that this is a false concocted story not only to defame the Santhal tribals, but also to break the spine of this courageous community who are trying hard to preserve their culture and protect the honor of their women from the lust of Muslim miscreants in a very wide region of West Bengal and Jharkhand. The so-called victim girl has written in her complaint (on basis of which the case has been registered and 13 persons arrested) that she was to marry Khaleq Sheikh of Chouhatta village, and Khaleq Sheikh came to her house for discussing the marriage. This Muslim man Khaleq Sheikh is already married and has 2 children. His wife Hasina Bibi had confirmed that their 15 year old daughter's marriage preparation was going on, at that time. This Khaleq Sheikh, villagers complained, has illicit relations with this village's so-called victim girl of Santhal community. Khaleq gives her a lot of money. Hence, this is a type of prostitution, villagers alleged, due to which this village's environment was being badly vitiated. Hence, the community elders and women repeatedly told her to leave the village. But the 20 year old girl refused to obey them. Therefore, the village women were watchful and determined to catch them red handed and end the matter by compelling that girl to leave the village. However they had no idea that this would bring so much trouble and so much ignominy to the entire community.

These 13 innocent Hindu Santhal tribal boys and men have been falsely accused by the media, framed by the police, mocked by the "civil society intelligentsia" and forgotten by their fellow countrymen.
This, according to special sources, is a success of a deep conspiracy to break the self-protection system of poor illiterate tribal society of West Bengal & Jharkhand. However, although the tribal villagers (only 27 families) are almost broken in their spirit, they will appeal in Calcutta High Court. Surely we'll help them. Today I assured them of our help to fight the legal battles but we need funds to pay for lawyer expenses, fees etc. .
Sri Ghosh, helped the victim families with whatever little financial assistance that we could muster. Although they're in no mood of Durga Puja celebration, but we will still give them some new clothes to the children. If my friends want to extend a helping hand, they may do so. Among the families, few families are starving 2-3 days a week. In the families where food/meals are being cooked, many of them cannot eat due to depression.

Vijayalakshmi said…
Please write to the President of India about this injustice,and send a copies of it to the PM and HM.
October 10, 2014 at 1:39 PM

atoz said…
THERE IS WIDE DISTANCE BETWEEN WHAT THE LAW IS TODAY AND WHAT VARIOUS GROUP OF PEOPLE BELIEVE .WOMEN ARE TODAY HAVE MORE RIGHTS IN LAW THAN MALES .WOMEN HAVE NO RESPONSIBILITY .ON THE ONE HAND WOMEN ARE CONSIDERED EQUAL TO MALES AND GIVEN EQUAL RIGHTS TO MALES ON THE OTHER HAND WOMEN CLAIM THEMSELVES TO BE WEAK THAN MALES AND CLAIM SPECIAL RIGHTS FOR THEMSELVES .UNLESS TRUTH IS NOT UNDERSTOOD AND LAW IS NOT MODIFIED SUCH THINGS ARE GOING TO OCCUR.HARDLY THERE IS PUNISHMENT GIVEN TO ANY WOMEN FOR LEVYING FALSE RAPE CHARGES WHICH IS THE ROOT CAUSE OF LEVYING FALSE CHARGES.WOMEN MARRIAYING LATE CAUSES THEM TO HAVE ILLEGAL RELATIONSHIP .AS PER LAW EVERY ADULT HUMAN BEING IS FREE TO HAVE HIS/HER RELATIONSHIP. WOMEN CAN NOT BE STOPPED FRO HAVING RELATIONSHIP WITH ANY MALE SHE DESIRE AS PER LAW.
November 15, 2014 at 11:30 AM