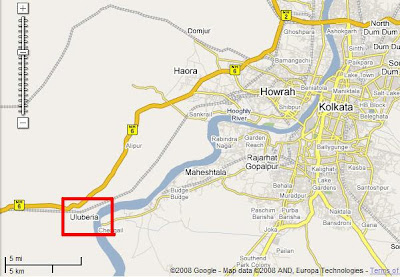 Uluberia, Howrah District, West Bengal
A most alarming and depressing followup on our report on Uluberia. As our readers would remember there was an obstruction and scuffle with local Muslims regarding the passage of the Kali Puja immersion procession in Uluberia town, Howrah district. Then the local Muslims had threatened that they would not allow the coming Jagaddhatri Puja procession to pass before their mosque. 30 local clubs had convened a meeting to discuss this threat and decided that Hindus would not bow down to threats and the immersion procession of Jagaddhatri Puja immersion would follow the same route it takes every year. As the matter came to pass - Muslims have succeeded, of course with the generous help of the most obliging West Bengal Police.

The problem began with the Dakbangla Sarbajanin Jagaddhatri Puja (Old) of Ward no.4 of Uluberia town. The members of the Puja Committee belong to either the CPM or the Forward Block. Every year the immersion procession goes through the main street of the town but this year there was some problems with the local Muslims during Kali Puja. The Muslims threatened that they won’t allow the procession to pass before their mosque at Bhaktar More (crossing). 30 local clubs united to declare that they shall take the procession through the same route they follow every year.

On 4th November, 2008, the local MLA and Left Front minister Robin Ghosh of the Forward Block convened a meeting in the area and promised that the procession would be allowed to go through the regular route. But on November 8 morning, the day of immersion, the Sub Divisional Officer and Santu Ghosh, the Vice Chairman (Forward Block) of the Uluberia Municipality threatened the Dakbangla Puja Committee that no procession must cross the Goruhata More (a Muslim locality comes before Bhaktar More – where the masjid is located).

On that day, 8 November, the members of the 30 clubs and a few thousand local Hindus gathered for the Immersion Procession. But the Puja Committee – getting cold feet – declined to take out any procession. Fighting broke out immediately between the Puja committee and the locals, who insisted that the procession must be taken out. A huge police force appeared immediately (the Committee members must have prearranged this with the police and the Municipal authorities, as the police in West Bengal take their own sweet time even for murders and arson) and without any warning lathi charged the Hindus and dispersed them. Many of the gathered were seriously injured. The Puja Committee silently and stealthily immersed the Image in the Ganga – without a procession.

At the same time thousands of Muslims had blocked the road near Bhaktar More, in front of the Masjid, to obstruct the coming Jagaddhatri procession. But the police force present there, simply looked on and did nothing.

At Bazarpara, there was a new and small Jagaddhatri Puja of Rupantar Club. The police, led by the Inspector-in-Charge of the Uluberia PS - Rezzak Mollah, threatened and misbehaved with the Puja committee, without any provocation, and forced them to immerse the Image of the Mata in the nearby canal rather than the Ganga.

End result – no procession. Even a Left Front minister could not keep his promise. Maybe it’s the Lok Sabha Elections in 2009. Or maybe it’s a foretaste of the days to come in West Bengal, redolent of the days of the League Ministry in ’46. And the innocents and babes-in-the-woods of the media wonder why the Hindus, all over India, are taking to the warpath!

Unknown said…
shame to all hindus of the country, brothers you are again on the path of dependancy under these muslim rulers(CPM), learn some lessons from Lt.col. Purohit and go all out against these traitors.

Darren Demers said…
The problem began with the Dakbangla Sarbajanin Jagaddhatri Puja (Old) of Ward no.4 of Uluberia town. wholesale raglan shirts , cheap bulk t shirts canada , wholesale shirts canada , plain t shirt wholesale suppliers , wholesale black t shirts bulk , yellow t shirts bulk , wholesale childrens clothing in bulk , designer baby clothes online , baby dress wholesale , where can i buy baby clothes wholesale The members of the Puja Committee belong to either the CPM or the Forward Block. Every year the immersion procession goes through the main street of the town but this year there was some problems with the local Muslims during Kali Puja. The Muslims threatened that they won’t allow the procession to pass before their mosque at Bhaktar More (crossing). 30 local clubs united to declare that they shall take the procession through the same route they follow every year.
April 5, 2020 at 7:37 AM