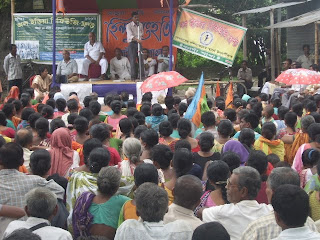 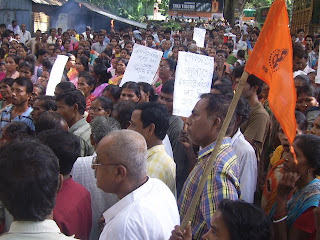 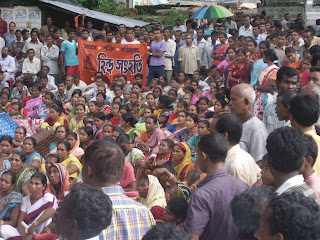 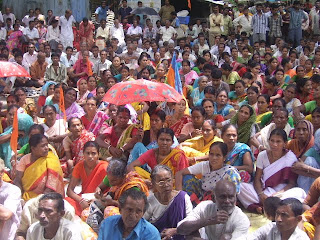 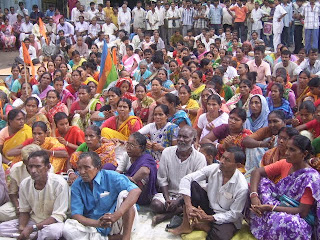 On 27 th July a memorandum has been submitted to Gaighata B.D.O. dist. North 24 Parganas, jointly by Hindu Samhati and All India Refugee Front in protest of irregularities and anti Hindu attitude of government and Election Commission. On one side the govt. and the Election Commission are denying voting rights to the Hindu Refugees who have come to India after being persecuted in Bangladesh, on the other side, under the pressure of the anti national secular political parties, the Commission is showing no inhibition to enroll the names of thousands and thousands of illegal Bangladeshi Muslims.

The huge gathering on the occasion of this mass deputation shows the state of condition of these hapless Hindu Refugees.

The memorandum was submitted to Mr. Partha Bhowmik, the B.D.O. of Gaighata Block at his office at Chandpara Bazar. Renowned writer Nitya Ranjan Das, Mihir Nag, Dulal Samaddar, Sanjib Chakraborty and Sujit Maity on behalf of Hindu Samhati and Gyanananda Rana and Ashok Pal Chowdhury on behalf of All India Refugee Front represented the deputation.

knowing islam said…
Why will anyone support Hindu refugees? After all, these Hindu fascists might go for supporting BJP? And this can not be allowed. Mostly, speaking for these hapless people will not give any media coverage and might even bring the label of Hindu extremists.

But if Muslims are in their place? One can guess the fall out. The media and politicians in this country are shit and nothing but shit.
July 29, 2010 at 5:34 AM