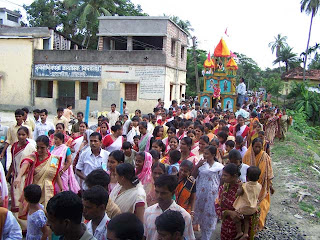 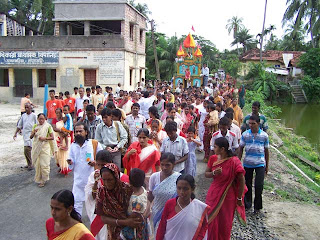 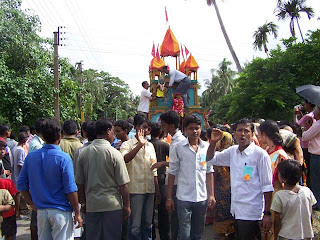 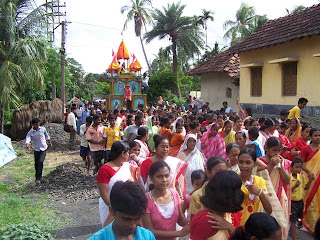 On 21st July, there was Return Ratha Yatra Festival at Dalanghata in South 24 Parganas district. The situation was tense as the place witnessed a major communal attack by the Muslim miscreants in the area on last 14th July in which 2 Hindu Temples were ransacked, Deities were broken, Police were attacked, Police vehicles were burnt and huge public property was damaged. It was apprehended that the turn out of the Hindu disciples in this Return Ratha Yatra will be less.

So, Hindu Samhati volunteers spread out over the villages around, organized village meetings, mobilized people and encouraged them to attend the Festival without fear. The message was conveyed that Hindu Samhati workers are determined to protect the Hindus in the Festival from any attack or humiliation from any quarter.

So, the turn out in the Yatra Festival was huge. Hindu women in large number joined the Festival. The Hindu people in this district are not really cowards.

Since 20th July evening many news and/or rumors were reaching to HS office that a large number of Muslim criminals with lethal arms from outside were being brought to the area, etc. HS workers remained alert about the situation. Since yesterday morning more than 400 HS volunteers assembled at the Festival place. They put up stalls with microphones from which announcements were made. Speeches and religious discourses by the Seers and Hindu leaders were delivered. Police contingent was deputed there to maintain law and order. HS volunteers kept strict vigil throughout the Ratha Yatra route and the Festival place.

Till afternoon Police was cooperative. But anti Hindu forces were active behind the scene. Hence, since afternoon Police behaviour started changing. First they tried to threaten the HS workers to stop the speeches. Heated arguments took place. Then they tried to wrap the Festival early. The Officer in Charge of the Kulpi police station Mr. Suryasekhar Chakraborty and one Sub Inspector Mr. A. K. Mandal misbehaved with the Hindu Samhati representatives. But the enthusiastic Hindu public protested vehemently and thwarted their ill motivated move.

Confidence of Hindu people in general and HS workers in particular restored and enhanced.

Anonymous said…
This was great! HS is doing a great job of uniting Hindus. Along with such steps, Hindus need to arm themselves with trishuls, swords, or guns(if necessary to fend off muslim goons).
July 23, 2010 at 5:11 PM

Unknown said…
The HS is the only hope for the Hindus of the Bengal. Go ahead reach to each village and unite Hindus.
July 24, 2010 at 7:03 AM

Gudden-Online Shopping India said…
Iedig - Blogger Social Community for you to submit your Blog , story Get Do-follow Back-link and share with people. which helps you to get more Hits If you have a good story, members will 'Vote' the post and write comments. As a blog owner, you may want to make it easy for and encourage your readers to Visit on Your Blog. Join Iedig.com
July 27, 2010 at 6:51 AM