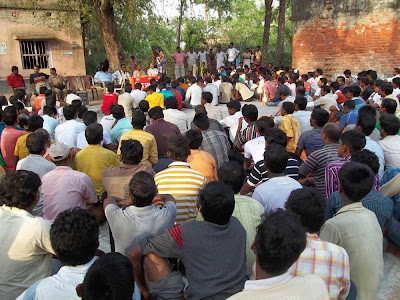 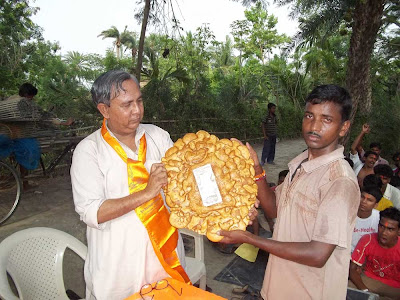 Yesterday,10th. May 2011; a grand meeting of HS was held at Malancha in Minakhna block of North 24 Parganas district.

The background should be narrated in brief to make everybody understand the sinister design of Islamic expansionism going on unabated in every nook and corner of .

Malancha is a very important junction on its way to Kolkata and several Police stations like Minakhna, Sandeshkhali, Haroa, Basirhat and Hasnabad submerge on this point. Muslim settlement, domination and capture of these strategic locations is a well known fact and they have meticulously executed this throughout the entire length and breadth of the state. They have eyed this Malancha junction for long. Their recent activity and use of violence and force is a clear indicator towards their capture of this vital Malancha junction.

ystematically, the Muslim local goons have been beating the Hindu activists in that area for last one year, especially after the victory of Haji Nurul Islam in last Parliament Election of 2009. They have been intimidating the local Hindu businessmen and offering very high price for purchase of Hindu property in Malancha market. They have succeeded to a good extent also. Three months back, the local leader of Bajrang Dal, Sri Jaideb Adhikary was picked up and mercilessly beaten black and blue. This was not answered by Bajrang Dal. This has happened in many places.The local Hindus got demotivated after the Jaideb incident and Muslims got greatly encouraged after observing no response and accelerated their speed of encroachment in and around Malancha junction.

It was from this point of absolute hopelessness that Hindu Samhati took over. On several occasions,

retaliatory grievance redressals were undertaken. Even Momin, the main culprit of Jaideb was made to apologize publicly. The Hindus are now feeling comparatively safe and secure, but local Muslims have changed political side and gravitated towards TMC and the post election scenario may witness new equations that may aggravate Muslim violence in new form and grab but with the same fundamental motive of capturing Hindu area and property and increasing Islamic sphere of dominance.

On 11th instant HS meeting was conducted at village Malancha and 300 youths from local villages listened with rapt attention the message of HS Chief Sri Tapan Ghosh. Sri Ghosh urged the young blood to abandon cowardice in all its' ramifications. Avoiding cowardice solves half the problems. He also urged everybody to rush to any troubled spot immediately and stand by the side of the distressed Hindu Brethren with full confidence. HS would stand by the side of the affected persons whole heartedly and would never shy away or procrastinate. This was his firm message and the crowd got electrified. Mr. Narain Ghosh, the district president of HS urged the crowd to spread the message of Hindu solidarity to every Hindu household. Mr. Tanmoy Pal, the district secretary discussed on Organizational consolidation. Mr. Mrityunjoy Shau, the wholetimer of HS deliberated on strategic planning and tactical manoeuvrability. Mr. Pradeep Das conducted the entire meeting and at the outset presented Mr. Ghosh with a novel present of a design made of Batasha, a form of sacrifice to Hari, and this was fed to all after the meeting was over.

Two guest speakers from Sarberia of neighbouring Sandeshkhali P.S. also narrated the daily torture they undergo at the hands of their Muslim neighbours including molestation, daily harassment, insult and few of them got hospitalized when they tried to rescue a Hindu girl.

The meeting was a grand success and its' timing could never be more appropriate and all returned from the meeting with a strong determination of courage and resistance and Hindu brotherhood.