From the site of Hindu Devastation of Canning

Click here for Photos of atrocities and devastation in and around Canning. 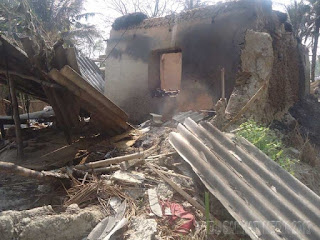 
What has taken place in Naliakhali and 3 other villages yesterday (19 Feb) is virtually an anti-Hindu pogrom which fails to match the chronicle of Hindu persecution even. Hindu Samhati’s investigations at the helpless village on February 20, 2013 reveal that the entire event was not the result of any spontaneous onslaught by enraged Muslim radicals (following the murder of Moulavi Rohul Kuddus) but of a specific project contrived by brains hell-bent to exterminate Hindus racially in the very area.

Some other disturbing and weird facts, as a result of investigations and talks with helpless Hindu villagers at Nailakhali, have come to the fore. It has been learnt, albeit violent Hindu persecution started at the wee hours on February 19 its extent was somewhat low till 8 am.

At morning 8 am Muslim school teachers of Goladohra Naliakhali Harinarayani Vidyapith (local school) were witnessed to conduct a meeting where Hindus were proclaimed as solely responsible for the murder of aforementioned Moulavi. While Abdul Salam Mollah, Headmaster of school, presided over the gathering, it was joined by a few other teachers of the school including Moulavi Shamsul Alam, Giyasuddin Ghazi, Khatip Mollah and Rezaul Mollah. Teachers were unanimous regarding one issue – to avenge the death of Rohul Kuddus and teach Hindus in the area a brutal lesson thus.

The meeting proved to be highly successful to stimulate the huge gathering of Islamists (almost 30,000) there leading to the commencement of wild Islamic oppressions on Hindus.

According to local Hindu villagers, Abdul Salam Mollah, aforesaid Headmaster, is known for his anti-Hindu views for long. Not only he is found to raise “Pakistan Zindabad, India Murdabad” slogans in the school at times, but his anti-Hindu views trouble Hindu students also highly. It has been heard, his ardent opposition to Devi Saraswati Puja in his earlier school led to his transfer to Naliakhali High School. His views then were censured severely by guardians there.

Thousands of Hindu victims in Naliakhali have also asserted that police was found to be surprisingly indifferent to the entire episode. Even if Hindus pleaded with them to stop the rampaging Muslim radicals, they remained tightlipped; they retained the same posture when the same Muslims were found to take petrol (which was used for burning Hindu houses altogether) from police’s vehicles.

Why did the police and administration deal with the case so lightly? Why was the body of the slain Moulavi not removed from the area by police and left to stimulate Muslims only? These questions are going around throughout the area at the moment.

Nevertheless, the homeless Hindus are yet to find the answers and they have no other option except to feel sorrow. No less than 200 Hindu houses have been fully looted, burnt down and turned into dust; there has been no governmental assistance or declaration of compensation (even if present Bengal government was amazingly fast to declare Rs. 2 lakh as compensation for every Muslim who died in the hooch tragedy) yet. And there is no expectation of any such to Hindus in Naliakhali. In absence of the same, Hindus, unaffected yet in the neighborhood, are gearing up to arrange relief measures for Hindu victims.


Hindu Samhati regularly monitors and reports violations against Hindus in West Bengal. We also work with both governmental and NGO agencies for proper education on protection and ensure remedies to the Hindu populace as per prevailing law of the law of the land.

Angshuman said…
Cannot identify the authenticity of the incident from the pictures. However, whatever happenened wherever like this magnitude, must be dawing media's attention. Why others are so mum on this? This is understandable, if there were some chances of inciting violence which may lead to further casualties....but we are seeing a violence has already taken place.

Angshuman said…
Just found out the news article, which authenticates your blog.

Things like these will push us to call for a ban on radical Muslims, just like Bangladesh is demanding against Jamat-e-Islami there.
February 21, 2013 at 12:56 AM

matereo said…
Believe me we all will have to do like Spain once and ban Islam completey, and send those who wish to keep practicing this "Kill all unbelievers" cult out.
February 21, 2013 at 9:04 PM

Unknown said…
This is horrible. 30 000 all attacking the few minority Hindus! Its like another version of the Holocaust, except this time on Hindus.
March 4, 2013 at 11:18 PM

Unknown said…
It is barbarism{jehad}of Islam and
edict by Alla(koran).(Alla + coran +
muslim) = Islam.

Unknown said…
Shocking yet not surprising.D governmental set up of police and civil administration have become pawns in d hands of d political class......d 'esteemed' class of power brokers at d helm of affairs.Helpless d hindus may feel today but all such occurences wd ignite d flame within and lead to a struggle for existence not far away.D dead r martyrs for dat noble cause.Hence even tho my heart weeps for dem I value der sacrifice for a brighter tomorrow.
December 19, 2014 at 10:45 PM