Surrender leads to annihilation only

Hindu religious organizations have always been witnessed to have confidence in all, never demarcate between coreligionists and aliens and emphasize sanctified notions of love and universalism casting aside potential of any violent counterattacks. This practice has been going on down the centuries despite rendering no benefit thus far. There is no hope of such also. And the reason behind these all is not far to see. The chronicle of benevolence intrinsic in Hinduism has been interpreted wrongly always. It has always been discerned as akin to cowardice or gutlessness and this understating has become a readymade tool for anti-Hindus to maim the Dharma, its basis and also its adherents. Whether in India or Pakistan or Bangladesh or any other part of the globe, this has been the painful tradition.

The inherent dilemma to stand upright in support of Hindus came forth again when Mamata Banerjee, Hon’ble Chief Minister of Bengal, was seen to join the Rath Yatra organized by ISKCON or the International Society for Krishna Consciousness in Kolkata, along with a host of members of the state cabinet on June 29, 2014. Albeit she has always been in the news for all wrong reasons since Trinamool’s ascension in 2011 and especially, for her frantic efforts to appease the Muslim community in Bengal to retain a exceedingly loyal, minority vote bank, nothing prevented ISKCON from inviting her to preside over the event. A lady clad in hizab often like her was found to be blessed by Vaishanava priests there even. The effeminacy expressed there failed to impress Islamists and this became evident through the dastardly attacks on an ISKCON temple Swamibag, Dhaka, Bangladesh on June 30, 2014 at 9.30 pm.

Many may find it difficult to ascertain a relation between these events in two countries but in the present age of information revolution, internet has virtually quashed all distances between countries. There has never been any dearth of attacks on Hindus, their religious institutions in Bangladesh. Nevertheless the effeminacy expressed once more through the Kolkata incident incited Islamists in Bangladesh to assail the ISKCON temple in Dhaka, Bangladesh. The terror was unleashed at 9.30 pm when a pack of Islamists, following the namaaz, launched a spate of ghastly attacks on the temple with the adjoining courtyard. No less than hundreds of Islamists participated in the attack and casted bricks with pebbles from outside of the courtyard. Devotees present in the temple had managed to close the main door by then but this even failed to thwart severe damages on the temple and Holy Deities inside it. 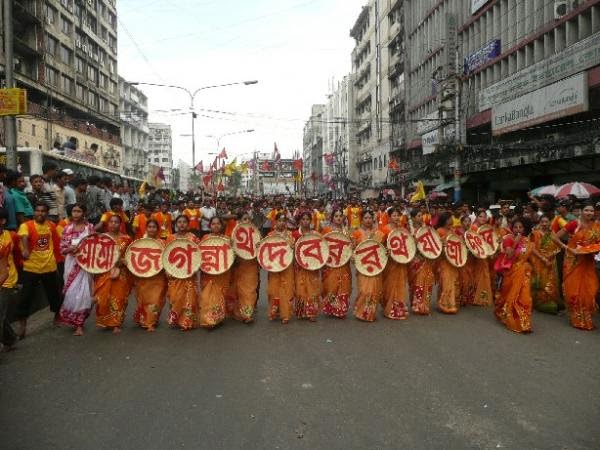 A small group of police officials were present there but they preferred to remain apathetic on the whole. The absence of any countermove prompted attackers more; apart from attacking the Hindu temple, they were found to kick at the temple’s main door and also use filthy languages against Hindus and their Dharma. Finally, with the arrival of a large contingent of police, the situation calmed down. It has been learnt that the weeklong Rath Yatra festival held by Hindus annoyed Muslims most. The festival has been playing a major role to unite Hindus in the vicinity and Muslims consider this as a threat to Islam. To teach Hindus a lesson, they came out after the namaaz of Ramzaan and attacked the Hindu institution.