In a very befitting manner Hindu Samhati’s Kolkata unit observed 1st anniversary of Mumbay mayhem on 25/11/09 at College Square in front Calcutta University . Hindu Samhati, Kolkata organized this occasion to pay deep respect to the Great Martyrs and to express whole-hearted sympathy to the bereaved families of the martyrs with specific demand to hang Azmal Amir Kasab, the lone Paki terrorist still alive and under trial in the special court meant for the case.

The function was presided over by Kanti Majumdar. Barid Baran Guha, Dr. Arun Giri, Prokash Das, Pratap Hazra, Upananda Brahmachari were the other speakers and dignitaries on the occasion. A major flank of the supporters of HS gathered to pay tribute and demanded immediate hanging of Kasab by shouting slogans and distributing leaflets published for this occasion.
In his maiden speech Tapan Ghosh, President, Hindu Samhati vehemently condemned the delay in the 26/11 case and the notorious design of both the Central and West Bengal Government to allow the Islamic expansionism fortified with blatant appeasement of Muslims, financial support to Islamic Mosques and Madrasas, uncontrolled growth of childbirth of Muslim community and the large scale illegal infiltration by Muslims from Bangladesh. Ghosh described all these as the main causes and life lines of the growth and refuge of Islamic terrorism growing inside and coming outside from India.
Tomorrow a number of programmes will be held in districts on the same issue. 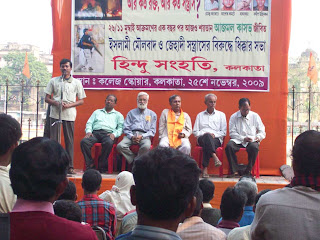 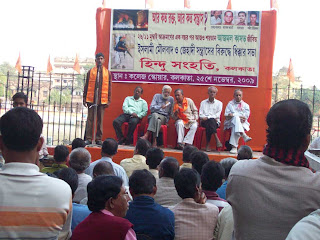 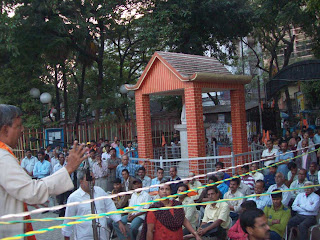