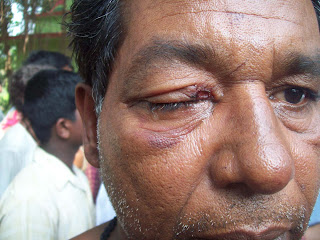 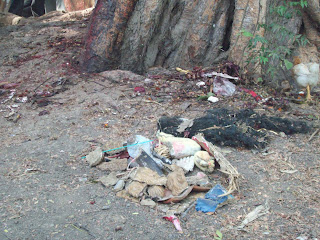 Broken Idols of the Temple 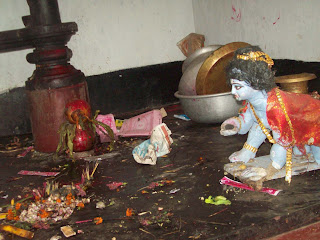 Broken Idol of Bal Krishna inside the Temple

The onslaught of resurgent Islamic faith (thanks to West Bengal’s Islamic custodians like Trinamool Congress) on Hindus in Bengal is unabated and as part of the same series, the age-old Shiva Temple at Pagla Tala in Haringhata P.S. (Police Station) area of Nadia District, famous for holding Pagol Thakurer Mela for centuries right from the time of Raja Krishnachandra Roy, becomes the latest target of the Muslims.

The Muslim mob also severely damaged and looted the shops (25 nos. approx.) of the Hindu people, bodily hurt the Hindu people and looted their belongings, for example, money, jewels, mobile phones, etc. They looted 26 bicycles of the visitors, 20 plastic chairs and 40 bamboo sticks used for barricades of the mela.

The fundamentalist Muslims who led this marauding mob are :

When they were destroying the idols of the temple, Smt. Renuka Bakshi, Priestess of the temple protested. She was threatened that she would be killed if she did not keep quiet.

The attack started at about 7 pm. Mela Committee repeatedly informed the Haringhata Police Station over phone. But the reply came from the police (a) there was not enough police personnel, (b) they have no car to go, (c) there was no petrol/diesel to run the jeep, etc. etc.

About 5 hours after the incident started, police came. Seeing the seriousness of the incident, they arrested 14 Muslims from nearby Muslim village Mitrapur Muslim . But under pressure of local Trinamool Congress leaders Biswajit Roy, Nemai Das and Chitta Das, they all were released next day.

Police took away with them all the broken idols to the police station ignoring the objection of local people. This act of police is totally irreligious and against the rituals of Sanatan Dharma.

The Hindus of the area are feeling absolutely insecure and threatened. An exodus of Hindus from the area is just a matter of time.

Anonymous said…
做愛限制級波霸口交18禁貼圖寫真視訊援交露點爆乳潮吹裸體裸照裸女愛愛無碼尋夢視訊聊天a漫a片a圖一夜情一葉情人妻激情情色寫真美女自拍辣妹自拍正妹自拍美女走光辣妹走光正妹走光脫衣秀
April 8, 2010 at 10:36 AM

Unknown said…
How shameful for us,Hindus...we are reading this report and doing nothing... If they do this to us,we should at least protest or do the same to their west facing shrines...
April 29, 2010 at 8:38 AM

bhattathiri said…
Indian Vedic contribution is a reservoir of Vibrant Information and Harmonious Creativity. May the Womb of Nature Embrace all with Tranquil Blessings from this day forward. Let this attract one's attention affecting them Positively. It is a Sanctuary of the Self , a Creative Venue which serves as an Enduring Expression of Lightness, where a peaceful Atmosphere with Sunlight Flows and serene atmosphere prevail.

In the storm of life we struggle through myriads of stimuli of pressure, stress, and muti-problems that seek for a solution and answer. We are so suppressed by the routine of this every life style that most of us seem helpless. However, if we look closely to ancient techniques we shall discover the magnificent way to understand and realize the ones around us and mostly ourselves. If only we could stop for a moment and allow this to happen. May all beings be happy (Loka Samastha Sukhino Bhavanthu)

The Holy Gita is the essence of the Vedas, Upanishads. It is a universal scripture applicable to people of all temperaments and for all times. It is a book with sublime thoughts and practical instructions on Yoga, Devotion, Vedanta and Action. It is profound in thought and sublime in heights of vision. It brings peace and solace to souls that are afflicted by the three fires of mortal existence, namely, afflictions caused by one's own body (disease etc), those caused by beings around one ( e.g. wild animals, snakes etc.), and those caused by the gods (natural disasters, earth-quakes, floods etc).
July 22, 2010 at 4:52 AM

Dr.Gour Mohanty said…
It is time that the Kirtaniyas of Nadia must be told to throw their mridanga (khola) and jhanja(gini) and take to guns and daggers to defend themselves and their religion and their Gods.It is foolish to think that Gods would come to their rescue;rather it is they by their manliness and strength can defend their Gods and temples.This in general is to be followed by all sects of Hindus and the Dharmacharyas should come forward to guide the Hindus.It is only Savarkar's dictum to Militarise Hindus and Hinduise Politics that can save Hindus and India from being enslaved in a decade or so .
August 19, 2010 at 2:04 AM