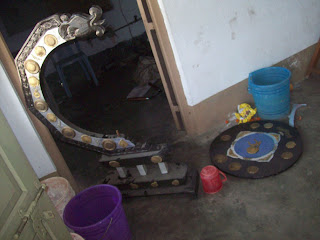 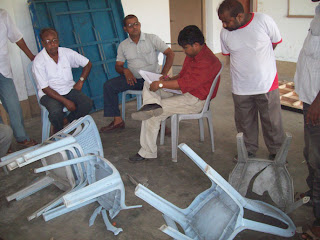 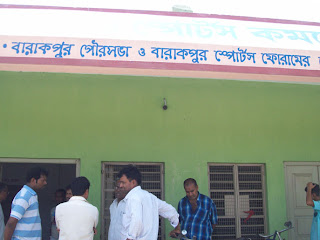 At the Barrackpur Sports Complex ground in Barrackpur town in Warless Gate Royal Park area, players (both male and female) were practicing, some Muslim boys (aged between 16 and 22), sitting beside the playing fields, started whistling and taunting on the female players of the club. This eve-teasing is a regular phenomenon there. Then the Muslim boys called a female player named Dona and pressed her to give her and her friends (all girls) mobile numbers. Dona was scared. Somehow she fled away from that corner of the ground, they started shouting ‘WE WILL GO TO YOUR HOUSES. WE’LL SIT ON YOUR BEDS, and WE WILL DO-------‘

Hearing this, other fellow Hindu players, who were warming up there, protested against this. They too were slapped and thrashed by the hooligans. For protection all the players took shelter inside the Club building.
Then at around 6.15 pm, about 50-60 boys (age 16 – 22) came and entered the club building, specially in the bathrooms and the girls' dress changing room. The intruder boys started beating everyone of them black and blue.

5 – 6 girl players were severely injured. Among them 2 Hindu girls, named Puja Singha (17) and Dolly Biswas (14) were mercilessly beaten up.

Puja Singha, who was admitted to a local hospital Sarada Nursing Home for 2 days told the HS visiting team members, “I was mainly beaten up on my breast region, they stood on my breast and kicked me up.” When the correspondent asked her, who were those boys and whether she knows anyone of them? She replied that all of them were Muslim boys from Mohanpur (Chopkathalia) Masjid Para. Puja Singha also said that earlier too these boys used to taunt and whistle upon them, and they (the girls) complained to the club members and secretary about this.

On 18.04.10 HS visiting team members met the club authority and asked them about this incident.

Club Secretary Ajay Barman Roy, a local CPI(M) leader, asked our representatives not to write anything that will prevent Muslim boys from playing on this ground. When he was asked why he did not prevent the Muslim boys when they were teasing and insulting the girl players for so long, he replied that he can’t say anything more and he suggested to ask Bishnupada Chaki, a senior member of the sports forum, about the detail.

When contacted, Bishnupada Chaki’s face was pale due to fear. He said that suddenly 50-60 people came and started looting and demolishing the Sports Complex properties. The club authority requested them not to do so, but they didn’t pay hid to them. Chaki said, the hooligan boys have beaten up the female players severely, specially on the breast region. Then Bishnupada Chaki said that some senior members from Masjid Para namely Salam(36), Kalam(38) and Moba removed them after the incident.
Salam, who is also a local CPIM leader, asked the club members not to report the incident to the police. He also started removing the signs of destruction in the Sports Complex building. The local people agitated over it and then only he stopped doing so.

The Sports Complex / Club authority made a general complaint to Titagarh Police Station, without naming any culprit out of fear. The G.D. no. is 1211 dt. 16.04.10. They lodged a written complain to the Addl. Superintendent of Police of North 24 Parganas district on 18.04.10. They informed the matter to the local Panchayat Pradhan Premchand Biswas (CPIM) and Barrackpur Municipality Chairman Bijoli Kanti Mitra (CPIM).

At the time of the incident, one Muslim boy named Imran protested the misbehaviour of the other Muslim boys. He was also beaten up by fellow Muslims.

It was extremely difficult for our representatives to collect the detail information as the local people and club members are scared by both the Muslim hooligans and CPI(M) cadres. That Mohanpur Panchyat and the Sports Complex is totally controlled by CPIM. CPIM is ruling the area since long. They can threaten, suppress and silence the Hindus. But they are absolutely impotent in case of protecting the honour of Hindu women from the rapacity of Muslim goons. And they made the administration absolutely impotent like them.
barrackpore cpim Hindu Persecution West Bengal