December 07, 2008
Date
Mid Nov 2008
Occasion
During the Jagaddhatri Puja ( A form of Hindu Goddess Durga – Worshipped in parts of Bengal, India)
Venue
In a remote village of Rajbari under the jurisdiction of Sandeshkhali police station in the district of North 24 Parganas.
Description of Incident
Common hindu families like every year were celebrating the festival and performing puja. The local Trinamool Congress leader Ranjit Das who is also the Head of the Block, called local police and forced them to stop the puja in the middle. The motive behind is believed to be making a pro-muslim image among the muslim neighborhood keeping in view the forthcoming Lok Sabha elections.
Reaction
The next day all local hindus felt insulted and shocked at the event. They came out in large numbers which turned into a huge procession. It took the shape of the real festival which people wished to celebrate the previous day. It was a common anger and frustration which was seen in the eyes of the common people. It was a spectacular scene of people from all walks of life joining together to burn the effigy of Ranjit Das. Interesting part of it is that people took the procession through the streets of the hamlet with the effigy garlanded with shoes, which was a great hit. At every crossing more and more people joined in. Afterall that is the most which a common man can do against a powerful man like him. It is learnt that he had accomplices in past, in cases of international drug and ammunition trafficking through the porous Sunderban Deltas. 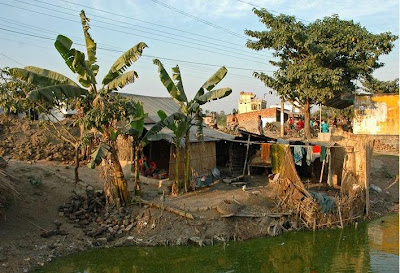