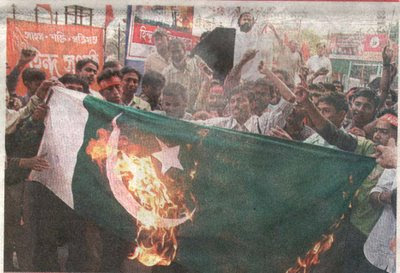 A Pakistani flag was burnt by hundreds of protesters in this metropolis today to condemn Islamabad's alleged hand in the Mumbai terror attacks.

The protesters, who took out the procession in College Street under the banner of 'Hindu Samhati', spat and kicked the flag before burning it and shouted slogans against the Pakistani government.

They also demanded that the Centre act immediately to "teach Pakistan a lesson once and for all".

The terrorists came not to shatter our economy but to shatter our nation, the protesters said, alleging that the November 26 attack had once again established involvement of Pakistan and jihadis.

The protesters later observed a minute's silence in memory of those killed in the audacious attacks. PTI. 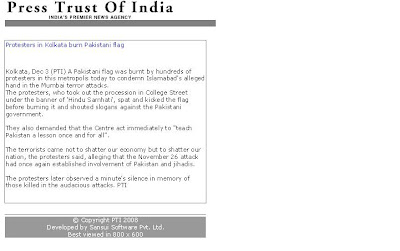 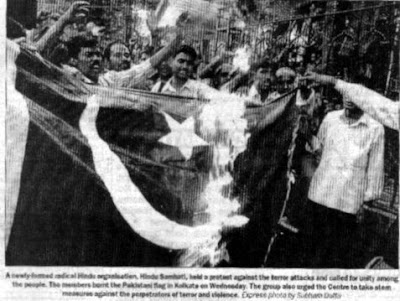 Unknown said…
ahh...what a peace to see Pakistan's flag burning. May the entire Pakistan nation starve to death, let their fathers see their sons and daughters dying spilling blood from their mouth.May God curse Pakistan to destruction.
July 12, 2009 at 8:16 AM

Unknown said…
you indian cunts .... we have lost a lot as compared to you in events ov 47 but still u r jealous.... we are not getting water from the construction of ur baghliar dam, btw we arent protesting but u are jealous... you lost battle of chawinda and stepped back in 1965, once again to destroy the great nation but we taught u a gud lesson(a great gud) but now even u r after us ..... one day when we will dominate u .. then we will deal you so of bitches.. till then , just tongue ur asses ,,,, son of bitches ..... PAKISTAN ZINDABAD
April 18, 2011 at 10:12 AM