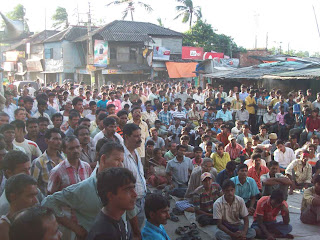 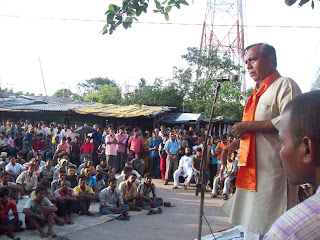 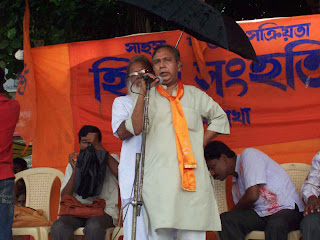 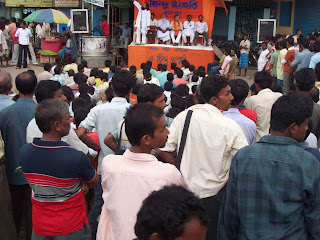 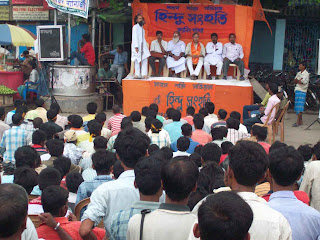 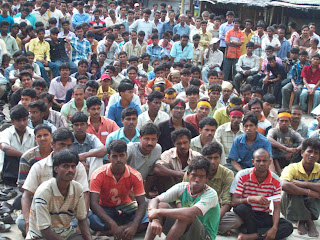 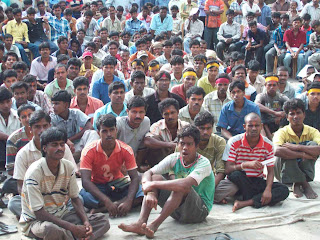 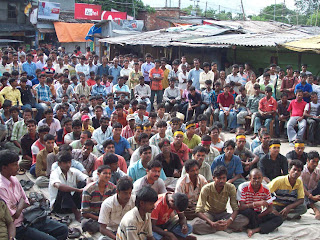 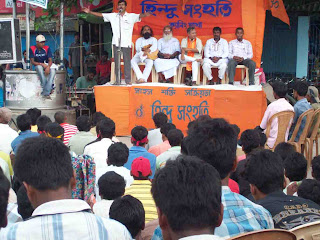 On Sunday afternoon 19th July, a public meeting was addressed by Hindu Samhati President Tapan Kumar Ghosh at Canning bus stand in South 24 Pargana dist. The meeting was a grand success. 400 hundred workers and about one thousand people attended the meeting.
In the meeting Tapan Ghosh said : The situation in the villages of Canning 2 Block is worse than Bangladesh for the Hindus. At least for last 20 years, Hindus in this Block are being tremendously tortured, humiliated and persecuted by the Muslims regularly. So much so that hundreds of Hindu families left their ancestral home for safer destination. To protect themselves, Hindus joined CPIM, RSP, Congress, TMC, even BJP by turn. But no party could give them security. In a latest incident, 17 Hindu families of Dakshin Moukhali were uprooted from their home by the Muslims. The reason : the Hindus joined TMC from CPIM. But not surprisingly, TMC did nothing to protect them as the offenders are Muslims. For many years in some villages Hindu women are being tortured and raped by the Muslim miscreants so frequently that the morale of Hindus has been totally broken. The capable Hindus have been already migrated from this place. The rest are tolerating the intolerable torture and persecution silently. If anyone just record the stories of humiliation and torture upon the Hindus, it will be a great job.
Due to this torture and persecution, and consequent migration of Hindus from this area, the percentage of Hindus has come down from 60.46 to 52.50 in just 20 years (1981 – 2001). And Muslims increased from 39.24 percent to 47.16 percent. In the next census report (2011), it is sure that Hindus will be minority in Canning 1 & 2 Block. In Canning 2 Block, at present Hindus are 36.51 percent and Muslims are 63.17 percent in last Census in 2001. All the tortures on Hindus are engineered by Saukat Mollah, elected President of Canning 2 Panchayet Samity from CPIM and blessed by Rejjak Mollah and Kanti Ganguly, both Cabinet Ministers of West Bengal govt.
This Saukat Mollah owns a few hundred acres of Fishery. Moreover he collects lakhs of Rupees from other fishery owners. It is learnt that Saukat Mollah pays Rs Two Lakhs to Canning police station every month.
So, Hindus have no other option to make arrangements for their self protection. This was the message of this Public Meeting.
Sri Prokash Das and Upananda Brahmachari too addressed the meeting. Bikash Naskar and Rajkumar Sardar conducted the meeting. The meeting helped to raise the morale of the local Hindus.