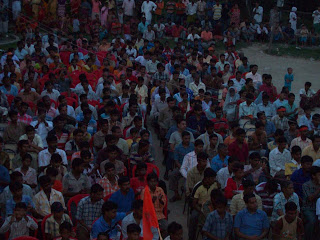 A grand success overlapped all the hurdles to hold a big Hindu public meeting in Nainanpur under Usthi PS (Police station) in South 24 Pgs ( West Bengal, India) where the Hindus became almost minority in the last few decades. Over one thousand Hindus converged into the venue of Nainanpur primary school ground from adjacent Kulpi, Mandirbazar, Magrahat I & II, Diamond Harbour I blocks on 15th November last to consolidate the Hindu solidarity in this Diamond Harbour Sub-Divisional Hindu Sammelan with a great enthusiasm and sensation.

The function was inaugurated with the Tarja Gan (solo vocal conversational Bengali song) by eminent TV & Radio artist Sushil Naskar ; Prokash Das, reputed journalist of SAMHATI SANGBAD delivered the inaugural speech as an emphatic start of the occasion. Amaresh Mukherjee, an eminent litterateur, artist and educationist described such spontaneous association of Hindu youths is a start of a new Hindu era. He also pointed out that the idealism of Shivaji and Swami Vivekananda can only lead the young force of Hindu Samhati in a right way. Swami Punyalokananda of Sri Ramakrishna Sarada Ashrama categorically told that Hindus should be sensitized more to protect their religion. If Hindus allow any kind of reluctance regarding the sorrow and sufferings of their Hindu neighbors, the plight of Hindus will naturally increase.

Tapan Ghosh, the President of Hindu samhati and the main attraction of the conference energized the gathering by describing the causes of plight and persecution of Hindus in many areas of South 24 Parganas. Sri Ghosh told that all the political parties like Congress, CPIM or Trinamool have to face a peril for their appeasement policy of Muslims and the Hindus have also to face same fate if they do not understand the reality of the situation. The Hindus of this area will have to leave their mother land like the uprooted Hindu refugees of East Bengal, out of this situation. He said that Buddhadev Bhattacharya, Shantimoy Bhattacharya, Mamata Banerjee, Tathagata Roy or Sougata Roy, all were compelled to leave Bangladesh, only for being Hindu. Do they want that present Hindus too transfer this land in the hands of Muslim fundamentalists again, like them forgetting all the interest and unity of Hindus here? Sri Ghosh urged the audiences to build a resistance force and a firm Hindu organisation everywhere.


The active Hindu organizer of the locality, Pratap Hazra aroused a huge sensation and greeted with a big clap by saying that those Hindus opposing Hindu organization are nothing but the enemies of Hindu people and the Hindus will not forgive then anyway. Sri Manthan Arya, Baridbaran Guha, Bimamn Chowdhury, Brojen Roy and Tapan Biswas were the distinguished guests and speakers in the meeting. Ramendranath Mondal, a renowned social worker of the locality presided over the meeting and conveyed his unconditional support to Hindu Samhati in every respect. Upananda Brahmachari conducted the entire programme enticing the varied threads of attractions efficiently. The participation of Hindu women in good numbers in this programme is obviously a remarkable feature in this event. 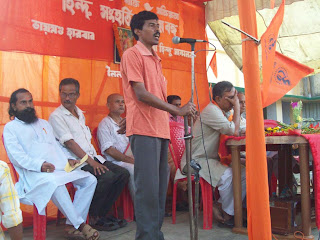 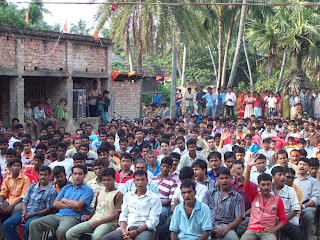 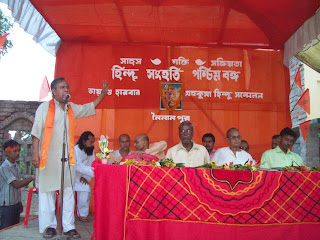 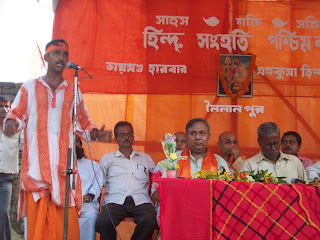 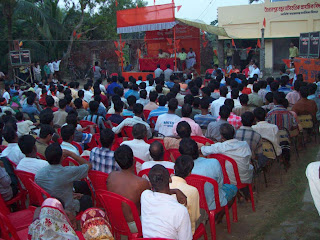 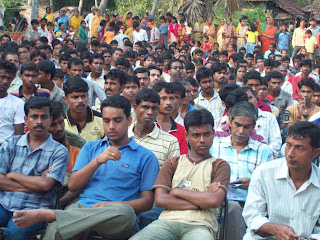