Creation of a New Pakistan in Barrackpore

December 01, 2009
Mosque to be Revived after 63 Years to enhance anti-Hindu activities in Barrackpore, West Bengal
An absolutely dilapidated mosque, named Bhanga Masjid, is situated in Ward no. 3 of Barrackpore town in North 24 Pargana district. It is just on the side of the main railway track of Sealdah – Krishnanagar line. In last 63 years, i.e., after independence, nobody offered Namaz in that mosque as there is no Muslim locality nearby. Before independence, some Muslims used to live here who migrated to Pakistan after partition.

In this Bhanga Masjid, a government primary school (Nabarun Vidyamandir) used to run since long time. In fact, all the aged persons of this area were taught in this school in their childhood. About 2 years back, that school became closed due to lack of students.

Adjacent to that dilapidated structure, a club named ‘Sankha Bharati’ is situated. It was established in 1951. It is a registered club with various activities of sports and culture. Within 1 kilometer radius of that spot, there is no Muslim locality/residence.

In the month of April this year, on one Friday before the Parliamentary Election, some Muslim activists came from distant places and tried to offer Namaz in that dilapidated structure. Local people sensing the mal-intents of these outsiders drove them away. Next Friday, Tarit Baran Topdar, the then local M.P. of CPI(M), came there with a few outsider members of a right-wing Muslim lobby group and his party cadres. Local people gathered there, Club members were there and police force from Barrackpur Police Station were also present. Topdar shouted in front of all, “ I am taking the charge of this Mosque. Muslims will offer Namaz here every Friday henceforth. I Challenge anyone and everyone to stop it.” Then he entered the structures leaving his shoes outside along with the Muslims. The police were mere spectators and the local people remained dumb-founded.
It is to be mentioned here that Tarit Topdar lives in the same ward no.3 of Barrackpore Town. And also to be mentioned here that Tarit Topdar himself a Refugee (forcefully evacuated from his homeland by Muslim extremists) whose birth place is Netrakona in Maimansing district of Bangladesh.
Since then, Muslims from distant places come here every Friday noon to offer Namaz. The local people sensing future troble made several representations to I.C. (Police), S.D.O. and District Magistrate and submitted memorandum with mass signature. Their demands are : (1) outsiders should not be allowed to come and offer Namaz as there is no precedence of it, (2) status quo should be maintained, (3) communal harmony should not be allowed to be disturbed. But all efforts were in vain. The S.D.O. misbehaved with the Hindu delegation and told that it is a mosque and he will not be able to stop the Namaz.
In the meantime, the number of the Namazis increased. Now it is 60-65. They come in scooters, motor-bikes and in a red Santro car. They intentionally try to disturb/irritate the local club and people.
By this time, Police officers came and threatened the club members that they will be responsible if any disturbance is reported by the Namazis.
On Friday 16th October, 2009, Tapan Ghosh, President of Hindu Samhati, visited the spot and met with the members of the ‘Sankha Bharati’ Club in the club room. The matter was discussed thoroughly. It is really a difficult situation. Club members are skeptic. Local CPIM cadres, although aggrieved but are spineless. Local people are very much tense but passive due to the fear of CPIM.
On Thursday 22nd October, 2009, members of a Muslim reactionary group came and fixed some cement made grills (Zaffri) in the dilapidated structure. In night, some unidentified persons broke those grills. Next day on Friday at about 11 am when the outsiders Muslims started to come, they saw the broken grills. They became agitated and went to Police station to complain. Police came. In its protection Friday Namaz was offered. Then again construction started by the Muslims in a big way under Police protection. On 24th October 2009,the construction work continued.
In the evening, a small scuffle occurred when one member of the club threw a cigarette end outside the club room. Consequently, the I.C. of Police Station came and asked the Muslims to complete the work within tonight and vacate the place. Police posting is there.
About one month ago, the Club contacted Hindu Samhati and sought help. Since then the local HS workers are fully active and taking initiative. The Club members are in close contact with the HS Central Committee. They acquired some courage, became a little hopeful and trying their best.
Jackie, a rich young Muslim is leading the operation of capturing the venue. He lives in Dhobighat area of the town, owns a private school, and reportedly a SIMI member. Earlier he used to be a ‘chamcha’, or yesman of Tarit Topdar, now became a chamcha of Dinesh Trivedi, newly elected Trinamool Congress M.P. of Barrackpore.
Two open public meetings were addressed by Tapan Ghosh : on 28th October, 2009- in front of Bhanga Masjid and on 22nd November 2009 at Lalkuthi near 15 no. Rail Gate. A leaflet was distributed in the first meeting condemning Tarit Topdar. 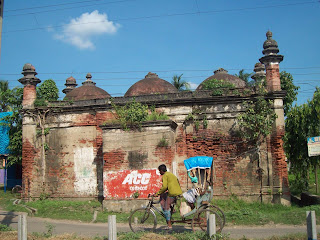 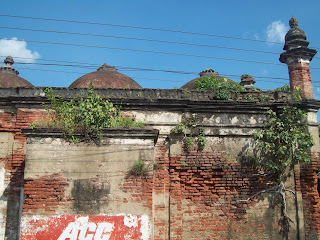 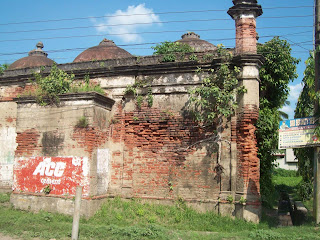 3. He ought to be sent where his Allah is sending Kafirs ( Non-Moslem Infidels ). This ought to be a happy contract agreement.

4. The least he ought to be given is: