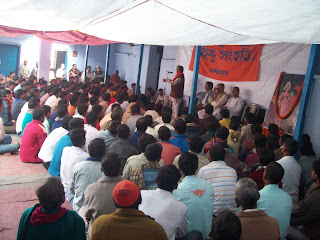 A two days State Conference of Hindu Samhati has been concluded in Kolkata on 26th and 27th of Dec 2009, very successfully. Over 230 delegates from 22 blocks covering 83 villages attended the meeting at Mundhra Dharmashala in the heart of the city, to chalk out the organizational strategy and plan for the next year programs, highlighting its 2nd anniversery on 14th February, 2010.
The program was inaugurated with lighting of earthen lamp by Durga Mukherjee and chanting Aum thrice by all. The dignitaries present offered flower petals in the picture of Bharat Mata amidst shouting of Bande Mataram, Bharat Mata ki Jai and Jai Sree Ram several times.
In the opening speech Tapan Ghosh, Presedent of Hindu Samhati presented the Bengal Scenario, tormented by the semitic thrust and the political hegemony. He described the situation of Bengali Hinds as worse than ever. He urged the Hindu Samhati members to keep keen vigil to the situation for conbating the evil forces in the Hindu Society including the secular political parties favoring the Muslims here only for The Vote Bank. Barid Baran Guha and Srimanthan Arya were the other dignitaries to address this session.
Upananda Brhamachari, Vice President of Hindu Samhati highlighted the concept of Practical Hindutva (as opposed to Hinduism misunderstood and underminded in the face of upsurging anti-hindu propaganda by others). There was a discussion forum among the delegates just before that. In the evenig an attractive video show was held upon different aspects and activities of Hindu Samhati.
In the very next day on 27th December, 2009 the schedule was opened with Yoga Class lead by Upananda Brahamachari. In the next session of discussion the delegates resoluted to observe the 2nd anniversery of Hindu Samhati on 14 February of 2010 in a very beffiting manner and ensured high attendance of the supporters of organization from all corners.
Dr. Radheshyam Brahmachari, Dr. Dipankar Pati, Amitava Ghosh, Rabindranath Dutta, Madanlal Sharma and Vijoy Saraff were also present in the conference to convey their support and well wishes for the success of Hindu Samhati.
Chittaranjan Dey, Secy. HS, Amal Bose and Prokash Das contributed their best for the success of this conference in many ways.
Posted by Hindu Samhati's International Communication Team.