December 26, 2010
Swami Sraddhananda spearheaded a successful Shuddhi movement to bring back converted Indian Muslims back to Hinduism. Converting back tens of thousands of Muslims (whose ancestors were forcibly converted to Islam from Hinduism) to their original Hindu faith, Swami-ji and the Arya Samaj movement is a major inspiration for Hindu Samhati.
It is a unfortunate that with the passage of time, we are losing the memory of the noble sons of India and one of them is surely Swami Sraddhananda. How many of us are familiar with the name of Swami Sraddhananda? He should have been one of the most revered personalities in the history of Indian freedom struggle and termed as one of the true liberators of the Hindu society as well. We draw vital inspirations from the life history of this venerated sage. 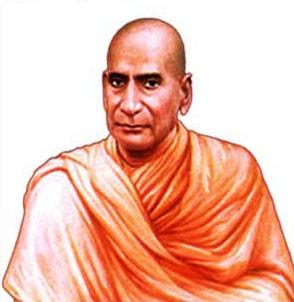 ..... We offer a million salutes to this Great Warrior-Saint of our community, and do prarthana that we will be guided by leaders like him for our future work.

To Read the Full Article on This Inspirational Personality, Please Visit:

Dibyajyoti said…
Public awareness,debate should be required on life of Swami Dayanand Saraswati,Shradhhananad, I was unaware of Shraddhanand before reading Samhati site. Satyartha Prakash by Dayanand Saraswati should be taught to the people in the public meeting by the Hindu organization. Ignorance of our own heritage,culture is our biggest enemy, not the Islam. If we can teach the people who we are and Hindu means Vasudaibo Kutumbakam no body can conquer us.
December 27, 2010 at 12:45 AM

HinduBengal said…
Reconersion of Muslims back to Hindutva fold is Great option if we want to live in peace in Bharatvarsha.

Hindus specially from West Bengal need to realise that Hindutva is a Cultural Nationalism less so Religious.

Secularism only destroys our Cultural pride and the worst form is Communism which is a foreign import into Bengali-Hindu Mind...

There's nothing Communal being a proud Hindu..
If the Islamic monsters who did "Deganga Riots" during 6 Sept 2010.
Escape Unarrested..
Then we really need to gear up to save our identity.
Ahimsa is NOT Hinduism
Karma, Bhakti and Gyan are.

We have forgotten "Karma"..
But we are seeing a slow resurgence of Hindutva in West Bengal Now
January 5, 2011 at 8:46 AM