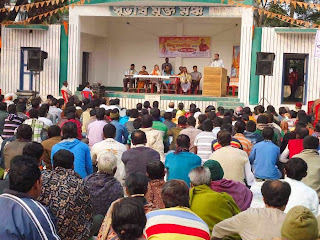 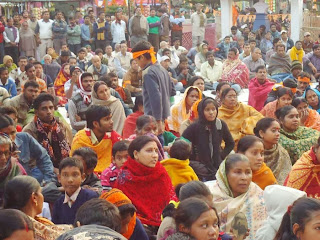 Speaking on the occasion, Sumana Chowdhury, editor of periodical “Tapoban”, censured the present scenario in Bengal remaining a mute spectator to mounting Hindu persecution altogether. She emphasized how incidents of cow-slaughter perturb Hindus and administration remains ever active to inhibit any anger among Hindus in this regard. Even if several luminaries in the town of Hasnabad, according to her, protested against cow-slaughter, vested interests of political parties and also their dream to enjoy a loyal minority vote bank have subdued protests of Hindus and who has failed to comply with this diktat, he has been ostracized.  She asked Hindus to get inspired by the ideals of Swami Vivekananda and come forward to uphold their religious identity. 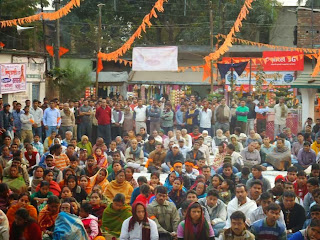 Narayan Chandra Ghosh, articulating his reverence to Swami Vivekananda, stated that the time has come when chanting “Vande Mataram” has become awful in Bengal and coordinated efforts of secularists to stamp down such nationalist thoughts reign supremely. Citing a few instances including how a Hindu van chanting “Hari Naam” was thrashed by a mob of Muslim youths two-year ago in the environs, he said that Islamic hegemony is rising stupendously but none except Hindu Samhati has the capability and also honest intention to challenge it. Krishnapada Karmakar and Brajendranath Ray also held similar views in their speeches. Mr. Ray stated with conviction whether it is the dreadful episode at Deganga in 2010 or the rape of innocent Shipra Ghosh at Kamduni, Barasat of late, all are part of greater plan to subjugate Hindus. 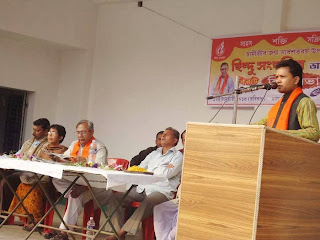 Bikana Naskar, while designating Hindu Samhati as a non-political organization and epitome of Kshatriya spirit, stated that despite myriad commemorations of Swami Vivekananda or The Cyclonic Monk of India on this day, his ideals had become the greatest casualty. While the revered Swami dedicated his life for ascension of Hindus in each manner, his original ideals have been replaced by a weird notion of secularism. Nowadays the venerated Swami is presented more as an adherent of secularism in India albeit he was proudest as a Hindu. Now the question before Hindus remains one – what to do and how to do. Rendering a meticulous analysis of the brutal reality for Hindus, he succinctly stated how Shahjahan Sheikh in Sandeshkhali in 24 Paraganas (South) district, once a cadre of CPIM but now in Trinamool Congress, has been unleashing a reign of terror on Hindus there. Citing a few horrific examples more, he asked the mob to come up, join Hindu Samhati and be strong Hindu to change the destiny. 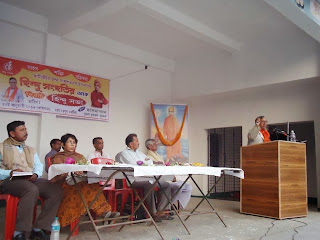 Tapan Ghosh (president – Hindu Samhati), while speaking to the crowd, said given that Swami Vivekananda and his life has been explained so diversely it’s no wonder if anyone considers Swami’s greatest emphasis was on health service. But Swami is simply peerless in the world history; he did what remains unthinkable to other Sannyasis – he sowed seeds of revolution in India to oust British Imperialism and all these led to the formation of revolutionary organizations in Bengal – Anushilan Samity and Jugantar and a band of fiery rebels ever-ready to sacrifice them at the altar of motherland. Such was his spirit that Aurobindo Ghosh came all the way from Baroda, became first Principal of Bengal National College that led to the formation of Jadavpur University in following decades. He, along with Sister Nivedita who is regarded as the emblem of Swami Vivekananda’s revolutionary thoughts, strengthened the saga of indigenous study and cause of revolution. The bomb hurled by Khudiram Basu rocked the basis of British rule in India. All these are instances of Swamiji’s influence that originated from his desire to break the shackles of bondage for Hindus yet he is considered as the progenitor of weird secularism in India. This is a rot since the need of religious harmony is felt only in Bengal but not in neighboring Bangladesh where Hindu persecution has been going on for decades. 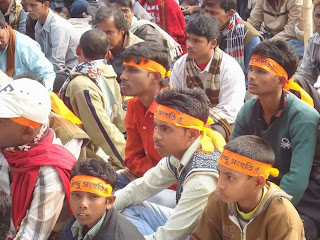 Mr. Ghosh went on explaining the current situation and explicated absence of bomb blasts in Kolkata while it has become a routine affair in the rest of India and the reason as per him, Kolkata is the best refuge for Islamic terrorists. Apart from citing a few examples of how the saga of Jihad is engrossing a particular minority community against Hindus in West Bengal, he also conferred Taki-Hasnabad as the sanctuary of Islamists in Bangladesh. Islamists from the neighboring country, after conducting acts of terror, come to this area for medical treatment and also to steer clear of Bangladeshi administration. But no opposition leader of contemporary state government censures this indulgence fearing loss of Muslim votes. Speaking on escalating cattle smuggling into Bangladesh, he mentioned the tragic developments in Swarupnagar of late where Hindus were thrashed by criminals from Bangladesh for protesting against this illegal trade.  Almost all districts in Bengal including 24 Paragnas (North and South), Nadia, Hooghly, Howrah, Midnapore are feeling the brunt of Islamic fundamentalism and the murder of Dipankar Ray from Bangoan, who dared to love and marry a Muslim girl, by the bride’s father and his accomplices in broad daylight makes the brutal reality prevailing Bengal most percipient. He concluded his speech by stating that Hindu Samhati is a non-political organization and has been created to institute a new destiny for persecuted Hindus. 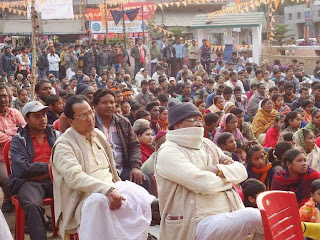 It is worthwhile to mention, Mr. Manas Ghosh, editor of Dainik Statesman, in an article penned by him and published in the esteemed daily on January 12, 2014, expresses without qualm that Hasnabad along with Barasat and Basirhat have become hubs for Jamaat cadres and other Muslim terrorists from Bangladesh. Following each act of arson in Bangladesh and to get proper treatment along with shelter, they take refuge in these places and in this case, they are helped by a large network of Muslim refugees from India to Bangladesh hell-bent to avenge their transportation. This network maintains rapport with several representatives of the existing ruling clique in West Bengal.