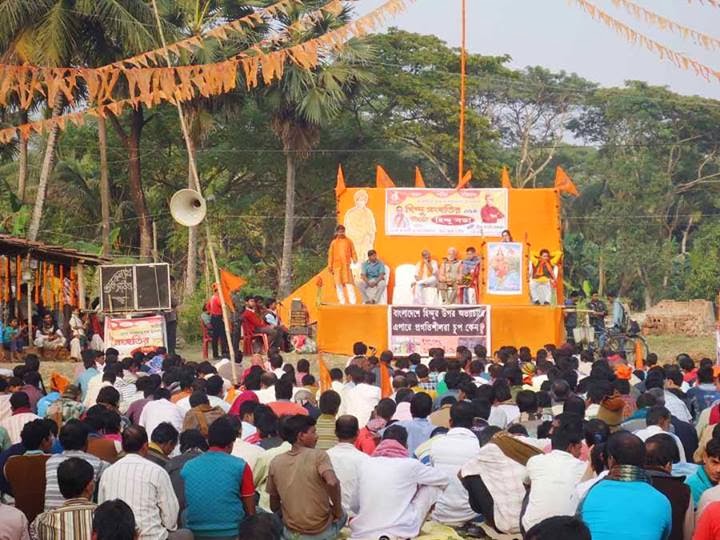 On January 19, 2014, as a part of its programs to commemorate 150 th birth anniversary of Swami Vivekananda, Hindu Samhati organized a public meeting at the Hindu Samhati Maidan at Jiban Mandaler Hat within the block of Joynagar in the district of South 24 Parganas. The meeting was joined by people in strength and with great enthusiasm. The public meeting was embellished by the presence and speeches of Tapan Ghosh (president, Hindu Samhati), Bikarna Naskar, Sourav Sasmal, Santanu Basak, Sanjay Sardar and others. 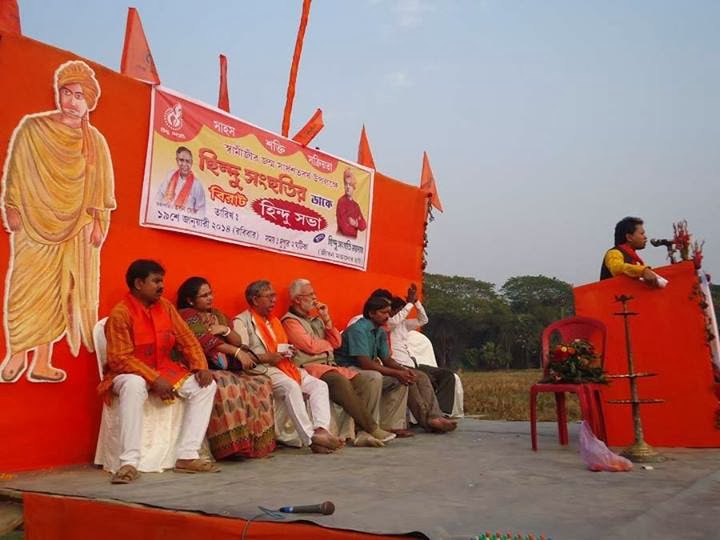 While several speakers, citing many ominous episodes, cautioned Hindus of the imminent danger and also accentuated the need of Hindu unity, Bikarna Naskar commenced his speech through the portrayal of brutality against Hindus in the state. The depiction of Hindu persecution at Naliakhali in Canning on February 19, 2013 shocked the gathering. He also went on describing harrowing incidents of bashing Hindus and how this precarious strategy has been expanding its sinister tentacles across the state. Bikarna Naskar also recounted the tragic incident of Krishna Banik in Kaltala nearby and how this innocent Hindu girl was outraged by minority students before her husband. But police declined to recognize this outrageous incident fearing political pressure. The excruciating incident of attacking Hindus at Sandeshkhali and Sarberia while returning from Kolkata on August 16, 2013 and the role of vicious kingpins including Shahjahan Sheikh and Shahjahan Gazi in this context were also found in his scathing speech. On the word of him, due to wild assaults 23 houses of Hindus were burnt down while Sulata Ghosh, a Hindu housewife in the village, was literally molested by a group of attackers (Muslim by religion) and was left with one garment only. Tapas Naskar, an impeccant Hindu youth in the locality, was shot leading to a reign of terror. He also mentioned the spate in religious violence against Hindus of late and the wave of onslaughts at Panchla in Howrah due to celebration of Viswa Navi Divas or World Navi Day on January 14, 2014. Terming the madrasa education as the gravest source behind mounting Jihadi terrorism in the globe, he asked Muslims to send their wards to government’s schools for a better education and life. 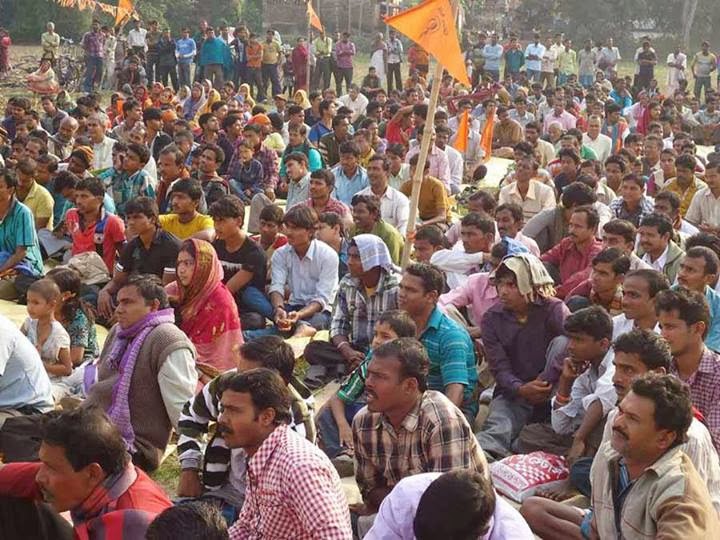 Bikarna Naskar also censured the euphoria of Hindu-Muslim harmony severely and dubbed it as a fantastic ploy to hoodwink Hindus altogether. In his support, he cited several references of Dr. Zakir Naik, well-known Muslim theologian and televangelist, where the Islamic pundit had stated clearly of the supremacy of Islam worldwide and thus negated any equality between Hinduism and Islam. He ended his speech by inviting all to the upcoming annual anniversary of Hindu Samhati on February 14 in Kolkata. 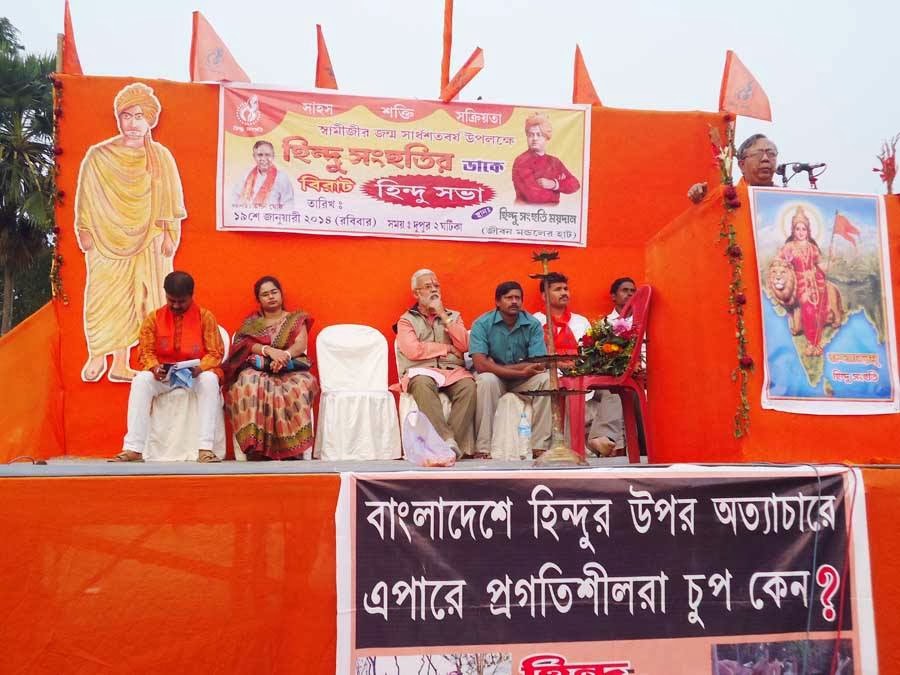 Tapan Ghosh initiated his speech by describing briefly Practical Vedanta as contrived by Swami Vivekananda and also how the same has been defiled through the saga of social service. He explained that social service had never been the ideal of Swami. It had been commenced by Swami Akhandananda at Sargachi, the first branch center of Ramakrishna Mission, in the district of Murshidabad. The initiative earned high appreciation of his fellow disciple Swami Vivekananda but he never participated in any such activity. The principal mantra in his life was Advaita Vedanta but his plans for India were different. This view manifested best during his short visit to Dhaka in 1901. A few Bengali Hindu youths visited him and his spine-tingling influence helped them to initiate a new chapter in Indian history – revolutionary movement in Bengal through two premier organizations, Anushilan Samiti and Jugantar. These two epochal groups rocked the foundation of British Empire. Revolutionaries used to keep Srimad Bhagavad Gita and Swadesh Chinta by Swami Vivekananda simultaneously. All these prove that Swamiji’s thrust was the gospel of sacrifice and not social service.  But glaring sacrifices of revolutionaries couldn’t preclude the ill-fated partition that happened to gratify demands of Muslims despite remaining absent in the national freedom movement. In pre-1947 Bengal, Muslims comprised 54% of the population while Hindus formed the remaining 46% but none can distinguish names of 5 Muslim revolutionaries even. But there is no end to demands of reservations for Muslims these days; albeit there have been many already, new demands are in full action. Muslims enjoy 100% reservations in neighboring Bangladesh but their lust for more never ends and hence, Bengal is the target. 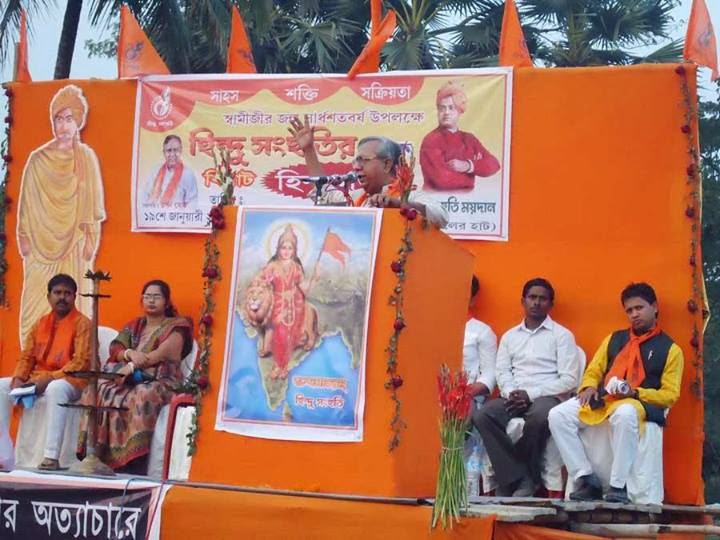 Criminating nefarious roles of secular leaders who fled Bangladesh (then East Pakistan) for lives including Jyoti Basu, Sibdas Ghosh and Mamata Banerjee, Tapan Ghosh explicated the mounting peril for Hindus and in this context, he cited the Hindu persecution at nearby Dhaki Bazar in Kultali where almost 70 shops of Hindus were captured by Muslim fanatics on January 1, 2014. Bengal government had announced Rs. 2 lakh as compensation for each Muslim individual who died in hooch tragedy in 2011 but in this case it remained secretive. he also noted the difference between madrasas, mosques and temples. While the former institutions remain proactive always and leave no stone unturned to exploit any issue for own advantage, Hindu institutions, under the auspices of fake Vaishnavas, remain despicable. According to him, these Vaishnavas are the greatest curse to Hindu Dharma; their iniquity mislead Hindus or else Lord Krishna, known for extinguishing his opponents including Kansa, Shisuhpala, would not have been worshipped as an embodiment of peace and tranquility only. In this way, they are disrespecting ideals of Sri Sri Chaitanya Mahaprabhu or emblem of Hindu aspirations to wrest freedom from Islamic clutches as well.

He reminded Hindus the necessity to struggle or they would become refugees once more and there is no free terrain for them. Tapan Ghosh ended the speech by inviting Hindus to the forthcoming rally of Hindu Samhati on February 14 in Kolkata.

malathi said…
God Bless Hindu Samhati for taking care of unfortunate Hindu of the state. I hope there is a ray of sun shine or hope for them for all the suffering they going through.
January 21, 2014 at 6:03 PM