March 08, 2015
Exposing the myth of Sher Shah's constructing G. T. Road from Dhaka to Multan, a stretch of 4800 km. In this case our historians' sycophancy of Muslim rulers crossed all limits. 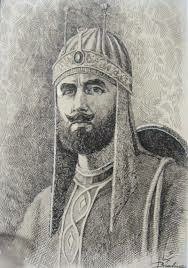 The history books tell that Sher Shah ascended the throne of Delhi on May 17, 1540, by defeating Humayun in a battle near Kannauj and in the same year organised a military campaign to suppress the revolt of the Gakkars in Punjab . He moved east, the next year, to suppress a similar revolt in Bengal in March, 1541 AD. The next year, he moved against the Rajput kings in central India and conquered Malwa. The very next year (i.e. in 1543 AD), he organised a campaign against the Hindu king Puran Mal and took control of the fort at Raisin and then moved against the Rajput king of Marwar. In 1544 he subdued the Rathore king, Maldev and in the subsequent year, he died in an accident in 1545 AD, in Kalinjar.

So, the rule of Sher Shah lasted only for five years and out of these five years, he spent nearly one year to gain control over the fort of Kalinjore.[6] During the rest of his reign, he was on hectic movement from east to west and north to south for suppressing revolts or conquering new forts. It should be mentioned here that the period under consideration was a period of political chaos and lawlessness and to restore order, Sher Shah had to fight many battles and that too with partial success. Thus the question naturally arises-Was it possible for Sher Shah (or any other ruler of that time) to build such long roads within such a short span of time? Furthermore, is it possible to make roads, nearly 6,240 Km long, today using modern technology, within a period of 4 or 5 years? The real story is that, Abbas Khan, a court-chronicler of Sher Shah had written some lies to please and glorify his master and our historians took those narrations at their face value, without applying their common sense to estimate the credibility of those blatant lies.

A close scrutiny of events, during the time of Sher Shah, also reveals that, despite his vast efforts, he did not succeed in bringing the vast stretch of land, from Dhaka in Bengal and River Indus in Punjab , under his control. So, how could Sher Shah carry out such a gigantic project like making a road from Bengal to Punjab , when the territory in question was not under his supreme control?

A Muslim chronicler, Sheikh Nurul Haque, most probably honest, who mentioned in his Zubdatut Tawarikh, the road-building endeavour of Sher Shah, and wrote, "Sher Shah made the road which now runs from Delhi to Agra, by cutting trees in jungles, removing obstacles and built serais. Before that time people had to travel through the doab between these two places."[7] This description seems plausible and Sher Shah could have built a road, 300 Km long, within his reign of 4 years. It is important to note that this chronicler did not mention a single word about building a road from Bengal to Punjab by Sher Shah.