March 22, 2015
On March 18 2015, newly appointed Prant Karyavah (State Secretary) of South Bengal Sri Jishnu Basu addressed a press conference at RSS office at Kolkata. Not many paper/media covered it. But "Ei Samay", the Bengali newspaper of TOI group, published a 2 column report today. According to this report, RSS going to start a Post-Card campaign targeting Muslim youths, to change it's image among them. By printed message on these postcards, RSS will make a serious effort to convince the Muslim youths that RSS is not anti Muslim and not against any other religions.


I FAIL TO UNDERSTAND WHAT RSS ACTUALLY WANTS TO ACHIEVE BY THIS!

My question to W Bengal RSS :

(2) Should it be a priority for RSS in a border state like West Bengal with 30% Muslim population?

(3) Will it help the persecuted Hindus in Muslim dominated areas of rural Bengal to get rid of many types of tortures inflicted upon them by the fanatic Muslims?

(4) Will it not confuse the tortured Hindus more?

(5) Will it stop Hindu migration from many border areas?

(6) Will these post cards really be able to take out the Muslims from the influence of Masjid & Madrasas?

(7) Is not RSS aware of the large number of incidents of Hindu persecution everyday in innumerable places of rural Bengal?

(8) Does not RSS know the incidents of massive tortures/large scale violence upon Hindus by Muslims in the very district (South 24 Parganas) of Sri Jishnu Basu, e.g, Rupnagar-Taranagar (2012), Canning-Naliakhali (2013), Usthi (2015)?

(9) Is there any effort on the part of RSS to create any Hindu resistance in W Bengal?

(10) Does RSS feel at all any necessity of Hindu resistance in state like W Bengal?

(11) Does not RSS see any danger of another partition of West Bengal by the Islamic separatist tendency?

(12) Is RSS at all concerned about the safety, security and honour of defenseless ordinary Hindu people in rural areas? 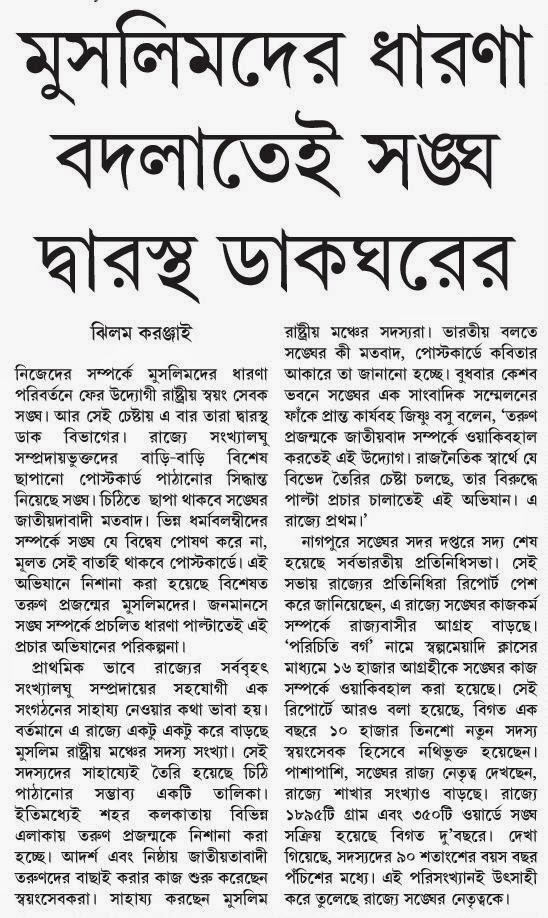