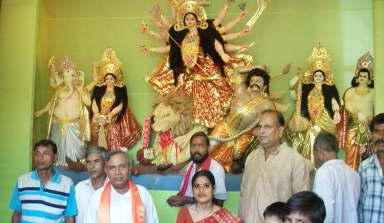 Muslim activists made all efforts last year to thwart the 26-year old Durga Puja of Shovarani Athletic Club of Village: Dakshin Marjada, PS: Mograhat, District: S 24 Parganas, West Bengal state in India. But this is not the only problem claimed by them. A burial ground that exists alongside the club and has stimulated the Muslims to claim that the club is also on the same land. As a part of this claim they put up a massive gate to commemorate Eid (just in front of the Puja pandal) and their intention was to retain the status quo. The Hindus were not willing to accept this gross injustice and this led to commotion in the neighborhood. Tapan Ghosh, president of Hindu Samhati visited the hot spot after Muslims were attempting to pull down the entire structure of the pandal(Hindu altar).

The situation alarmed the Hindus and they after witnessing the obnoxious efforts of the local Muslims, also started reorganizing themselves. They have taken serious lessons from the events in Deganga and are equipped to repel any attack at any time from the Islamists. One of the best specimens of this changed frame of mind is the rising graph of Hindu Samhati in Mograhat and adjoining PS: Usthi. For these reasons, in the meeting Maulanas (Muslim preachers) were found commenting that they would cooperate with the Hindus in the celebration of the Hindu religious Puja.

To read the full report, please visit the links below: