The havoc resulting from bomb blast has returned to once more with the blast in , its national capital, taking place today itself around 10.15 am. The blast reportedly took place outside Gate No. 5 of the Delhi High Court leading to a complete mayhem in the environs. What was the heaven of attorneys in black coats, busy in talking with others and certainly litigants till a few moments back turned into a necropolis; a vast tract of land filled with blood and witnessing screams for help. The death toll has risen to 12 while 60 heavily injured (some are even at stake) people have been rushed to , and All India Institute of Medical Sciences.

It has also come to the knowledge, dreaded Pakistan-based terror outfit Harkat-ul-Jihad-al-Islami (HUJI ) has claimed responsibility by sending an email.

What’s next then? We are not sure since there has hardly been any breakthrough regarding three serial blasts that rocked Mumbai, financial capital of , on July 13, 2011, yet. The three blasts, one after the other, were timed at 6.30 pm, 6.45 pm, and 7 pm IST, and targeted in that order Zaveri Bazaar, Opera House and the Kabutarkhana area of Dadar West.

Without doubt, number of this blast case will be following to Mumbai; hence, those who have evaded the specter of death this time can go to their homes and relax with other family members like us. We know that in these cases are of less significance, not to speak of ever-terrified countrymen. Had one of the casualties been member of political (read regal) class, there could have been some movement.

Whatever it is, blame game and unanimous condemnation of this dastardly act cutting across party lines, devoid of wasting a single moment, have started. Both Prime Minister and Home Minister have condemned this ghastly act.

V. K. Malhotra, senior leader of BJP, stated, “For the past so many days, it was in the news that is the main target of terrorists. It is a matter of great concern and a major mistake. It is essential to tighten up the security of the country to guard the public.”

Abhishek Manu Singhvi, leader of Congress, said, “This is a terrible tragic incident. I have no words to express my sorrow for the innocent people who died and got injured in the blast. Lawyers and judges should sit together and discuss the nitty gritty of this mishap.” Similar views came from others too.

So by now we have got the entire story. What else can be done other than swallowing the same? Blasts at regular intervals have become almost familiar to and the Indian government, an ideal emblem of pusillanimity, will surely manifest its lackluster stance once more. What can be done?

It’s for people like us to comprehend; to opt for between a crumbling democracy and a strong, virile polity that never fears to call a spade a spade. And this is the sole factor weakening steadily. Neither HUJI nor its fave comrade, Indian Mujahideen, is unknown to the Indian administration and intelligence. These two are incriminated in almost all blasts of late. Some of these are serial blasts in Uttar Pradesh, 23 November, 2007; Jaipur bombings, May 13, 2008; bombing, 2010; Mumbai serial blasts, 13 July, 2011 and others. What has been ’s success in nabbing these people and nipping their activities in the bud? Silence is the best answer.

Fate of blast will not be any different and it will die down gradually, like the preceding ones, and will get some exposure yet again with the advent of a new blast. What’s of Hindu lives then? Two things are clear – either Hindus have to go on counting on Indian administration and civil order or have to build their own fate. They have to trust in one and only principle – “it is human to forgive and forget; it is divine to resist and repay.”

hy is this said so? Whatever is the Indian story and its sorrow, the reality is something else – this is a bestial aggression against Hindus in by those who are keen to figure out the unsolved subjects of partition. Islamic hardliners, both from (aided by Islamic Ummah) and indigenous groups, are confident that Hindus, thanks to their lack of concern and passive attitudes, can be cowed and maimed easily; series of blasts is best for such cowards. Here is an anecdote from "Quran" 9:29 - Kill the non-Muslim Kafirs till they accept the religion of truth (Islam) or pay tribute by hand, being inferior".

If Hindus fail to act now, the day is not far when the entire community will turn into a new edition of Vietcong. Hindus have got to reconsider its own position and future, if there is any. 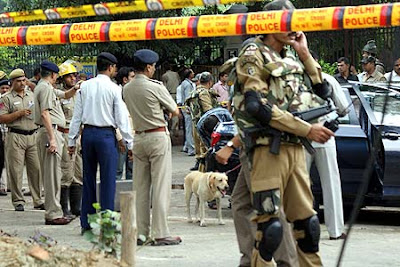