Hindu Samhati has its own notion of Durga Puja – it considers the Goddess (Devi Durga) as the ultimate epitome of power and energy that has been ever functional to make goodness overwhelm evil - Ya devi sarvabhuteshu sakti – rupena samsthita, Namas tasyai, Namas tasyai, Namas tasyai namo namah (To that Goddess who abides in all beings as power : Sautaions to Thee, …) and hence, desires that all Hindus must invoke Goddess Durga in new dresses.

With this end in view, Tapan Ghosh, president of Hindu Samhati, is leaving no stone unturned to make HS notion a success – through distributing clothes among impoverished Hindu tribal and SC families.

How it is going on and has been appreciated is found in the following pictures – of Chaital Adivasi Para, Basirhat subdivision, Dist. – 24 Paraganas (North), an extremely underdeveloped area. It feels great to state that 65 young girls of Chaital Adivasi Para were given new clothes (Churidar) in the Chaital High School.

This is not the end – more such programs of Hindu Samhati are unabated in other parts of . 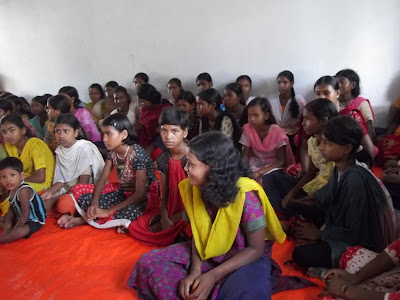 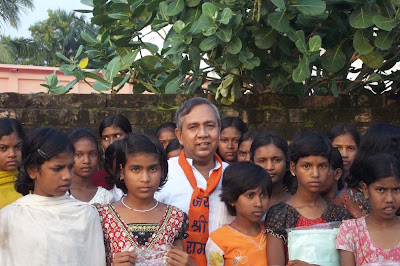