June 18, 2012
It is said that rare events, competent enough to change the course of history, do happen rarely in a life and the recently concluded All India Hindu Convention for Establishment of the Hindu Rashtra at Ramnathi, Ponda, in the Indian state of , merits the same status, if not more. All these are said since the Hindu movement in the Indian scenario will never remain the same henceforth and as per experts, the earlier approaches (termed as moribund by both its admirers and adversaries), will get lively, thanks to the convention, and would Hinduise politics more successfully than ever before.

The convention took place between June 10 and 15 and was convened by Hindu Janajagruti Samiti.

The grand conference was attended by Hindus from all walks of life including sages, Dharmacharyas, leaders and intellectuals representing 18 states in the realm of . Dignitaries who stole the attention of all through sharing their own experiences and hardest struggles waged in different parts of India to preserve and uphold Hindu interest included Tapan Ghosh, president of ‘Hindu Samhati’, Bengal, Pramod Mutalik, Sanjeev Punalekar, president of Shriram Sena, Arjun Sampat  of ‘Hindu Makkal Kachhi’.

Each and every leader was found to focus on an assortment of issues; however, there was a consensus among them as regards one matter – it’s high time for Hindus to rise to the occasion and turn to a Hindu Rashtra.

A choice of brawny speeches of Tapan Ghosh earned strong approvals from people gathered on the occasion and brought before the Hindu society a new direction. Mr. Ghosh’s views of establishing a Hindu Rashtra were corroborated by Sanatan Sanstha with a number of media agencies in .

The historic convention was marked by a few other developments as well. Proposals condemning distortion of history of , extensive nationalization of Hindu temples to lootHindu  funds there, inactivity of government to put an end to recurrent Hindu persecution in both Kashmir and were adopted with wholehearted support. 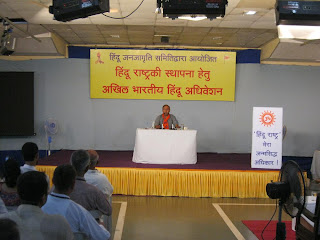 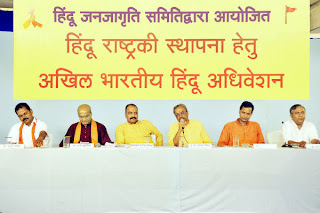