May 15, 2013
Midnapore district of West Bengal has always been in the forefront of revolutionary movements for centuries against any kind of oppression and discrimination, suddenly found itself in spot where its own identity is in stake.

It is reported that on 12/05/2013 at around 9:00 PM, some boys from Goyla Para were  gossiping by the roadside near Keranitola on their motorcycles, suddenly a large container truck came in high speed, after delivering motorcycles to a nearby shop Palco Motors, and hit one of the boys. That made the boys furious and they stopped the truck and demanded an apology from the driver. The driver allegedly refused to tender any apology and rather started using abusive language against the boys. This made the boys hostile and they broke the headlamp of the truck. Hearing the chaos, a group of people came out from the Dewan Sporting Club – which regularly receives huge fund from the proprietor of Palco Motors, situated just opposite to the incident. The club secretary Shaikh Laltu and Shaikh Tulu came to the spot immediately along with other boys and started beating the boys. They also started pelting stones towards them. Some brickbats thrown by the club members hit the mazar nearby resulting some damage into it. Then they accused the Hindu boys for desecrating the mazar and attacked the Kali Temple beside the road. They kicked at the idol, destroyed it and started playing with broken idol. Hindu boys from Goyla Para could not tolerate it anymore. They called other people from their area and pounced on them. Allegedly they also attacked the mosque and mazar and damaged its properties. Once, they were gaining the control over the situation, the administration called for RAF from Salua and Sec 144 was imposed.

The situation is still very tensed in the area. Hindus, in the area, are fuming for revenge. It is reported that even RAF personnel are offering them moral support. Local MLA Mrigen Maity and former commissioner Nazim Ahmed have reached the place and appealed for maintaining peace & communal harmony. 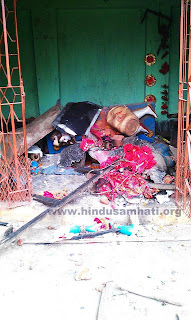