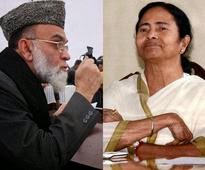 Whilst the Lok Sabha election is round the corner and electoral propaganda and counter-propaganda are in high spirits, Islamists have hit the jackpot once more with the chance (or premeditated?) meeting of Sonia Gandhi with Syed Ahmed Bukhari, Shahi Imam of Jama Masjid. The fallout has also been impressive as the venerated Muslim leader in India has come out with several Islamic clerics to support Congress and better its prospects among Muslims in the country – perhaps the most brazen paradigm of religious polarization in the country ever since 1947. Well, Congress is not alone; Shahi Imam has also asked Muslims to vote for Trinamool Congress in Bengal and the Rashtriya Janata Dal in Bihar en masse. Both of these parties have been deemed as best custodians of Muslim interest in the country. The annunciation fails to amaze anyone as scores of factors have helped the reigning Trinamool Congress in Bengal to earn this grandiloquent certificate.


Ever since the ascension of Trinamool Congress-led governance in the state, Hindu persecutions have risen by leaps and bounds and in almost all cases, the administration has been found to side against the Hindu victims. Be it the gruesome incidents at Taranagar and Rupnagar villages in 2012 where Hindu residences were burnt down exploiting the murder of a Muslim individual or the inhuman tortures on Hindus in the village of Naliakhali at Canning 2013 by irate Muslim mobs or the gang-rape and murder of a Hindu college student by Muslim ruffians at Kamduni near Barasat, the administration has always been found as an indifferent bystander and ever ready to hush up any accusations against radical Muslims, hell-bent to harm Hindus anyhow. The malice is no more limited to any part of the state but has spread everywhere making Bengal reach a period of uncertainty when a single detonation of religious passion is enough to despoil the basis of religious coexistence and also harmony. The incendiary rhetoric of Islamists found against Hindus every so often is also overlooked by the administration for its own benefit.

Besides, lots of reports revealed of late corroborate that the state has become the greatest storage of arms of Islamists. While Bardhaman have become its new storage, demography and proximity of the districts of 24 Paraganas (North and South) and Murshidabad to the India-Bangladesh international border have made these places ideal refuges to stockpile illegal arms and also to operatives of banned radical Muslim outfits including IM (Indian Mujahideen) and SIMI (Students Islamic Movement of India). If truth be told, the whole of Jammat-e-Islami leadership of Bangladesh took refuge in Bengal due to recent upheaval at Shahbag Dhaka demanding capital punishment of Abdul Quader Mullah, prime accused in crimes against humanity during the war of liberation of Bangladesh in 1971. It has been learnt, Hasnabad within Basirhat subdivision in North 24 Paraganas district happens to be their refuge and Muslim refugees from India to Bangladesh act as their vanguards. 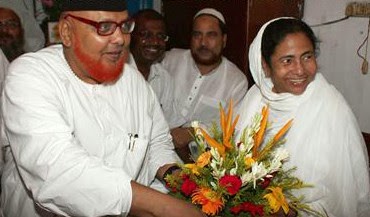 And even if Trinamool had missed the blessing of Shahi Imam, it had nothing to worry as Maulana Nurur Rahman Barkati, Shahi Imam of the Tipu Sultan Masjid in Kolkata, never looses words to eulogize Mamata Banerjee’s role in retaining the chastity of secularism or defending Islamists’ interests in every capacity. While talking to the press and media of late, he stated in public, “Mamata is born from the womb of secularism and so I support her. I have told her to speak against fascist forces, and she is doing it."