September 09, 2010
September 9, 2010
------------------------
Today no attacks or untoward incidents happened in Deganga.
Yesterday (September 8th) more police reinforcements were there and more raids by the police were conducted in the Muslim villages (the source of the attacks for the last few days). Nine Muslim activists were arrested. They were denied bail by the Barasat court, due to the seious nature of their conviction.
Today (September 9th), police arrested fours Hindu youths of Deganga - Lab Kumar Das, Kush Kumar Das, Gopal Das, Gopal Das (brothers, and sons of Parimal Das), and Chana Banik (son of Anukul Banik). They all got immediate bail from Barasat Court. Advocate Satyabrata Sen, a prominent lawyer in that court represented them. There are a group of very active Hindu Samhati supporters among the lawyers in Barasat Court.
Yesterday evening (August 8th) Tathagata Roy visited Deganga. His visit was followed visits by 3 state ministers. They declared compensation for the Hindu victims, etc. Today BJP MPs Chandan Mitra and Uday SIngh visited the area, accompanied by BJP state leaders Rahul Sinha and Samir Bhattacharya.
Pictures and videos were not available due to the severe curfew. However, our investigations team is collecting pictures of the events of the last few days. 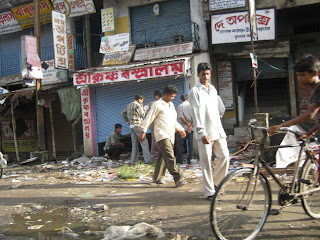 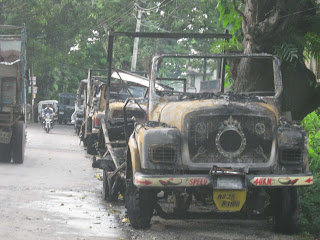 On August 8th Hindu Samhati organized protest meetings in many places. There were road blockages by HS supporters at two location in Barasat. Samhati President Tapan Ghosh attended a rally in Baguihati.
On August 9th, Hindu Samhati organized successful 'Rail Roko' (Block Rails) at two places one in Thakurnagar on Sealdah-Bangaon Route, and the other at Canning Station on Sealdah-Canning Route. There was massive participation in both the events.
At both the places police / rail police tried to intervene and stop the protesters, but could not succeed. Later, one Officer named KM Siraj (a Muslim) of Sonarpur RPF Police Station (Sealdah SOuth Section) interrogated and tried to intimidate Hindu Samhati's Canning Unit in-charge, Dinabandhu Gharami. We have unconfirmed reports that Mr. Gharami and three HS workers have been charged with a case.
PICTURES OF PROTESTS below 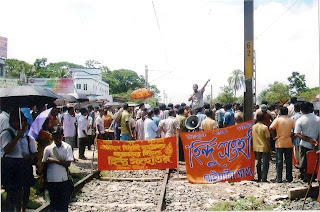 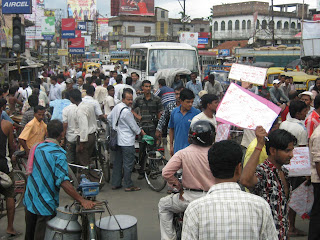 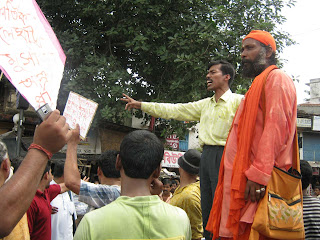 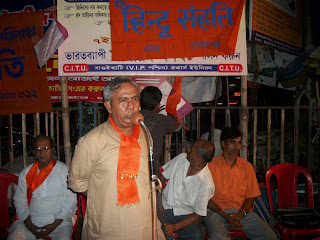 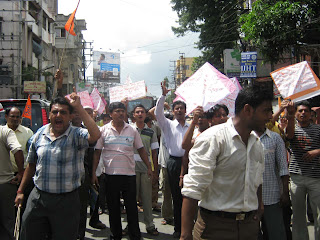 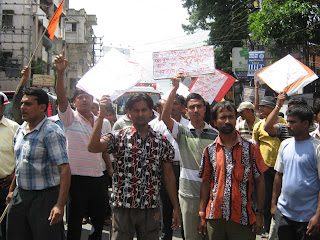 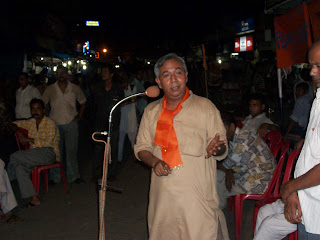 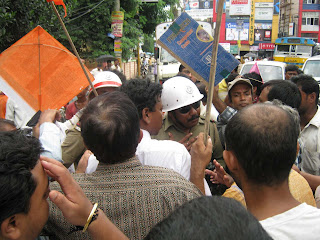 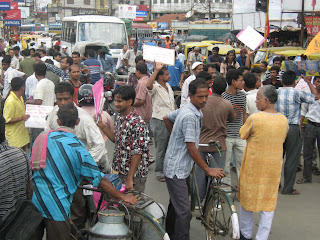 Anonymous said…
please call a Bengal bandh on the issue........hundreds of hindu youths will b supporting you....it should catch the eye of print and electronic media.....i feel there should be a pro hindu news channel in west bengal.....PLEASE CALL A BENGAL BUNDH......
September 10, 2010 at 1:31 PM

Unknown said…
"Bangal Bandh" is not the way to solve this kind of Violante.
we have to pressure our politician, Government or Social bodies to stop this type of illegal activities.
September 11, 2010 at 8:47 AM

Partha said…
Today some Learned Advocates of Barasat Judge's Court handed over some relief materials and money to victims of Deganga. They committed to help more if required.
September 11, 2010 at 2:06 PM

Anonymous said…
Yesterday Kashmir, today Bengal and tomorrow the rest of Bharat. Wake up Hindus, no other country will accept you
September 12, 2010 at 2:01 AM

NAYAK said…
STOP ALL TREDE WITH THE KILLER COMMUNITY LET THEM DIE OF HUNGER DON'T SUPPORT ANY FINANCIAL HELP
September 12, 2010 at 4:15 AM

Avijit said…
Hindus should retaliate.How long will we tolerate this atrocities of bastard muslims's torture?
September 12, 2010 at 11:29 AM

Unknown said…
we should make a serious step, we should raise the issue in the parliament, Chidambaram should visit deganga,It will be better if Adbaniji visits there, there will be huge media attention,we should ask for a clarification from MAMATA BANARJEE.
September 14, 2010 at 2:04 AM

Esl Experience said…
IT SHOULD SHAMEFUL TO HINDU'S CHARACTER!
SO,DO WITH OUT THINK BENEFITS....
FROM-ARBOC
September 16, 2010 at 4:26 AM