Shame on the Bengali Print and Electronic Media.

To save its Madrassa educated leader and M.P. Haji Nurul Islam, Trinamool Congress is now trying to give the Deganga atrocities a political colour. We want to make all aware about the Mamata's suicidal gameplan to appease the Muslims and to deceive the Hindus to win the forthcoming election. It is the same reprehensible strategy which CPI(M) has been following so far and made West Bengal a breeding ground for the Islamic expansionists.

It should be noted that when two political delegation teams went to visit Deganga on 8th and 9th Sept, all Hindus, especially the women cutting across party lines complained that Haji Nurul Islam is the main person behind these atrocities on Hindus.

In West Bengal, there is a peculiar self censorship among the media which is nothing but cowardice. Here, atrocities upon Hindus by the fanatic Muslims are always suppressed by the media. Therefore, in spite of the fact that the situation was so serious that the Army had to be called in, the reports are being suppressed and/or distorted. The cowards of the media do not consider it their duty to inform the people why the Army had to be called in.

In this situation, the most insignificant website : www.hindusamhati.org or,www.hindusamhati.blogspot.com did its humble duty to tell the world about the atrocities on Hindus in Deganga. The world responded and the hapless Hindus of Deganga got some relief. Otherwise on Tuesday (7th Sept) night, perhaps no Hindu women could save their honour.

The media in West Bengal, particularly the Bengali-language media, both print and electronic, have behaved in an unspeakable manner about the Deganga affair. On 8th September Prof. Tathagata Roy, member BJP National Executive, and ex-President, BJP West Bengal visited Deganga, took in the situation, conferred with Inspector-General of Police Mr. Sanjoy Mukherjee and Superintendent of Police for the district Mr. Rahul Srivastava (who were both camping at Deganga) and spoke to L.K.Advani over phone who in turn spoke to Chidambaram. One Captain Singhal of the army was also present during the meeting. The next day, Sept 9, BJP MPs Chandan Mitra and Uday Singh visited Deganga with Prof. Roy and had a more detailed inspection and conference with Mr. Sanjoy Mukherjee and Mr. Rahul Srivastava. All the people whom the team interviewed on the 9th Sept, unequivocally said that the entire affair had been engineered by Haji Nurul Islam, the Trinamool MP from Basirhat.

Yet, very few of the mainstream media, especially the Bengali media were present when the MPs called a press meet at NSCBI Airport, Kolkata, on 8th after their return from Deganga. Today oneBengali daily from Kolkata “Dainik Statesman” has printed a completely warped version of the entire affair which practically repeats what Haji Nurul wants to say. This paper has also abused the North America based correspondents who have expressed their anxiety and compassion about the Hindus of Deganga. The English language media has been slightly better, but only slightly. The Indian Express has been the a little truthful.

Shame on the Bengali media, both print and electronic.

They must know that they are responsible for the atrocities on Hindus, for looting of 500 Hindu houses and shops, for destruction of 5 Hindu temples and dishonouring of Hindu women.

More, much more damage would be done if this website had not published the report of the atrocities in time.

So, “Dainik Statesman” should be warned that they must not increase their sin by blaming this website. Hindus will not pardon it and its circulation will be surely affected. 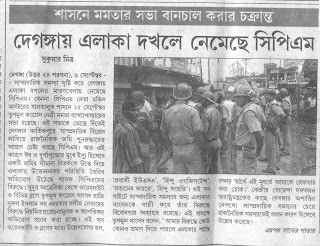 veerar said…
You are doing a fantastic service to the oppressed, Hindu community. Congrats and keep it up.I have added you to my links and am following daily.Thanks once again!
September 10, 2010 at 12:53 PM

Unknown said…
WE WANT HINDUS FROM ALL PARTS OF BHARAT INCLUDING BENGAL N MARCH ON THOSE PPL AS IF WE NEED TO SURVIVE WE LL HV TO START FULL FLEDGED FIGHT WWITH THE CRIMINALS WHO DEFAMED OUR GALS N GOD
September 10, 2010 at 2:33 PM

Anonymous said…
I am not sure that Indian Express did a great job. Actually the entire media except Daily Pioneer must be ashamed of themselves.

The way they have conducted themselves can never be pardoned.

Look at Times of India and its coverage. It is any thing but appropriate and humane.

Probably they want to suck up to the next Govt.

Oh! Chatterjees and Banerjees or Mukherjees, Hindus are not your slaves to be bonded to your so called enlightened opinions. You are scum of humanity.
September 10, 2010 at 4:37 PM

Unknown said…
This is only part of the process. The Hindus need guns, ammunition, firepower, and of course, organization and discipline.
September 10, 2010 at 5:22 PM

jayanta said…
Thank you very much Hindu Samhati for mobilizing hindus against the barbarians. Protests should also be organised against the corrupt & selfish media.

Also, my appeal to HS to openly support & encourage all hindus in WB (and India) to vote for BJP to power and to get rid of both the minority appeasing corrupt parties in WB. In fact, BJP helped a lot to stop the murderers. All hindus of WB and India must promise that hindus should never ever be victim any more (even at the cost of their lives).

HS you can do anything...many many people can give their life for your nobel cause. Let's start a new beginning...freedom from decade long fear, anxiety & selfishness. Barbarians must be defeated. Satyameba Jayote.
Bande Mataram!!
September 10, 2010 at 8:23 PM

Anonymous said…
http://timesofindia.indiatimes.com/city/kolkata-/Huddle-of-peace-in-riot-scarred-Deganga/articleshow/6534506.cms#write
The Slimes now begins its shameless propaganda of creating imaginary Muslim saviours, while obfuscating the real identity of those so called hoodlums.
September 11, 2010 at 12:28 AM