Media Rumour About Attack In Barasat


Under the strong leadership of Sri Tapan Ghosh, Hindu Samhati organized a massive ‘Peace Rally’, ‘Deganga Chalo’ from Barasat to Deganga, where Hindus were brutally tortured, molested & looted by the Muslim miscreants allegedly under the leadership of Trinamool Congress MP of Basirhat, Haji Nurul Islam. The District and Police Administration was informed by Hindu Samhati well before the program, but Administration denied permission to HS, although it allowed other organizations to do so. Common supporters were hurt by the step-motherly attitude of the Administration towards Hindus.


The print Media spread rumors & brazenly distorted the truth to save Muslim miscreants & their supporters, a section of Trinamool Congress. VHP, Bajrang Dal, RSS & BJP were not involved in this program as distorted by the Media. It was purely a program of Hindu Samhati which never had organized any programme with the aforesaid organizations. The March advanced towards Champadali More after a mammoth rally addressed by the Samhati Leaders including Sri Tapan Ghosh, President of Hindu Samhati. Police repeatedly stopped the March at multiple places, but at last they stopped the March at Champadali More at the entry point of Taki Road. By then with the support of local Hindus & shop owners of nearby shops the rally swollen to a huge assembly of over fifteen thousand people. Against the Print Media report, which we consider to be fabricated & distorted truth, we want to say the fact as following:

1) No shops at Champadali More were broken by the Hindus. A few Muslim shop owners used abusive languages towards the rally drawing their ancestor’s name. Then the infuriated mob pelted few stones by which a glass of a shop has broken. Nothing more than that happened. The Media Report is totally fabricated & with vested interest.

2) No Maruti Van was broken by the Hindu Samhati Supporters.

3) From nearby Masjid of Champadali More, few Jihadi Muslims pelted stones on the mob & they have been paid back by their own coin. As a result few glass panes of the window of the adjoining Madrasa were broken. At the time of stone pelting from the Masjid on the protestors, any car on the road may be broken. The liability lies totally on the Jihadi Muslims.

4) The local residents of Barasat DID NOT resist the rally, rather local people of Barasat city spontaneously supported the move & joined the rally voluntarily. Shop owners voluntarily joined the rally after downing the shutter. As a result the rally swollen to a large group of over 15,000 persons & thundered the air by “Jai Sri Ram” & “Haji Nurul Door Hato” slogans.

5) No police were injured as alleged by “Ekdin”.

6) Only six workers were taken into custody & a false FIR were lodged against nine workers of Samhai including Tapan Ghosh & Upananda Brahmachari (Vice President, who was arrested & beaten up by the police later).

7) When Administration accepted the 10-point demand of Hindu Samhati, then Tapan Ghosh withdraw the plan to march towards Deganga & urged people to go back to their respective residences. When people started to go home, then the Police suddenly attacked the tail of the outgoing procession & brutally lathi charged (beat with sticks) so many workers as well as passersby. Then they arrested six workers of Hindu Samhati , one Auto car driver hired by Hindu Samhati & one drunken passerby. The last two have no relation with Hindu Samhati.


We strongly object to the rumor spread by the “The Times of India”, “Bartaman”, “Ekdin” & “Dainik Statesman”.

So we urge the people of Barasat, Deganga as well as people of West Bengal, not to pay attention to the rumor spread by the Media to save the Miscreants & support the Great Endeavor of establishment of Peace by the Hindu Samhati under the strong Leadership of Tapan Kumar Ghosh.

Anonymous said…
Media lost its relevance and they are proving it themselves everyday.

Media's point of involvement of RSS and its affiliated organizations and by this nature their implying it is a Hindu extremist rally deserves scorn, though they have nothing to do with rally in reality and this line of argument is purely ad hominem.
September 20, 2010 at 3:33 AM

Dibyajyoti said…
Many many thanks to Hindu Samhati.One good book I came across written by Arun Shourie,Ram Swarup,Sita Ram Goel: http://www.voi.org/books/htemples1/
It is a must read for everybody.
September 24, 2010 at 12:41 PM 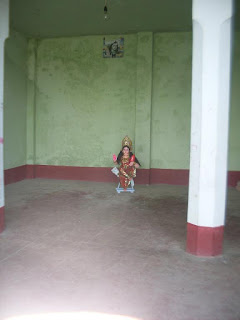