May 25, 2014
No immediate relief from mounting political oppressions is being found in the state these days; neither the reigning Trinamool Congress is letting its opponents heave a sigh of relief nor the parties in the opposition are sparing each other. Rising violent disturbances have brought forth another horror as well; in the majority of turmoil, if not more, Hindus have become the sole targets while Islamists remain busy to assail them as henchmen of oppressing parties. The reality portraying the horrid picture of Bengal is enough to send a shudder through the spine and, Samar Saha, wealthy farmer living in the village of Dhalla within Budhigram area, Margram police station’s jurisdiction in the district of Birbhum, is in despair at present. 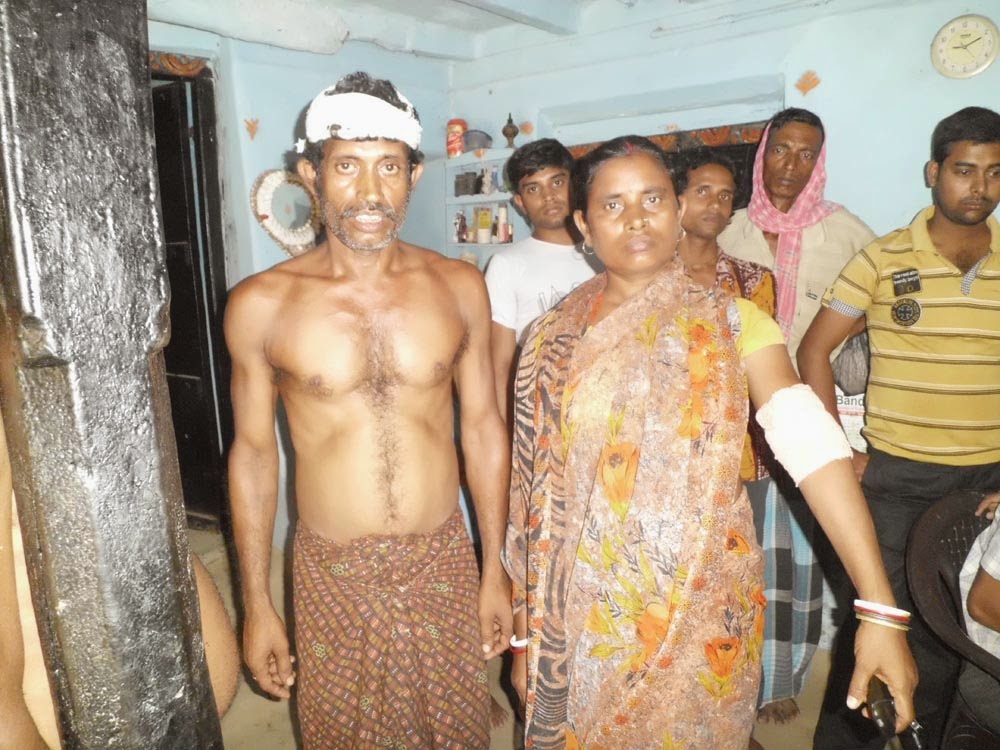 Samar Saha, it has been found, is the local committee secretary of Forward Bloc while his wife Purnima Saha is an Anganwadi worker. On May 18, at 11 am, Prasenjit Saha, son of Samar Saha, was returning from their agricultural fields in Budhigram. However, he had a brief tussle midway with a few drunk Muslim youths living in the neighboring village of Imamnagar. Prasenjit informed his father; Samar Saha reached the place soon and tried to calm the Muslim youths down. But it failed to have any response and aged Samar Saha was also insulted. Finding no other option, he phoned Kalam Sheikh, his friend and also head of the local Panchayat. The phone went on ringing; both of them returned silently.

What followed next was nothing except a disaster. At 7 pm, a complete hell was unleashed on the Hindu family by a group of Islamists led by Sheikh Alam (Congress member of the Panchayat) and Kalam Sheikh (old friend of Samar Saha). The group comprised 50 armed Muslim assailants who asked for Prasenjt at the outset. Samar had already asked Prasenjit to hide in a room and this act worsened the situation more. Furious at this defiance, Samar Saha was assaulted ferociously by Islamist henchmen and he started bleeding profusely soon. His head was struck by an iron rod. Women were also not spared; Purnima Saha was manhandled and if villagers are believed, she was molested virtually. Once neighboring Hindus turned up there and started defending, the group fled but prior to that they ransacked the residence of Swapan Mal, another Hindu individual, also.

As stated by sources, Kailash Mal (Congress member of village Panchayat) had learnt of developments in the morning and had premonition of another spate of attack in the same evening also. He assured Sheikh Alam to deal with the issue all alone and ask Prasenjit to beg mercy. Islamists were against any such amiable act and this got proved when they attacked the family to teach Hindus in the neighborhood a lesson.

A team of police from the Margram police station visited the spot later on and sent Samar Saha and his wife to the nearby hospital. An FIR was also lodged against Sheikh Alam, Kamal Sheikh and their accomplices but none of the culprits has been arrested yet. Even if neighboring Hindus are upset at this development, it is also undeniable that Samar Saha had a good relation with these Islamists also. On May 20, Tapan Ghosh, president of Hindu Samhati, as a part of his programs in Rampurhat, went to the residence of Samar Saha in the village of Dhalla and asked Hindus to fortify an active resistance to prevent more attacks in the offing.