Showing posts from July, 2013
Show all

Will there be any justice for Bhetku?

July 28, 2013
Bhetku Singh, the lone wage earner for his impoverished family was found dead under mysterious situation in the residence of Mohammed Imul on July 4, 2013. Both happen to be residents of the same village: Katna, P.S. Karandighi, P.O. Madargachi, Distirct: Dinajpur (North) and Behtku like his father Haladhar Singh worked both as a cultivator and manual laborer. Known as submissive and helpful to others, Bhetku was found hanging from ceiling in Mohammed Imul’s residence. The incident has not only stunned the whole village but has brought forth a few questions as well. The first of these happens to be his purpose at the residence of Imul, local contractor.   It is known to all in Katna that Bhetku went to New Delhi recently with Imul as laborer and after spending a few months there, he came back to the village. But the relation between them had soured by then.  Village sources reveal that a rupture took place between the two; Imul had to pay Bhetku a good amount of money still for
Post a Comment
Read more

July 28, 2013
Bail of culprit creates uproar As Shilpi (name changed) was talking to this scribe, she was just shivering while her eyes were moistened as well – perhaps this was due to her bleak future following instruction of her parents that she would not attend the school where she was happy till the morning of July 25, 2013. Shilpi of age 14 is a student of Class IV at Chengail Kiran Sashi Siksha Mandir where she was brutally molested at 10.30 am on the same day by Mohammad Lalbabu Munshi, son of Rashid Munshi and living in a village of Chengail, P.S. Uluberia. District: Howrah. It has been learnt,  Mohammad   Lalbabu Munshi went to the school at 10.20 am on last Thursday (July 25) alleging that his son is also a student of the same school. On the fateful morning, Shilpi went to the school with her sister earlier and the culprit, exploiting absence students then, went to the classroom directly, asked Shilpi to take care of his son. When Shilpi agreed, he took her into the clas
Post a Comment
Read more

July 25, 2013
Mohammed Ali Chisti, earlier Suresh Sahu, a new convert to Islam and resident of Hari Pal Lane, Kolkata – 700 006 has become the center of attention in his neighborhood and it is not only for he is going to organize Hazrat Astana Sharif Urs Mubarak marking the establishment of mazaar in his own residence. The way he propagates Islamic culture in the Hindu neighborhood has vexed his neighbors also and as per them, during the celebration of Urs on each year the demographic character of the area changes highly. Intrusion of truckloads of Muslims from other areas remains the main factor in this context. According to locals, Suresh Sahu and his wife (originally from Orissa) were party members of CPIM while living in Sodapara or Sankharipara and with that support he entered Hari Pal Lane in 1999. He purchased a residence there and in the initial years, he was found to be congenial. But the situation changed in 2009 due to a police intervention. It was learnt that he deceived bank loan
Post a Comment
Read more

Maniktala Hindus are clueless how to stop Mosque in Hindu area 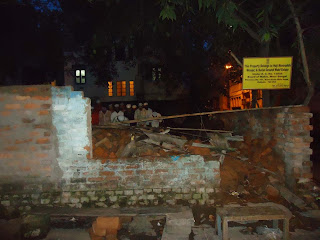 Maniktala Hindus are clueless how to stop outsider Muslims’ design to build a Mosque in Hindu area Maniktala (in north Kolkata) must be thanking the almighty only for it could avoid a battle royal between two religious communities today, July 23, 2013, in the evening as both got involved in a face off following the loud noise heard while offering namaaz at a land occupied forcefully by people belonging to the Muslim community. The situation worsened when a few of occupiers were found to park their bikes before a few shops intentionally. The entire dispute revolves around a land of 3.5 cottahs located at Maniktala Main Road and belongs to Mrs. Jyotsna Mitra, a Bengali woman. It has been learnt, among the entire stretch of land 2.5 cottahs belong to her family while the remaining belonged to a person named Haji Moniruddin who breathed his last almost 65 years ago. No heir of deceased Haji Moniruddin appeared to claim the land ever. The land enjoyed the same status for decades
Post a Comment
Read more

Youths beaten up mercilessly in Chandannagar while attackers roam freely

July 23, 2013
On   26th April at 8.30 pm , Bikram Hela, son of late Ramesh Hela, was going from Urdibazar to Jhaubagan Gali, P.S. Chandannagar in Hooghly district on a bike.  He was accompanied by two friends, Rama Hela, son of Raju Hela and Issu Harijan, son of Chandra Harijan. On their way, they were obstructed by a few bullies belonging to the Muslim community of Urdibazar. The gang was led by Sheikh Anwar, who is also the president of the minority cell of Trinamool Congress party. Even if Bikram and his friends pleaded with Anwar and his fellows to let them go, they failed to impress them. Suddenly a local goon named Sheikh Mannan struck Issu Harijan with a glass bottle after which he fell down and started bleeding profusely. Both Bikram and Rama were stunned at the intensity of the assault and tried to defend him from the goons. Following this, Sheikh Munna and Sheikh Helpo started assaulting all of them. At the same time, a group of Muslim youths led by Sheikh Parvez came out of Star Club
Post a Comment
Read more

July 20, 2013
Tangra, located in No 7 Shitgram, Roygunj block, North Dinajpur district, is a nondescript Hindu majority village although a few more than a dozen Badia Muslim families have been residing there. The main road to the local crematorium is beside an area where the Muslims are in a majority. A local mosque is located some 50 metres from the road and is frequented by local Muslims for years now. Recently, a move to relocate the mosque to a place much closer to the road caused uproar among the Hindu families as they perceived this as an attempt to prohibit access to the crematorium. Their apprehension is reportedly based on past experiences where their fears have come true.  What followed was a proactive defense by Hindus, the intensity of which troubled the local police and administration. To evolve a truce, a meeting was convened in the office of the block development officer of Roygunj, comprising representatives of both communities. Hindus present there protested vehemently against
Post a Comment
Read more

July 12, 2013
Cloth traders Palash  Bhattacharjee and Padma Bhattacharjee, residents of Bhatol village, P.S. Raiganj, North Dinajpur district of West Bengal were thrashed by  Aziz Ansari, Kalam Ansari, Chalua Ansari. It has been learnt that Aziz and his associates are land dealings agents and the Bhattacharjee brothers had used their help to buy a land in the village a few years back. They had paid the requisite dealer's fee to the agency and had since transformed the land to a glossy shop. However, on 4th of July, at around   8 pm , Kalam Ansari along with Chalua and Aziz went to the newly made shop of Palash and Padma to have the remaining part of agency fee that they claimed were still due. When Padma Bhattacharjee refused to pay them anymore citing that they did not owe them anymore, a tussle started between the two groups and within a short time, all three of them, backed by a few criminals who were waiting outside the shop for an opportunity, pounced down on the two brothers. While t
151 comments
Read more

RATHAYATRA GIFT FOR THE HINDUS OF KOLKATA 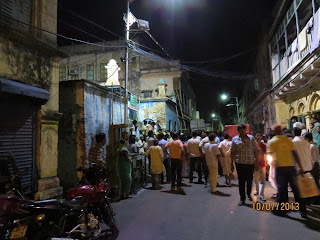 In the evening of Rathayatra 10 July at 7 pm, the office room of the Durga Puja & Kali Puja Committees in a fully Hindu area of Taltala in central Kolkata, all on a sudden, has been forcibly captured by breaking its wall by the Muslims to extend the small Masjid of 11A Doctor Lane, Kolkata - 14, PS - Taltala. The throne, images of the deities and other Puja materials and costly utensils kept  inside the office room have been desecrated and removed. Reportedly those are kept inside the Masjid. In this Doctor Lane every year Durga Puja and Kali Puja are organised in a big way by ‘Taltala Doctor Lenastha Puja Committees”. Seeing this totally unexpected and unwarranted audacious illegal act of the outsider Muslims, Hindus became puzzled and could not resist at first instance, because these large number of Muslims came from different areas by about 300 motorbikes, obviously to terrorise the local people. But ultimately the Hindus protested, and police stopped the illegal act. Aga
7 comments
Read more

Hindu Activist hounded out from residence in Rajarhat

July 09, 2013
Uttering words of protest against injustice and expressing one’s own opinion (as a citizen of India and also according to the Fundamental Rights as enshrined in the Constitution of India) has become a bane in Bengal these days and what is being done to the protestor can be said none except Santanu Basak, s/o late Tapan Basak, inhabiting village: Choto Chandpur, P.S. Rajarhat, District: 24 Paraganas (North), at the moment. Santanu is known as General Secretary of Vishwa Hindu Parishad in Block: Rajarhat and at the moment, he is fleeing his own residence with the entire family. His residence was assaulted, dashed while his wife, daughter were molested by a large group of 5,000 Islamists on July 5, 2013 at 9 pm. Sanatnu strived to publish a leaflet questioning whether Barasat, following spate of recent attacks on Hindu women – especially gang rape and murder of Shipra Ghosh in Kamduni, has turned into a mini Pakistan. What the handbill expressed was nothing except basic truth ha
2 comments
Read more

July 09, 2013
The recent assault and rape of Joba, a 35 year old resident of Dogachia village, P.O. Nakashipara, P.S. Nakashipara of Nadia by Haider Ali of the same village have brought forward the miseries of the entire Hindu community who appear to be living on the edge. The Hindus, represented by 70 odd household out of a total of over 1500, complain of police high-handedness and repression with no hope of justice. On 30 th   June at around   11 am , Joba (name changed) was on her way to the toilet in the nearby paddy field. Unnoticed by the victim, 32 year old Haider Ali, son of Wasaf Sheikh, followed her and while she was returning, Haider grabbed and dragged her back the field. Even though she put up strong resistance, Haider came out too strong and the victim was subsequently overpowered after he broke her right leg with a bamboo stick. Haider eventually raped her and fled. Even though she was terribly injured, Joba managed to raise an alarm and hearing the same, neighboring Hindus from nea
Post a Comment
Read more

July 02, 2013
A large cache of arms and ammunitions was caught red-handed by a team of 24 Paraganas (South) West Bengal Police on July 1, 2013. It has come to knowledge that the criminals (arrested already), Mohammed Salim Khan and Mohammad Shakil Khan, were moving towards Kultali in a bus (with the entire cache) where they were caught from. According to police, thanks to information from a private source, the team was awaiting the two at Taltala More, P.S. Canning; the bus was stopped and both felons were detained for the moment. What followed next was the discovery of 9 highly modernized firearms. These included 1 7MM pistol, 47 cartridges, 2 magazines and 5 kilogram gunpowder to make bombs. On the word of local people (on condition of anonymity), this is nothing new and it’s known to almost all that the entire cache was going to Shahjahan Khan, strong-armer and also known as hard-core Islamist in the locality, who lives in Jamtala, Kultali. And the responsibility of Shahjahan was to take th
Post a Comment
Read more
More posts