Showing posts from August, 2013
Show all

August 28, 2013
Mrs. Manu Naskar (25 year old), wife of Kartik Naskar, is a resident of Nimpith village under Block – II of Joynagar police station in 24 Paraganas (South) district. On 9 th   August at around   8:30 pm , she was returning from Nimpith market where the couple owns a retail garments store. Once Manu reached Ramkrishna Ashram Krishi Vigyan Kendra, Nimpith, she noticed that 3 youths, who were later identified as Muslims, were following her on a motorbike. Soon, they grabbed one end of her sari and also molested her. Sensing trouble, she called the local youth activist of Hindu Samhati, Kripa Sindhu Halder, for help while the miscreants parked their motorcycle a few yards away and advanced towards a petrified Manu. Halder gathered few of his friends and rushed to the spot and found helpless Manu Naskar encircled by the miscreants. After saving the victim, Halder went to the local C.I. office and sought help of RAF personnel stationed there. They also joined the local brigade of resi
Post a Comment
Read more

Doctor assaulted in Uluberia for failing to donate to celebrate Eid

August 21, 2013
An unruly mob consisting of members from Uluberia Junior Sporting Club thrashed distinguished child specialist Dr. Sourav Manna severely in his own chamber. The attack took place in the morning of 18 th   August after he refused to provide desirable subscription to them to celebrate Eid. Even though the doctor filed a complaint in the local police station of Uluberia none of the attackers, all of whom belonged to Muslim community, has been arrested yet.   According to local sources, Uluberia Junior Sporting Club organized a cloth distribution program on 8 th   August and a competition (including quiz) on August 9 to celebrate Eid. A day-long   football tournament was also organized by the club on 15 th   August 15 to observe Independence Day. Dr. Manna     alleges that the Club asked him to pay Rs. 3001 as a subscription. Expressing his helplessness, he donated Rs 750 but it failed to satisfy members of the club leading to the assault. The amount of money donated by the doctor had al
Post a Comment
Read more

August 21, 2013
Apart from ravaging economy and causing long-lasting harm to the society, ceaseless smuggling of cows to Bangladesh has become a terror to residents of border area villages as well. Residents remain afraid of terrible accidents as vehicles smuggling cows drive rashly without caring much for any traffic rules. Kripa Malik (age 33), wife of Sanjib Malik and inhabiting Bamunmura Dulepara area under Barasat police station, 24 Paraganas (N) district became the latest victim of the smugglers while walking past the road at around 6.30 pm on 5 th August.   While crossing the road to go to Bedubazaar market, Ms Malik was struck by a vehicle containing cows that was coming from Madhyamgram Chowmatha. The intensity of the strike was so extreme that Mrs. Malik fell on the road and started vomiting blood. With the help of passers and later joined by her family members, she was taken to Barasat Sub-divisional Hospital. However, owing to her critical condition, the very hospital counselled members
Post a Comment
Read more
August 20, 2013 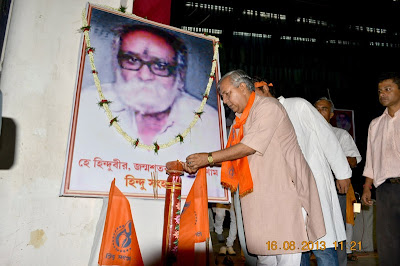 Saturday, August 17, 2013 Spirited veneration denotes Gopal Pantha’s commemoration A fully packed Mahajati Sadan auditorium signaled the success of Hindu Samhati's attempt to commemorate the glorious acts of Gopal Chandra Mukherjee after the infamous Direct Action day. On 16th of August, 1946, he valiantly took up arms in defense of fellow Hindus in Kolkata gainst the pro-Islamic government Bengal that schemed to uproot Hindus from Kolkata and its neighborhood. 68 years later on the same date, members of Hindu Samhati as well as ordinary citizens of Kolkata and suburbs gathered at Mahajati Sadan with a single mission to honor the great hero of Bengal and pay homage to his services on that fatef Swami Pradiptanandaji Maharaj from Bharat Sevashram Sangha, Prof. Saradindu Mukherjee from Delhi University, Ashok Mal and several others including relatives of Gopal Chandra Mukherjee. The convention was presided by Tapan Ghosh, president of the Hindu Samhati.  The event bega
1 comment
Read more 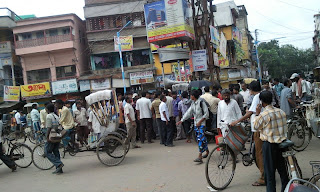 On August 10, 2013, Katwa, renowned sub divisional town in the district of Burdwan, witnessed a communal problem. The problem started in the morning at Madhabitala area of the town when one vendor Jubai Seikh was found to misbehave with and also slam a Hindu woman buyer. To save her, Sadananda Roy, a Hindu shop owner of Sridhar Bhandar, came forward and beat the vendor. To avenge this, a large number of Muslims from nearby Katoapara turned up there soon and started plundering without more ado. Rs. 30,000 in cash and other articles have been looted by the rampaging mob from that shop. While the shop of Sadananda Roy was ravaged, he and other Hindus present there were also beaten hollow. The news of such a brutal assault did spread like a wild fire. Hindus, remaining witnesses to mounting tortures and rape/molestation/murder of poor Hindu women of late, got infuriated soon. Their anger got expressed through a leaderless but terrible defence raised against Muslim culprits.  Members of
Post a Comment
Read more

August 01, 2013
Protest against bail of molester grows violent in Chengail Police van ransacked; 2 arrested  Following the unexpected release of Mohammad Lalbabu Munshi (culprit of molesting Shilpi – student of Class IV at Chengail Kiran Sashi Siksha Mandir) and unwillingness of both school authority and police to ensure safety of girl students in the locality, simmering anger of people burst out on July 31 morning when local youths brought out a protest march against brazen developments. Local youths went to both Chengail Kiran Sashi Siksha Mandir and Chengail Sri Vidyaniketan High School (opened after Panchayat election and counting) to close down the two educational institutions as a mark of protest. Even if an examination was going on in the high school, school authority folded the institution to support the protest march. It has been learnt, local police was phoned repeatedly to be a witness to the protest. But their late arrival proved to be enough to deteriorate the situa
Post a Comment
Read more
More posts