Showing posts from July, 2014
Show all

July 31, 2014
It was only 29 th July, 2014, we published a report in this site with a title “ Please Help To Find Out This 14 Year Old Victim Of Love Jihad ” and urged people to help us to trace the Love Jihad victim – Sunita Halder. The report also included a letter from the abductor – Babu Mandal where he challenged the Hindus to find them out. Hindu Samhati accepted his audacious challenge and mounted tremendous pressure on Joynagar Police to trace the girl. Police, at first, was not very keen to take the matter seriously and also made some frivolous stories like the girl was having an affair with the abductor but finally, they succumbed to the unified Hindu pressure engaged by Hindu Samhati. On 31 st July, police thoroughly questioned one of the brothers of Babu Mandal and came to know the whereabouts of the abductor. Later in day, Sunita Halder was recovered by police from the captivity of the love jihadi. Hindu Samhati is not going to let the matter end here. We are going to explor
Post a Comment
Read more 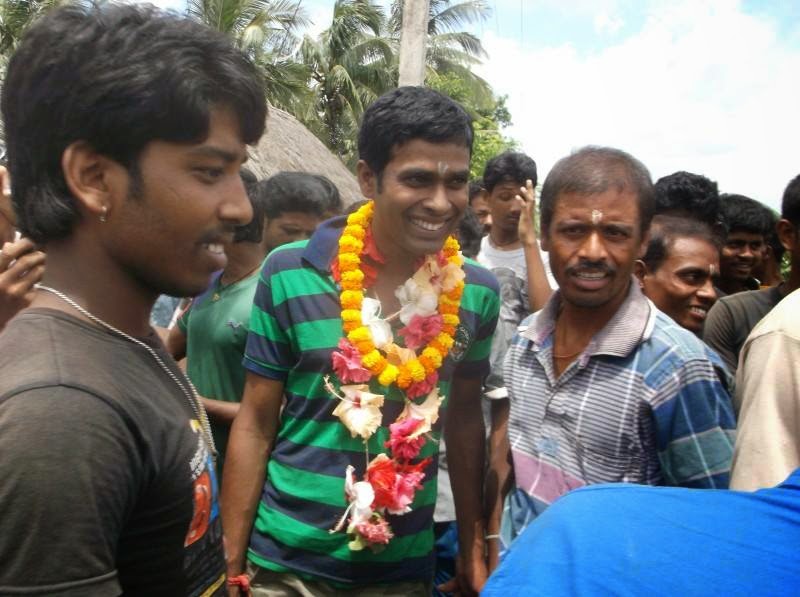 Hindu Samhati activist Milan Ojha got bail from Alipore ACJM Court on 30 th July, 2014 in all 3 cases pending against him. He was arrested by police of Basanti Police Station. Villagers were extremely aggrieved and protested against police. However after spending 14 days in Alipore Central Jail, he got bail and came out of the jail at around 8 PM. He was    taken to the residence of Hindu Samhati President, Sri Tapan Ghosh to stay for rest of the night as transportation was not available to take him back to his village so late in the night.   In the next morning Milan went to his village accompanied by our other workers. He got a heroic reception in his village because the villagers are well aware that their village boys are being jailed because they created HINDU RESISTANCE, which is almost nonexistent in other places. Hindus of the entire area are suffering for decades by the fundamentalist Muslims.  It is to be kept in mind that these Muslims are not Bangladeshi Muslims
Post a Comment
Read more

West Bengal & Tamil Nadu are headed for a dark future 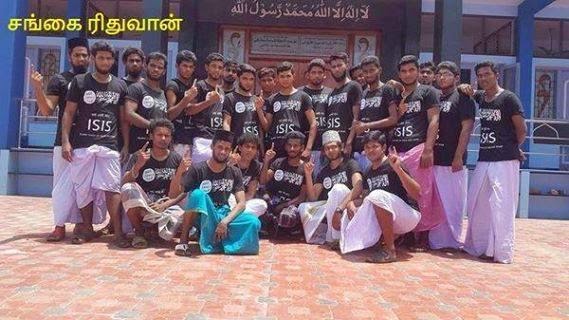 This is not Arab or Iraq, this is Tamil Nadu where young Muslim men are proudly displaying their support to ISIS – the terrorist organization responsible for killing of thousands of innocents in the name of Islam. No surprise, our secular administration is still searching in the law books if this amounts to any violation of law & order. A few months back, Dr. Subramanian Swamy rightly said that the ”condition of Tamil Nadu and West Bengal are quite similar”. Both the States are under virtual control of jihadis. It’s only a matter of time when Islamists shall demand a separate portion of the state for them. To add fuel to the fire, West Bengal Govt. is hell bent to appease these jihadi separatists for the sake of it’s vote bank politics.  Be it honorarium to Imams (which was later quashed by the High Court and subsequently being distributed through Wakf Boards) or distribution of cycle to minority girl students, Mamata Banerjee led Govt. is leaving no stone unturned to
Post a Comment
Read more 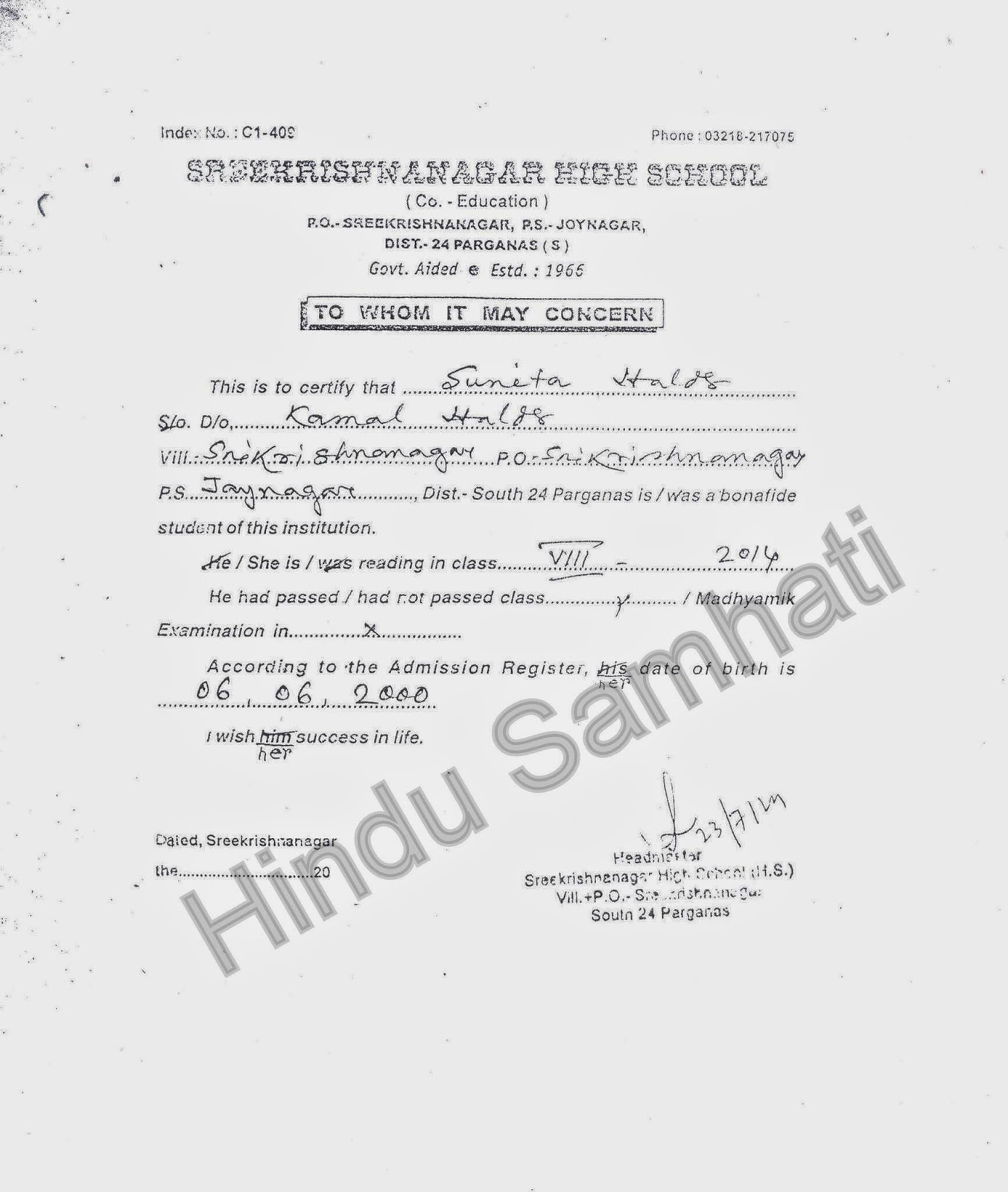 age proof Challenging letter of Babu Now it is the turn of 14 year old girl Sunita Haldar who became victim of 'Love Jihad'. She is a student of class Nine and belongs to a poor family Srikrishnanagar village under Joynagar Police Station in S outh 24 Parganas district. Sunita has been kidnapped by one Babu Mondal, son of Yar Ali Mondal of Chatra village on 21st July evening. According to Sunita's mother's complaint, Babu's brothers Jiyarul, Sirajul and Ajijul helped Babu to kidnap her daughter. Although Joynagar police station registered the case, but the concerned officer (Investigating Officer) is absolutely reluctant to recover this minor aged girl.  Among hundreds & hundreds of this type of Love Jihad incidents, this is an extra ordinary case, because the kidnapper sent a letter addressing all Hindus in which he said that he lifted the girl challenging a Hindu boy of that locality. He also wrote that he has already married the girl. In thi
Post a Comment
Read more

July 29, 2014
Hindu Samhati has been successful to add another feather to its crown. This time it was the recovery of Mansa Bhunia (age-17 year) of Uluberia who became a victim of Love Jihad – a pan-Islamic process to change the demography of the State in a planned manner. This is 4th Love Jihad recovery by Hindu Samhati activists in last few months. Once the case of elopement was reported to Hindu Samhati, the President – Sri Tapan Ghosh, who always believes that the loss of a girl is a loss of a generation – engaged all his resources to trace the girl. Finally, she was tracked at Basapara under Nanoor Police Station in Birbhum district. Hindu Samhati is very much thankful to police officer Sri Prosenjit Ghosh of Basapara outpost of Nanoor PS. But for his genuine and courageous help, it would be extremely difficult to get back the girl from Hasmat’s (love Jihadist) house in Dandupara village. When Hindu Samhati activists along with police reached the house of Hasmat, about 50-60 Muslims fro
Post a Comment
Read more 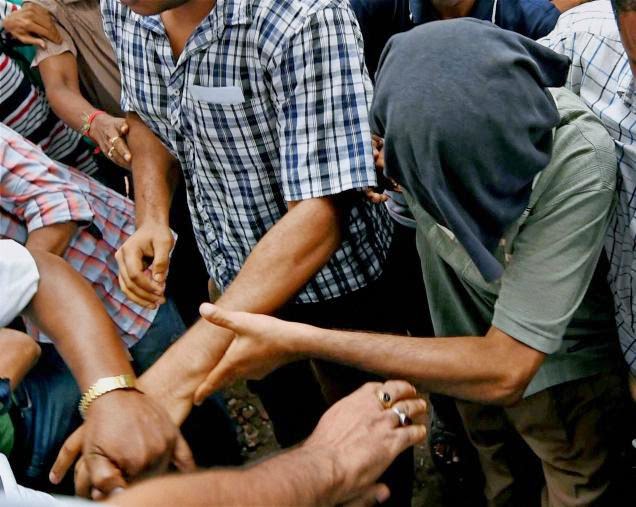 While Nur Hussain, convicted with the murder of 7 persons at Narayangunj in Bangladesh and arrested later on along with his two accomplices namely Zaman and Selim from Kaikhali, Kolkata, is reeling in a judicial custody of Bengal now, the state is afflicted once more with the arrest of Zahid Hussain, an IM (Indian Mujahideen) operative hailing from Bangladesh and arrested from Kolkata railway station by the Special Task Force of Calcutta Police. It has been learnt, Zahid Hussain belongs to the Darbhanga module of Indian Mujahideen, a banned outfit in India maintaining strong links to dreaded Pakistani terrorist group Lashkar-e-Taiba. In accordance with sources in intelligence department, Zahid Hussain worked as a courier regarding the blast at German Bakery in Pune on February 13, 2010. He supplied explosives there single-handedly. And these arrests have debunked the perpetual abnegation of illegal infiltration from Bangladesh, both by indigenous administration and Bangladeshi go
Post a Comment
Read more

July 04, 2014
Islamist molests two girl students, take their nude photos Time is changing fast in Bengal and ostensibly the gloomy days of 1946-47 are returning yet again to ravage Hindus. While on one hand Islamists are found almost daily to pounce down on Hindus and especially Hindu girls and women, treasured (?) MPs like Tapas Pal, on the other hand, are admonishing to use rape as an instrument to inhibit political opponents. The cult of using rape as a necessary tool of action emerged in the violent days of partition in 1947 and by the efficient machinery of (then) Muslim League and its first success was the pogrom against Hindus in Noakhali, 1946. Almost seven decades have passed from that calamitous episode by now but history is yet to know the complete account of atrocious ravishments of Hindu and Sikh women, mostly in Bengal and Punjab. Of late, the husband of a teacher involved at a child school was arrested owing to molesting two girl students of the same school along with taking
Post a Comment
Read more

Surrender leads to annihilation only

July 02, 2014
ISKCON sets a new example thus Hindu religious organizations have always been witnessed to have confidence in all, never demarcate between coreligionists and aliens and emphasize sanctified notions of love and universalism casting aside potential of any violent counterattacks. This practice has been going on down the centuries despite rendering no benefit thus far. There is no hope of such also. And the reason behind these all is not far to see. The chronicle of benevolence intrinsic in Hinduism has been interpreted wrongly always. It has always been discerned as akin to cowardice or gutlessness and this understating has become a readymade tool for anti-Hindus to maim the Dharma, its basis and also its adherents. Whether in India or Pakistan or Bangladesh or any other part of the globe, this has been the painful tradition. The inherent dilemma to stand upright in support of Hindus came forth again when Mamata Banerjee, Hon’ble Chief Minister of Bengal, was seen to join the Ra
Post a Comment
Read more
More posts