Showing posts from February, 2010
Show all

February 26, 2010
My Dear Hindu Brothers and Sisters in Bengal: Saadar Pranaam! On behalf of the Hindus in America and the Indian American Intellectuals Forum, it gives me a great pleasure to know that on February 14th the Hindu Samhati has successfully completed two years of its valuable service to Hindu Samaj. We are happy to note that in these two years the Hindu Samhati has awakened a new sense of confidence and pride in the Hindu people of Bengal. Bengali Hindus now feel themselves confident and a power to reckon with. We from America congratulate you for reinforcing a sense of unity and consolidation within the ranks of Hindu society in Bengal. As you are fully aware we are the worthy descendants of great Rishis and Munis of Bharat. Our Hindu Dharma is the mother of all religions. It has no rigid dogmas and it adjusts itself with the needs of the time and situations. The history is testimony to the fact that whenever there was a decline of Dharma and the Adharmic forces rose, Dharma has orga
1 comment
Read more

February 22, 2010
Numerous illegal cow slaughters have taken place at the Chhoto Mahara village in the Amta Sirajbati area of the Howrah district on the occasion of Eid on 28th Nov 2009 . No cow slaughter has ever taken place in this village, yet on that day 12 to 15 cows were slaughtered, cocking a snook at both law and Government decree. Albeit a meeting took place the day before at the BDO (Block Development) Office with the members of the Thana (Police Station area) Committee and the local leaders where it was decided that no cow slaughter would take place in the village during Eid. The BDO, Mr. Sanjay Mukherjee was present at the meeting and gave his solemn assurances towards this decision. Why and how did such an outrage happen? In this village Hindus and Muslims live side by side. The Hindus never apprehended that cow slaughter would take place despite the decision taken at the meeting and solemn assurances by the BDO. When the agitated Hindus notified the Police, a force was immediately di
Post a Comment
Read more

February 16, 2010
Press Release Hindu Samhati's Second Anniversary Celebrations February 14, 2010----Shraddhananda Park, Kolkata, India Beginning of a New era for the Hindus in Eastern part of India In its grand success of the 2nd anniversary of Hindu Samhati at Shraddhananda Park in Kolkata, a strong 12 thousand Samhati supporters, activists and sympathizers participated in this mega event very with full enthusiasm and gusto. Hindu saints, prominent leaders, human rights activists from the different corners of India and abroad adorned the august dais to support and promote the rising force of Hindu Samhati, struggling for liberation of Hindu masses from the clutches of Islamic Jihadi force and pseudo-secular anti-Hindu political parties. The Hindus under the banner of Hindu Samhati strongly opposed the 10% Muslim minority reservation on religious basis and the heinous planning of Islamic encroachment upon Hindu life in Bengal in all respect. The deprived Hindu masses came from all corners of B
Post a Comment
Read more 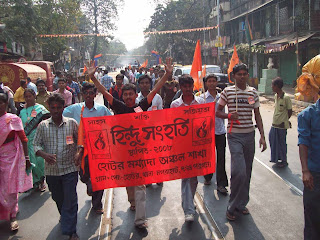 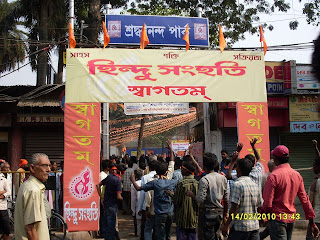 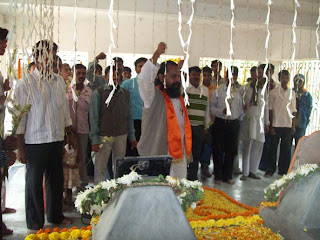 The reminiscence of Sonakhali Martyrs are still alive in the public. Sonakhali, 10th Feb 2010 || At a black dusk on 10.02.2001, four Swayamsevaks of RSS were martyred by the fundamentalist Muslim goons at Sonakhali village under Basanti Police Station in South 24 Pargana dist of West Bengal. As a repercussion, the angry Hindus of the village drove away all the Muslims from that village. Later on, this was known as 'Sonakhali Line'. For the last two years Hindu Samhati has been organising the Sonakhali Martyr Day, when the State RSS abandoned this programme from their annual agenda since 2008. As a result no RSS office bearer visited Sonakhali Shaheed Mandir to pay homage to the Martyrs this year also. Hindu Samhati organised two separate programmes this year, one in 2 No. Sonakhali and another in Pitchakhali Primary School near the Smriti Mandir of martyr Avijit sarder, Patitpaban Naskar, Sujit Naskar and Anadi Naskar. This year the portrait of Biswanath Mondal of No
4 comments
Read more
More posts