January 28, 2012
Devi Saraswati is the Goddess of arts, music, knowledge, and wisdom in Hindu Dharma. Devi is regarded as the divine consort of Lord Brahma, the Creator of the universe on the word of the Hindu Dharma, as well. Being the greatest destroyer of disorder, She is also highly revered.
On the auspicious day of Sri Panchami Devi Saraswati is worshipped in each Bengali Hindu residence.
We bow to you Mother in reverence. 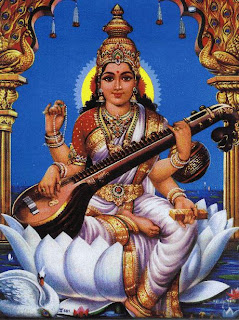