A time comes when remaining idle is not considered as cowardice only but a betrayal to the greater causes, especially when the existence of particular community is at stake.

The rejections of bail pleas of Tapan Ghosh, president – Hindu Samhati, following his unethical arrest on March 14, 2013, on flimsy grounds make the presence of a brutal gambit (under the aegis of administration) behind it apparent. On every day, fragile causes to cancel the petitions are brought to the fore and that the main intention behind the scene is to delay his detention as far as possible gets evident.

The situation, at the moment in Bengal, is such when law-abiding Hindu citizens are being denounced day in and day out and if they proceed to the highest form of judiciary for justice, they are mocked. Continuing sufferings of Tapan Ghosh happens to be the greatest exemplar at this hour; hence, the fate of common Hindus and also their future in Bengal can be deciphered readily.

We, Hindus in Bengal, are in a time when the satanic clique at the helm of affairs in the state is hell-bent to destroy us. And the judiciary remains a brilliant option for them to go on with their devilish agenda.

It’s, therefore, the correct time to PROTEST and launch a vigorous people’s struggle to secure justice.

It’s a TIME when the battle ought to happen in streets as the hope on judiciary for a free and fair justice is declining steadily.

Unless we triumph in this deadly struggle, not the hope of releasing Hindu Samhati president will end only but with the eclipse of last citadel of Hindu Struggle in Bengal the Hindu basis will come to an end also.

It’s your day to PROTEST, your solemn duty to make the state government realize that Hindus and their struggles have no end; each repression on them strengthens their resolve only to have justice, no matter what.

WAKE UP Hindus from your age-old slumber as only a Hindu can save another Hindu in this cosmos.

100 crores of Hindus must raise their 200 crores of hands to stop this Curse of Oppression.

"When the People Fear their Government, there is Tyranny.” "When Injustice becomes Law, Resistance becomes Duty." 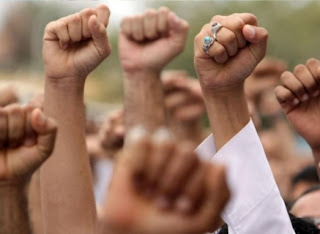