Soldiers were deployed in northern Bangladesh on Sunday after five people died in clashes between police and Islamist party activists during a nationwide general strike called to denounce war crimes trials. Seven people died in similar clashes in the north-west, police and news reports said.
With the latest casualties, the death toll in four days of rioting climbed to 58. The clashes began on Thursday after a war crimes tribunal sentenced a leader of Jamaat-e-Islami, Bangladesh's largest Islamist party, to death for atrocities committed during Bangladesh's 1971 independence war against Pakistan.
To Know More Please Read: 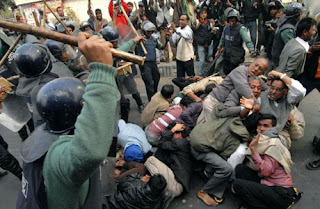